Lionsgate Home Entertainment // Unrated // February 23, 2010 // Region 0
List Price: $39.99 [Buy now and save at Amazon]
Review by Stuart Galbraith IV | posted March 3, 2010 | E-mail the Author
An intriguing, mildly controversial Showtime series that's like a postmodern variation on Paddy Chayefsky's The Hospital (1971), Nurse Jackie (2009-present) is over-stylized in some respects and a bit too self-consciously hip in others, but it also admirably breaks away from the usual hospital dramedy format in innovative ways, and star Edie Falco is excellent in the title role.

The Lionsgate Blu-ray is above average, offering a strong (though easily misunderstood) transfer and decent extra features. 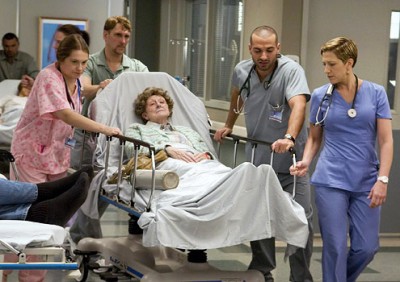 Middle-aged wife and mom Jackie Peyton (Falco, formerly of The Sopranos) is a veteran emergency room nurse at Manhattan's All Saints' Hospital. She's also a drug addict with chronic back pain, hooked on painkillers and other more recreational drugs she gets from pharmacist Eddie (Paul Schulze) in exchange for regular sex at the workplace. (Jackie takes her wedding band off each morning before work; most assume she's single.)

Jackie has a lot to put up with. Dr. Cooper (Peter Facinelli) - "Coop," as he likes to be called - is an insufferable, self-absorbed "golden boy," the kind of doctor who daydreams about a set of golf clubs instead of focusing in on your tumor; Zoey (Merritt Wever), a well-meaning but hopelessly naïve and mousy first-year nursing student; insensitive, meddling hospital administrator Gloria Akalitus (Anna Deavere Smith); and Jackie's best friend, Dr. O'Hara (Eve Best), a stylish Brit more obsessed with outrageously expensive clothes and gourmet food than her patients.

Meanwhile Jackie tries to balance work with a home life for which she leans heavily on bar-owner husband Kevin (Dominic Fumusa), especially to care for their two daughters, Grace (Ruby Jerins) and Fiona (Daisy Tahan).

Not surprisingly, the New York State Nurses Association (among others) have criticized the show and Jackie's unethical behavior, which besides her workplace substance abuse includes overstepping her authority and/or violating hospital policy in just about every episode. In the pilot, for instance, she flushes a patient's severed but salvageable ear down the toilet when he turns out to be an unrepentant wife beater.

However, these liberating and admittedly crowd-pleasing moments are not meant to condone Jackie's behavior. Indeed, there's an interesting edge to the series because of the constant fear Jackie's drug abuse will be discovered, that the husband will learn of the affair, or that her behavior is putting her kids' lives at risk (she hides pills on top of the medicine cabinet and in other parts of the house). It wouldn't take much for Jackie's precipitously balanced life to spectacularly unravel into total ruin.

The supporting characters are painted in broad if amusing strokes, but Falco's Jackie is complex and realistic, a character who sees her severely flawed workaday world for what it is, knows that she does her job well and what she's got to do to provide the best possible care for her patients. Conversely, though confident that she's got her private life under control, Jackie seems almost defiantly clueless about the potential consequences of her behavior. It's a funny, believable, and fully dimensional characterization, and Falco fleshes it out in every scene she's in.

The show has some extraordinarily witty, biting dialogue, material funny and insightful, though it frequently gets drowned out by what's intended as hip cynicism, the kind of thing Nurse Jackie could use a lot less of. Early episodes also go a bit overboard with flashy, heavily stylized editing vignettes, typified by the series' surreal opening titles, with capsules and Jackie's wedding ring floating in slow motion in a kind of hospital-sanitized vacuum, inter-cut with extreme close-ups of Falco's face.

Conversely though, it's refreshing to see a hospital drama not shot at all like ER and its ilk. The chaotic, hand-held camera, guerilla style of those shows has been replaced by a much more sedate and even classical approach, with longer takes and more stationary shots in most scenes. Also bucking the trend in these high-def days, the show's cameramen have adopted a style favoring shallow- rather than deep-focus photography, which adds to Nurse Jackie's unique look.

One last note: Episodes run about 26 minutes each (the pilot runs 29 minutes). This is how long half-hour shows were back in the 1950s and '60s, before encroaching commercial interruptions reduced the number to 24 and, finally, to around 21-22 minutes. Those extra four-five minutes are critical for the drama; Nurse Jackie works great in a 26-minute format and it made me wish more current series could return to this highly pliable running time, which is just perfect for programs like this.

Nurse Jackie - Season One is presented in 1.78:1 widescreen in 1080p high-definition. As stated above, some have mistaken the preference for shallow-focus photography as a too-soft transfer, but I like this look. Twelve half-hour episodes are presented on two single-sided, region-free discs, supported by optional English and Spanish subtitles. The 7.1 DTS-HD Master Audio is impressive, though I could do without the format's logo at the head of every episode.

Supplements include several featurettes, all but one in high-def: the self-explanatory "All About Edie" and "Prepping Nurse Jackie" are good if brief behind-the-scenes reports; "Unsung Heroes," and "Nurse Stories" (the latter in SD) are a perhaps preemptory effort to deflect criticism of Jackie's character by "paying tribute" to the nursing profession. All together they total about 30 minutes worth of material. Also included are cast and crew commentaries for four episodes, but these have limited value. Things like this really need a moderator to ask probing, intelligent questions, rather than stick a microphone in front of the filmmakers and expect them to wing it.

A good series that gets better with each episode, Nurse Jackie shows a lot of potential, while star Edie Falco nails her character from the start. The Blu-ray offers a spot-on presentation and overall is Highly Recommended.