When you get a title like Zombie Self-Defense Force in the mail, there is a certain amount of tongue that you have to put in your cheek. Hell, take a look at the zombie Toshiro Mifune on the DVD cover (on the right), that should give you an idea of what you'll experience. With that said, I did not expect that the title would be as literal as it was.

The basic story is easy to follow; a UFO crashes into the Japanese wilderness, its radiation turning any corpse into a flesh-eating zombie. The movie follows a variety of people, including a man, who, while at his home with his mistress, finds out that she's pregnant, a pop star (and her entourage) in a photo shoot and members of a military or other self-defense force who are attempting some sort of land navigation exercise. Oh, I almost forgot about the yakuza who is about to whack a guy. So when some of the people in these small groups are killed, they quickly return as part of the zombie army, because there are scores of bodies that have been buried in the woods through the years. Apparently the Japanese have a great yearning to recreate the "Thriller" video or something. 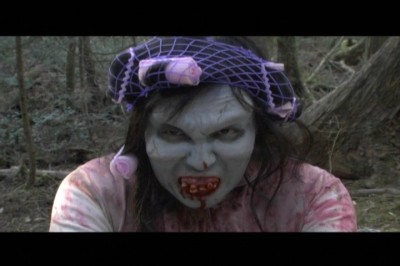 There is an opening monologue in the film that rambles on about America's proclivity for war and expresses disgust that the Japanese cater to this American urge in exchange for protection by the U.S. in the event of more personal attacks, but the monologue ends with a statement about the filmmaker's love of George Romero. I mention this because the events in the film help set up a kind of bunkering-down in the home owned by the man with the mistress. They deal with many of the mechanisms that Night of the Living Dead did; people being bit and trying to lock all the doors so that the zombies don't get in. I use the word "lock" because all the doors and windows have 5-foot pieces of glass in them, so apparently zombies can come back from the dead but aren't strong enough to break a glass window.

I'd be remiss if I didn't mention what might arguably be the best movie character I've seen so far in 2010. The mistress gets killed, becomes a zombie, and gets killed again. Then her baby delivers itself, emerging as a zombie fetus. The best way I can describe it (other than directing you to the screenshot below) is that it's just like Kuato from Total Recall, if he came out of the guy's stomach with a 50-foot umbilical cord that can be used as a weapon. Never have I rooted more for someone on the screen for such a short time. It's the most awesome thing. 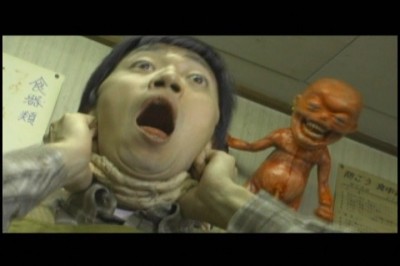 Past that, the film revels in all things gore; blood shoots from arteries as if it were forced by garden hoses; zombies stagger around in a Romeroesque march, occasionally performing tasks that they were doing in their last moments, like styling hair, shooting pictures or making phone calls. But while the filmmaker's introduction indicates that he looks up to Romero, there are nods in the film to John Carpenter, Quentin Tarantino, Sam Raimi and others. Many of the actors don't appear to be acting, at least in the sense that they can't, but they attack the silly dialogue with much gusto, without a hint of subtlety.

Yet there's something about Zombie Self-Defense Force that can't help but be entertaining. It's because it's so bad that you enjoy how bad it is. It's purposely implausible, and you can spot continuity holes big enough to drive a Bradley through, but if you haven't discovered that when looking at the disc cover, then you've probably stopped reading by now. For mindless fun by mind eaters, this sure does bring the fun. 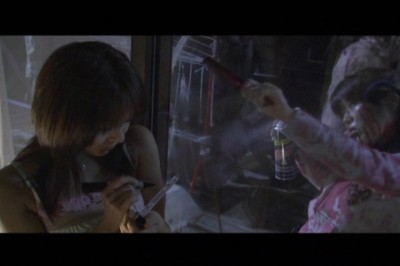 
We'll call this a non-anamorphic widescreen viewing and leave it at that. Honestly there's not much to expect from viewing this; all the cheesy effects are reproduced clearly, there hasn't been any noticeable transfer cleanup, it's almost as if someone just rushed this onto a DVD or something...


Two-channel stereo that sounds a little better than I was expecting. The film does take advantage of speaker panning here and there, and when the UFO crashes, there's the slightest low-end punch in the soundtrack. But otherwise, this reflects the production values accurately, meaning that there's not much to be surprised by.


Zombie Self-Defense Force is less about the self-defense force and more about the actual zombies, but it's full of cheesy entertainment that makes most of its 76 minutes more enjoyable than unendurable. If you're looking for popcorn zombie flicks that you can heckle and are brought to you by the letter B, this is right down that path. 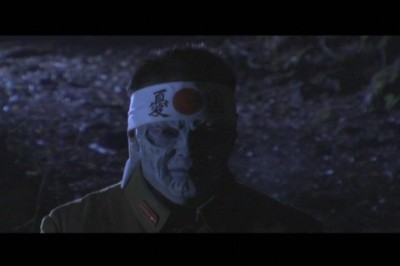