Truth About The Philadelphia Experiment, The

A guilty pleasure of mine is that I can't resist flipping on a documentary about UFO's, aliens, Area 51, conspiracy theories, ghosts, and other paranormal subjects whenever I see them on the guide. The Philadelphia Experiment is one of those topics that I love watching shows about. It's not as if I believe in any of these things. I'm a firm advocate of "extraordinary claims require extraordinary proof" and I have never seen a piece of evidence presented in any of these shows that I'd qualify as extraordinary proof. Still, I usually find these documentaries fun and enjoy playing "what if" while watching them.

The Truth About the Philadelphia Experiment is produced by paranormal researcher Bill Knell and Reality Films, who specialize in DVD's about paranormal and pseudoscience subjects. The majority of the film consists of an interview conducted in 1989 with Preston Nichols, Al Bielek, and Duncan Cameron who claim to have been a part of the Philadelphia Experiment and its follow-up experiments, including the Montauk Project. 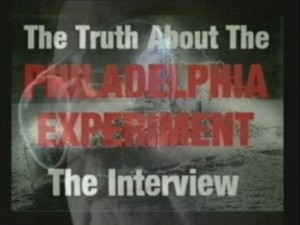 The mythology surrounding the Philadelphia Experiment began in 1943. Conspiracy theorists allege that the United States Navy conducted experiments to make the naval ship, the USS Eldridge, invisible. The experiments were allegedly based on Albert Einstein's Unified Field Theory to cloak the ship by generating a magnetic field around the ship. The experiments were supposedly successful and one side effect was that the USS Eldridge was teleported from Philadelphia, Pennsylvania to another shipyard in Norfolk, Virginia.

A bulk of the interview focuses on Preston Nichols and his experiences as an engineer on the Montauk Project. Nichols spends a great deal of time discussing the technical details of the experiments. He was the most difficult speaker to listen to; his stories were hindered by technical jargon and he made little effort to help the viewer understand. He could definitely take a lesson from science documentary personalities such as Michio Kaku in how to help audiences understand complicated ideas. Since these interviews took place, Preston Nichols has authored a series of books on his alleged experiences in the Montauk Project. 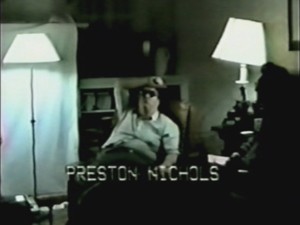 This is not the proper forum to debunk the claims made on this DVD. Let's just say that the stories manage to touch on a wide variety of popular topics in the paranormal world: secret government experiments, aliens, alien technology, UFO's, Stonehenge, mind control, and time travel. As if all these topics weren't enough, the producers of this film postulate that Al Bielek may have prophesized the 9/11 attacks during the 1989 interview. Bielek discussed being transported to 6030 AD where he saw an empty city with a golden horse statue in the middle. At this point, text pops up over the video hypothesizing that this may somehow be a 9/11 prophecy.

The video and audio on this DVD are of such poor quality that it completely distracts the viewer from the stories. The interview was conducted in a living room that had what appeared to be a white bed sheet as a backdrop and a few house lamps to provide the lighting. Bill Knell added a short introduction that explains the Philadelphia Experiment and then shows the whole three-and-a-half hour interview in its entirety, uncut and unedited.

The interview itself is incredibly amateur and difficult to watch. Aside from the terrible audio/video quality, the interview is filled with distractions. Throughout the video, people try to crawl under the view of the camera to adjust the microphone and then, inexplicably, walk right in front of the camera after all that effort. The fade-out transitions between interview subjects are a few seconds long and make you think the video is dropping out instead of just switching views. A few times Al Bielek's name is displayed misspelled as Al Bialek. Preston Nichols at one point even picks his nose. Yet, the producers saw no reason to edit out any of these occurrences. 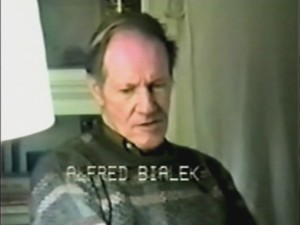 There is one section, however, that is completely removed from the video. The interviewer asks about U.S. Government drug experimentation on the subjects. This wonderful question would likely be at the top of the minds of many viewers considering the claims made here. When Preston Nichols begins to answer the question about the drugs' euphoric effects, there is a rather jarring cut to him talking about aliens and alien technology. This was probably the question that piqued my interest the most and I was greatly disappointed that a portion of the answer was cut out. To be fair, I have never seen the original video, so I'm not certain if this edit was made by Bill Knell, Reality Films, or whoever originally filmed the interview.

Reality Films would have been much better off putting a little effort into the production of this video instead of merely piecing together a slideshow introduction. They could have easily gone the route of more modern documentaries by gathering some experts to summarize the claims made in the interview and then give their opinions about the stories that are told. They could have then added in highlights from the videotaped 1989 interview and perhaps include the entire interview as an extra.

Sound: The audio is simply atrocious. Many times you can barely distinguish what is being said in the interview. The sound is muffled and filled with hissing. The introduction scene has an annoying chirp that seems to occur every couple of minutes, as if the narrator forgot to change the batteries in his smoke detector. The audio is mixed in two-channel stereo, but it might as well have been in mono.

Video: As bad as the audio is, the video is even worse. The interview was very obviously recorded on a camcorder in 1989. The lighting is terrible and the video is blurry and shaky. The producers added in an introduction and a couple of popup commentaries, but the poor quality of their additions somehow matches the source material.

Extras: There are no extras--there's not even a menu or scene access. The video begins and ends with a promo for other Reality Films documentaries.

Bottom Line: The sole reason I didn't turn The Truth About the Philadelphia Experiment off after the first thirty seconds was to write this review. Average viewers will have no patience for this documentary. The audio/video quality are among worst I have ever seen on a DVD. Bill Knell and Reality Films made very little effort to edit the source interview or even add new material. If you are a paranormal or conspiracy theory enthusiast, I'm confident that any other Philadelphia Experiment documentary out there is much better than this one. If for some unfortunate reason there aren't any better ones, you've just discovered what's called a niche market. Grab a webcam, buy some cheap video editing software and simply make your own. You'll undoubtedly produce much a better documentary and possibly earn a few bucks on the side. As for this DVD, I suffered through three-and-a-half hours of this so that you won't have to. Skip it.