John Lennon was one of rock's biggest revolutionaries as a Beatle and, later, as a solo artist. At a relatively young age and in a remarkably short amount of time, John Lennon and Paul McCartney combined to write a slew of hits that are still wildly popular to this day. John Lennon: Rare and Unseen aims to give more insight into the controversial rocker by presenting interviews and film clips that the casual Beatles fan likely has not seen.

John Lennon: Rare and Unseen is a compilation of interviews, show appearances, publicity stunts, and other video clips. The clips are presented in a very loose chronological order. That is, it begins with early Beatles interviews and makes its way through John Lennon's career as a Beatle, meeting Yoko Ono, his "Give Peace a Chance" days, and then his solo career. However, the documentary only vaguely adheres to that order as it bounces wildly back and forth between years and subjects, but generally, it moves forward in time. 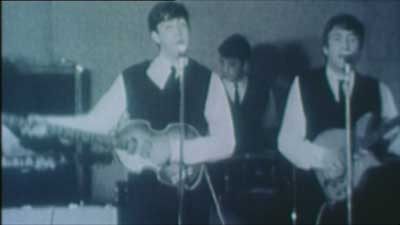 The documentary begins with a foreshadowing montage of clips that will be shown throughout the show and then jumps back to an interview with Colin Hanton, one of the Quarrymen (the group that would later evolve into the Beatles). It then shows an interview where John Lennon talks about the stresses involved with making Hard Day's Night, then Phil Collins discussing Sgt. Pepper's Lonely Hearts Club Band, and then back again to the 1966 concert tour in Memphis. One not so "rare and unseen" interview is John Lennon attempting to diffuse his infamous statement in 1966 about the Beatles being more popular than Jesus. The next clip has the Beatles discussing the legitimate fear that John Lennon would be shot at the Memphis tour-stop, a concert held at a time when Christians were protesting them and burning albums. 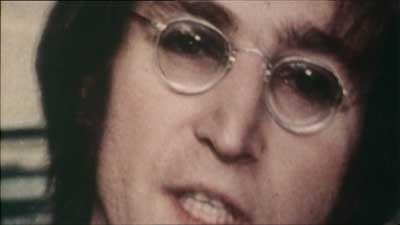 Other clips include John Lennon and Yoko Ono's staying in bed stunt, John Lennon talking about his anti-violence stance, elaborating on the Beatles move away from their mop-top days, and discussing the possibility of a charity concert in which the proceeds would cover bail for those who could not afford it. One of the few clips that I had actually never seen before was an interview with John and Yoko on a talk show discussing what makes art. This amusing clip has John Lennon asking volunteers from the audience to come up and hammer a nail into a chalkboard; after which, the host the asks the volunteers how it made them feel.

Overall, the clips are interesting, chosen well, and cover John Lennon's full career as a musician and his politics. The lack of narration and the paucity of modern interviews reflecting on John Lennon's life make this documentary feel, at times, merely like a jumble of John Lennon interviews cobbled together with little context. Some of the recent interviews that are included add little to the compilation. Do we really care that Phil Collins thinks he might not have liked John Lennon had he known him? Other interviews, however, do a good job at providing insight into John Lennon's life and personality. 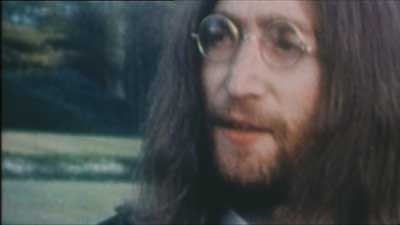 A minor, but understandable, disappointment is the documentary's notable lack of any Beatles or John Lennon solo music. Lennon is a fascinating subject and his strong political beliefs, controversial statements, and publicity stunts provide plenty of material for a documentary. However, any excuse to play the Beatles' and Lennon's classics is a good one and the silence can be deafening when it comes to the lack of music.

One thing this DVD does very well is show good clips with John Lennon and Yoko Ono together in their interviews. John and Yoko were soul mates in every sense of the word. Their adoration for each other is apparent when they appear together on screen. Yoko Ono may have been one underlying cause for ultimate breakup of the Beatles, but John Lennon was completely smitten with her and watching them play off one another makes for great television. John Lennon's story about how they first met at an art show and how she changed his preconceived notions of art is sweet. I have read this story before in a biography, but to see and hear John Lennon actually tell it brings a whole new perspective to their relationship. 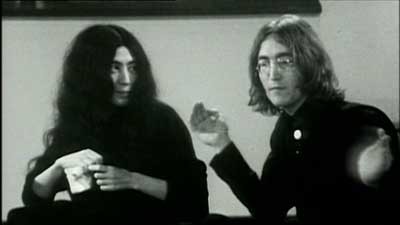 Sound: The vast majority of this documentary features John Lennon discussing various subjects. The sound is presented in 2.0 Dolby Digital and the quality varies greatly between clips. Sometimes the sound is clear and good quality and then the very next clip is quiet, muddled, and difficult to make out. There is a second or two of very loud static at the 00:01:06 mark for no apparent reason.

Video: The video is presented in 1.78:1 anamorphic widescreen. As with the sound, the video quality is variable depending on the source material. There are old film clips with a ton of dust and scratches and more modern interviews that look pretty clean. Overall, it looks like not much effort, if any, was made to clean up the source material for this release.

Final Thoughts: Perhaps I am just absurd in my Beatles/John Lennon worship, but I have seen many of these "Rare and Unseen" videos before in other documentaries. There were, however, a few clips that I haven't seen and they were fascinating. The lack of Beatles or John Lennon solo music is disappointing and the videos are presented in only a vaguely coherent order. John Lennon: Rare and Unseen is a decent compilation of film clips, but there are more organized and narrated John Lennon documentaries available that give a better portrait of his life. If you're a Beatles or John Lennon fanatic, and there are a lot of you, then this DVD is certainly worth a look. However, if you are that hardcore, then you have probably seen much of this material before. Rent It. 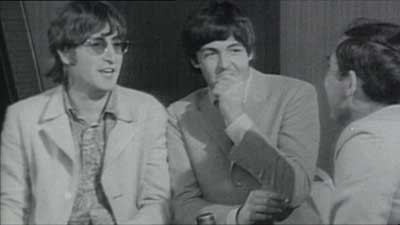