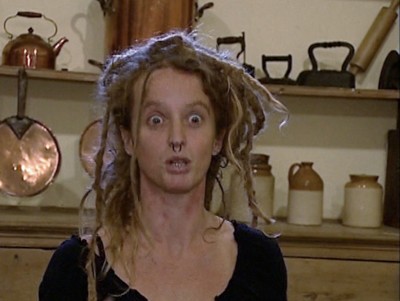 Ghosts, agent up, since there seems no end to reality programs eager to get you on camera. Seriously, there's probably a lot of money to be made out there. Ghost Hunters from the SyFy Channel has branched out, creating an international unit seemingly dedicated to finding mostly European and UK specters, at least in this first Season One collection. Don't rule out other parts of the world, GHI, but bring along some good translators. Or, maybe not, since the repetitive nature of these shows - and their dearth of real evidence, other than Orb photographs and Electronic Voice Phenomena - eventually results in fewer chills and more phantom fatigue than you can imagine.

The GHI crew plies its trade with an emphasis on debunking spooky happenings, while the show itself looks to create interesting personalities and interactions. These things add a bit of scientific and humanistic interest to otherwise standard proceedings, but are they enough to make Ghost Hunters International float eerily above the pack? We sure hope so, since some of these supposedly haunted locations have already been covered on other shows. Real-life paranormal investigators Robb Demarest, Dustin Pari, Barry Fitzgerald and Brandy Green form the core of the group, traveling to various spooky locations, castles, manors and citadels for instance, but forgoing any sightseeing in order to set up their gear and spend a tense night gathering evidence. It's stuff anyone relatively familiar with this genre of TV will be well aware of. The investigators often take the short route to solving mysteries; hearing eerie footsteps, they quickly find a loose window banging in the wind, or responding to reports of shadowy presences, they note the numerous life-size mannequins of tortured corpses standing about (certainly an easy solution, there).

Of course our investigators are as eager to find real evidence as they are to eliminate the spurious, so they're armed with the usual cameras, recorders and EMF meters, which they deploy in purported hot spots of activity. They also go in for a little shock and awe, questioning, taunting and challenging spiritual presences. And if that doesn't work, they're not averse to simply running through locations hollering and banging on things to rouse any sleepy ghosts. With the sun rising, the team packs up to examine its findings in a nearby hotel. They analyze, discuss the findings, and then present them to a representative from the haunted location. It gets a bit repetitive as they listen to or look at evidence about three times each over the course of ten minutes. After all, how many times can you listen to a scratchy recording that seems to say the name 'Toby' before you long for a good old-fashioned splatter of ectoplasm to the face?

Actually, GHI seems intent on canceling itself. Debunking efforts are valid and sensible, but tend to cut down on the chill factor. Meanwhile, offhand comments such as, "[this place seems] a whole lot different at night" really give up the ghost. Could it be possible that after dark, when our eyesight is at its weakest, our hearing is heightened, and our imagination is running wild, that we might be prone to misinterpret the information we receive, especially in a location that we think is haunted? Or have tortured spiritual energies decided to hang around for centuries to the benefit of thrill-seeking tourists?

I'd love to see a ghost, to have concrete proof, and shows such as Ghost Hunters International really have me chomping at the bit to spend a night alone in a haunted location. There's nothing quite as exhilarating as feeling the unhealthy rush of the uncanny, and it's an experience you want to talk about. However, the watered-down, second-hand chills of GHI, especially when served with healthy doses of common sense, repetitive programming, and too-average helming personalities, act a little to effectively to demystify ghost hunting for my tastes.

The 11 44-minute episodes included on this three-disc set sometimes include trips to more than one haunted location, but are as follows:
Chillingham Castle
Evil Unearthed
Whispers from Beyond
Haunted Village
Fortress of Fear
Headless Haunting
Frankenstein's Castle
Larnach Castle
Devil Dog
Castle of the Damned
Shattered Spirit

Video:
1.33:1 ratio images are substandard, though they do preserve the OAR of this show. Aliasing, some motion-blur, plenty of digital grain (mosquito noise) and occasional wavering due to heavy digital noise reduction are all problems apparent on this set. Colors are television-naturalistic, and when the night-vision cameras are broken out, greenish dark areas are fairly deep. In all, cramming three hours of material on each disc shouldn't result in quality this unimpressive.

Sound:
Dolby Digital Stereo Audio is mixed well, ensuring dialog - even whispers and those ubiquitous examples of EVP - is clearly audible (oddly, many of the bumps and bangs crew members mention are not audible, but that's another story). Also, there is enough separation in the stereo mix to give a spooky, startling vibe to some of the mysterious sounds that crop up.

Extras:
Arriving in a double-thick keepcase, this three-disc collection continues to defy logic. Not only is the cover art designed without much style, but also, the case is way too thick for just three discs. Worse still, those discs are stacked on top of each other on an easily broken spindle, and fastened in place by a strange plastic disc. Over an hour of Deleted/Extended Scenes is the sole extra on hand. Each bit includes additional creepitude for your pleasure, but since they're mostly pretty short they feel stranded without the context of the episode to bolster them.

Final Thoughts:
Poor packaging, poor fidelity, a split-season release schedule and few extras are just some of the scary aspects of Ghost Hunters International. These detractions are just part of the package, of course, a package which also includes just more of the same for seasoned Reality Ghost TV fans. Tons of EVP evidence, eerie stories, constantly dieing camera batteries and unsettling night-vision footage produce the usual results; occasional conclusions of possible hauntings, but nothing skeptics would say constitutes actual proof. The repetitive nature of evidence analysis and presentations to castle owners, delivered by relatively bland TV personalities means this show - despite its focus on debunking and scientific methods - delivers a low scares-to-minutes ratio for viewers. It's creepy, but not that creepy, meriting a mere Rent It for hardcore ghost fanatics.