LeapFrog: Math Adventure to the Moon 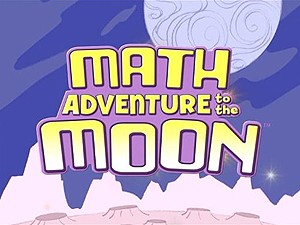 
The Story So Far...
Leap Frog has built an impressive empire of educational toy offerings, adding fun to learning via various handheld and laptop units, and have expanded to include non-interactive material, using the characters from its traditional products in DVDs. A series of titles were released starting in 2003, and new titles and reissues began in 2009. DVDTalk has reviews of several titles.

The Show
This latest entry in the Leap Frog video series tackles a new topic, visiting the world of math, via a journey to outer space. Tad and his twin sister Lily need to bring in a collection of 10 things for show and tell, but they can't count them out. So along comes Edison the magic lightning bug (think the Great Gazoo) who will teach them about math by taking them on a trip on a space shuttle. There have to be easier ways to learn to count to 10.

Along the way, Edison teaches the kids how math is in almost everything around you, most specifically through the song "Math is Everywhere." It's a pretty common thing to wonder when any of the math you learn in school will come in handy, but these basics are part of most elements of everyday life. The introductions to counting, numbers and patterns are naturally integrated into the story, with things like the countdown for their shuttle and the distance between planets, so it doesn't seem entirely "preachy" about the lessons. 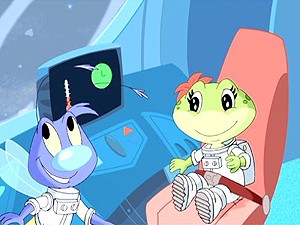 The lessons are mainly done via songs, which makes them more accessible, and increases the likelihood that kids will want to revisit them. There are also applications of math skills, like the finale where Tad and Lily need to fill fuel tubes with crystals and need to use addition to figure out how many they need. The only portion I didn't quite "get" was the sorting lesson, as the sorting was based on size, color or shape, and didn't seem like a math skill (though a quick search of math lesson plans online confirmed it.) I still don't think separating by color has anything to do with math.

As my daughter has now watched math lessons with rapt interest, obviously this DVD has positive value, but the disc's content runs just over a half-hour, and only reaches that length after padding things out with a repeat the song "The Learning Path," from previous releases, with the same animation as before. Admittedly, most educational DVDs out there seem shorter than the entertainment releases, but 30 minutes feels excessively short. 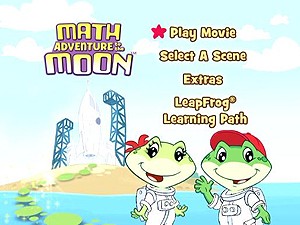 The DVD
A one-disc release packaged in the now-standard Leap Frog green, single-width keepcase, the DVD features an animated full-frame menu, with options to watch the show, select scenes and check out the extras. There are no audio options, no subtitles and no closed captioning.

The Quality
The full-frame animation is solid as usual, with kid-friendly vivid colors and a crisp, well-animated image, free of any dirt, damage or digital artifacts.

The Dolby Digital 2.0 track delivers a standard center-focused presentation, like any other kids show, with clean, distortion-free dialogue and solid music.

The Extras
Things get started with a simplistic sorting game, where you are given a colored shape and three groups to choose to place it into. Obviously, pretty easy, but it ties in with the disc has a decent amount of chances to play, and might be fun to a little one. It's followed by four sing-along songs, with karaoke-style on-screen lyrics. My daughter loves to follow songs this way, so this was a hit, though the words in the song may be too complex for sing-along for this age group.

Also included on this disc are a handful of promos for other Leap Frog and Lionsgate products, including a song from the Let's Go to School, a commercial for Leap Frog's Learning Path online system and some trailers. 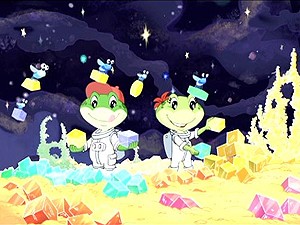 The Bottom Line
It was about time math got some attention in the Leap Frog library, and though short in terms of content, this DVD offers some solid basics in math. The disc looks and sounds very nice, as usual, and though there are a few extras, they aren't the most impressive. If you've enjoyed the previous entries though, you'll want to check this DVD out, and it's not a bad place to start if you haven't check it out before.