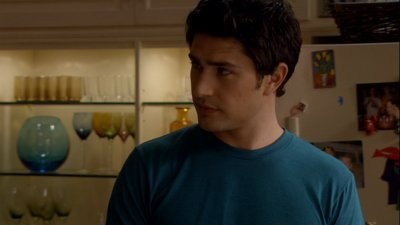 Prior to this review, I had never seen a single episode of Kyle XY. When I first heard about the series, it never sparked my interest. After diving into the show's last ten episodes, I had a little trouble adjusting to it. Of course, not having watched the first two seasons, I was a little lost about who the characters were and what was happening. After the first couple of episodes, I got a pretty good handle on things. However, as I watched season three, it never really grew on me. Perhaps if I had watched the show from the start, my impressions might have been different. Nevertheless, I did not think very highly of Kyle XY. I did not feel the characters or the plotlines were strongly engaging or entertaining enough to warrant recommending this DVD release.

The third season of Kyle XY picks up where season two left off. There is a quick summary of the events from the season two cliffhanger. Kyle and Amanda were getting ready to go to the after-prom party. Unfortunately, she was abducted and Kyle too. Meanwhile, Jessi and Sarah were preparing to leave town. As season three begins, Kyle awakens in an examination room and escapes. He rushes against the clock to save Amanda. At the same time, Jessi senses he is in trouble and leaves Sarah to help him. The episode concludes with Kyle and Jessi learning that Latnok was behind the abductions. They did it to recruit Kyle into their organization. This event leads to the introduction of Cassidy. He is a face of Latnok and has been recruiting and funding college students on different research projects.

As the season continues, Cassidy and Latnok become a major plotline. Kyle wants to understand their intentions and why they want to recruit him. At the surface, Latnok's intentions are benign and appear to be genuine. Of course, they aren't what they seem and it isn't until the end of the series that the truth really comes out. At the same time, Kyle and Amanda break-up. They realize after the kidnapping that there is something wrong with their relationship. Matters are complicated further when Sarah goes missing and Jessi moves into the Trager's house. Her romantic interests in Kyle are eventually made known to everyone.

In addition, there is plenty of other romantic dramatic on the horizon. The cast deals with their own romantic complications and ventures. Lori's recent breakup with Declan turns sour when she finds him kissing her best friend. She also develops a romantic relationship with Mark, who turns out to have ties to Latnok and someone her dad forbids her to date. Josh and Andy have their ups and downs. They take their relationship to the next level by having sex. Later, he learns she is moving out of state. Amanda also tries to move on, which Kyle doesn't handle too well. She dates Latnok goon Nate and it makes for a lot of tension/drama.

Overall, Kyle XY had a lot of things going on for its cast. The majority of the drama came from its cast and their romantic interests/relationships. In addition, there was a big storyline about Kyle, Jessi, and Latnok. This plotline was the major focus of the season (and the series from what I can tell) and there are a lot of details revealed about it. However, the season ends with a cliffhanger (potential developments/storylines are discussed in a special feature). Personally, I did not think the season three content offered a whole lot for viewers. The typical issues Kyle and company dealt with were nothing extreme. The Latnok mystery never got really big and sometimes felt too childish. Perhaps it was a bad after taste from all of the teenage angst/drama pouring out of the characters, but the main story arc never drew my attention and simply felt immature and underdeveloped. Nevertheless, I did not care much for Kyle XY and unlike some shows that were prematurely canceled, I don't feel this series was one of them. In the end, you won't be missing out on much if you never watch a single episode of Kyle XY. 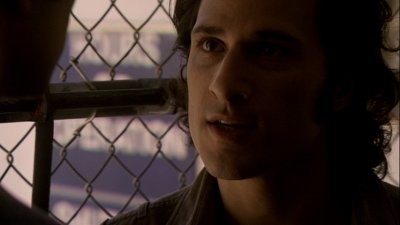 
Video:
The video in this release is given in anamorphic 1.78:1 ratio widescreen color. The picture quality is generally good with detail looking sharp and no issues with colors. However it does have a slight grain, which is more noticeable during darker scenes. There are also some minor traces of edge enhancement.

Audio:
The audio in this release is given in English 5.1 Dolby digital surround sound. Overall, the sound quality is very good, providing an audible and clean audio track. The majority of activity is in the forward channels, but there is decent use of the surround sound capability. Music and sound effects sound very rich and vibrant. There are subtitles in English, French, and Spanish.

Final Thoughts:
This review of Kyle XY: The Complete Third Season was my first experience with the show. While I had a rocky start, I think I picked up pretty well on the characters and what was happening. However, I did not think the show was very strong. There were some decent plotlines/developments, but the season as a whole felt weak. The sci-fi aspect had some intrigue, but it did not deliver with the Latnok story arc. I think the over abundance of teenage angst/melodrama made it hard to really take the characters seriously and get into it. In the end, I think this DVD set is best reserved for the fans who have watched and enjoyed the show's first two seasons. For everyone else, I don't think you're missing out on much if you never watch the show.