Lupin the 3rd is a classic anime franchise that has been in existence in one form or another since the 1960's. Lupin has touched on almost every form of media out there: manga, television, movies, CD's, DVD's--everything! While popular among anime fans, Lupin never achieved mainstream success in America; after watching First Contact, I wonder why that is. This show is a lot of fun; even viewers who dislike anime would find Lupin entertaining. As a huge anime fan myself, I'm almost ashamed to admit that I have only seen one other show featuring Lupin, that being Hayao Miyazaki's, Castle of Cagliostro. Upon watching the disc, I suddenly feel deprived and am clamoring for more Lupin.

Lupin the 3rd Episode 0: First Contact initially aired as a TV special in Japan in 2002. It's an origin story of sorts that explains how all the major characters in the series first met. The story begins in a bar. Jigen, Lupin's right-hand man, meets a reporter who is interested in writing a book called First Contact about how Lupin's gang came together. Jigen agrees to tell the writer his version of the story. 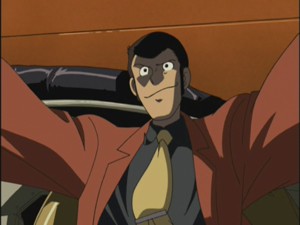 Jigen's story begins with a blond female burglar breaking into the Galvez mansion during a party. The thief tricks the Galvez, a crime boss, into taking her to his bedroom for a little action. Lo and behold, the thief turns out to be none other than Lupin himself. The Boss' bodyguard, Jigen, the "Fastest Gun in the Underworld," stops Lupin from stealing Galvez's treasure and chases him away.

The rest of the First Contact follows Lupin's adventure to take Galvez's prized treasure--the Clam of Hermes--while everyone else tries to stop him or take the treasure for themselves. The Clam of Hermes contains a scroll that describes how to produce a metal stronger than diamonds. Naturally, the container itself is made of this impenetrable metal and can only be opened with a very special key. 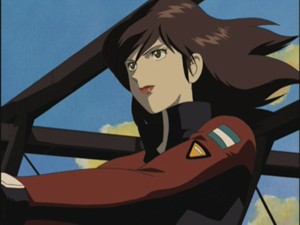 In this tale, as Jigen relays it to the writer, Lupin meets the future members of his gang as well as other characters from the Lupin the 3rd franchise including Jigen, Fujiko, Goemon, and his arch-nemesis Inspector Zenigata. Jigen also explains certain elements such as how Goemon got his sword, Zantetsuken, which apparently can slice through cars like a hot knife through butter.

Outside of Lupin, the character I found most interesting was Inspector Zenigata. He is portrayed as something of an idiot who really isn't respected by the law enforcement community. Yet, he seems to be the only officer who is ever on the right track when it comes to unraveling Lupin's latest scheme. Whereas the other officers and investigators are completely at a loss, Zenigata is usually pretty close with his theories and hunches. Several times he is right on the verge of making the bust before Lupin finds a way to squirm out of his grasp. I have read that in the manga Zenigata is a much more formidable adversary than he is portrayed in the anime series. That's a shame. I think First Contact is a good fun story, but it would have further benefited if Zenigata was portrayed as a great investigator from Japan whose services are required in order to capture Lupin. It would come across as a more lighthearted Death Note with Lupin and Zenigata attempting to one-up each other. 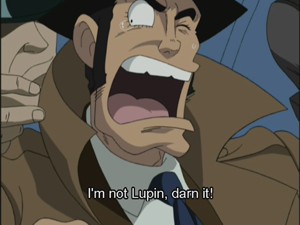 Lupin the 3rd Episode 0: First Contact is an action-packed adventure from start to finish. The plot thickens throughout the show with constant twists, turns, disguises, and double-crosses. This DVD serves as a great diving-in point for new Lupin fans. All of the characters are properly introduced and given enough screen time for viewers to become familiar with their personalities. The nuances and character relationships are also quickly established such as Fujiko flirting with Lupin's and acting as both his ally and foe. I'm guessing that the disguise trick is a hallmark of this series since it is often used in Lupin's heists.

Sound: The only track included on this DVD is in Japanese 2.0. For stereo sound the track is excellent; the voices and sound effects are good and clear. All of the Japanese voice actors sound great, but as a dub fan, I wish that an English language track would have been included.

Video: This television special initially aired in 2002 and is presented in 4:3 full frame. The video quality is quite good considering it's full frame and was originally made for television. The image is pretty clear and I noticed no compression artifacts. The art has a cool vintage look; however several of the scenes were a bit too dark.

Extras: The extras include trailers, character sketches, and a commentary by Nelson Reed who runs a Lupin the 3rd fansite. The character sketches are interesting and there is even a little fan service for all the Fujiko fans out there. Nelson Reed's commentary is very informative and actually quite interesting. He provides extensive background on the show and leaves very little dead air. The best commentaries are where the person loves the material and is genuinely excited by it or where the person somewhat dislikes the movie and is snarky (see Tom Clancy's commentary on Sum of All Fears). There's no doubt where Nelson Reed lies on that scale--he loves the Lupin franchise and seems absolutely thrilled to be a part of the DVD. More DVD's, especially anime DVD's which are often lacking in extras, should include superfan commentary tracks such as this one.

Final Thoughts: Lupin the 3rd Episode 0: First Contact serves as a prequel for the all the adventures of Lupin and his band of thieves that have been released over the last 40 years. Action fans will find plenty to love with all the gunfights and car chases. This is a great story full of twists and turns with bits of comedy scattered throughout. Even non-anime fans will find this DVD enjoyable if they can get past reading subtitles. This Lupin television special could easily be turned into a live-action summer blockbuster film that I suspect would do very well at the box office. If you haven't had the chance to catch any of the Lupin TV shows, movies, or OVA's, this is the perfect starting place. Highly Recommended. 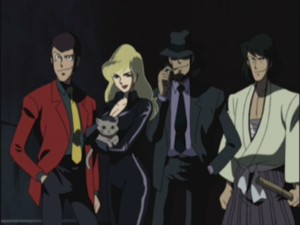