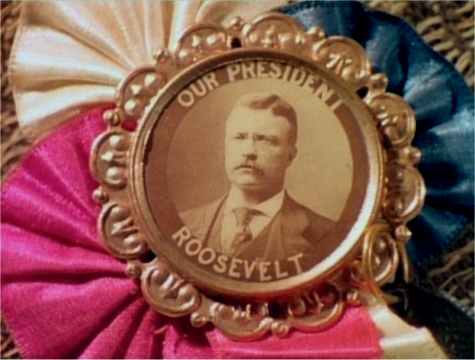 Theodore "Teddy" Roosevelt was the 26th President of the United States and arguably one of the most popular. Born in 1858, Roosevelt grew up in a wealthy family and suffered from asthma at an early age; in contrast to his weak physical condition, young Teddy devoted his childhood to books and learning, particularly on the subject of nature. His strength in school led him to Harvard, during which time he also improved his physique by participating in boxing and other physical activities. Roosevelt also enjoyed writing and finished his first of 18 books at the age of 24; around the same time, his budding political career grew after he became a State Assemblyman. During the same decade, his first marriage ended abruptly after his wife, Alice, died of kidney failure...and to make matters worse, his mother died of typhoid fever on the same day in the same house. After spending several years in North Dakota as a cowboy and deputy sheriff, Roosevelt remarried and returned to politics as a member of the U.S. Civil Service Commission. Less than ten years later, he was elected president of the board of New York City Police Commissioners, though he left to spend several years in the military (where he formed the First U.S. Volunteer Cavalry Regiment, AKA "The Rough Riders").

Following his time in the military, Roosevelt returned to New York in 1898 and successfully ran for Governor; three years later, he would be elected Vice President of the United States. That same year, President William McKinley was assassinated and Roosevelt succeeded him as President, where he enjoyed two terms as a highly successful and influential leader. As the youngest President in our nation's history, Roosevelt's charisma and strong presence were as highly regarded as his reformist policies and progressive stance. He gave members of the press a liberal amount of access to the White House for interviews and photo opportunities, while working tirelessly to narrow the gaps between labor and business (a policy that he famously nicknamed "The Square Deal") and devoting plenty of time to women's and civil rights. Due to his lifelong appreciation of nature, Roosevelt also created the United States Forest Service, which included 5 National Parks and 18 new National Monuments. After the end of his second term, Roosevelt formed a new political party, spoke for 90 minutes after being shot in the chest and spent a year in the wilderness of South America.

He died of a heart attack in January of 1919, leaving behind six children and his second wife.

Researched, filmed and produced during the better part of a decade, Harrison Engle's The Indomitable Teddy Roosevelt (1986) pays tribute to the popular President by touching upon many of these accomplishments in moderate detail. Roosevelt was the first American President to stand in front of a movie camera, so it's no wonder that a great deal of silent footage was available to help tell the story. Most of this footage is strictly promotional rather than candid; more often than not, T.R. stands heroically in front of massive, swooning crowds...and as amazing as that is to see, it can't fill in all the blanks. During production, Engle made the choice to supplement this footage with careful reenactments; this was a controversial and relatively new concept at the time, but it certainly proved to be a sound decision. Bob Boyd's portrayal of Roosevelt is fine casting, even if it sounds strange to hear vocals during these silent film-era scenes---and in some cases, actual descendants of T.R. are used to portray their late relatives (for example, Theodore Roosevelt V plays his great-granduncle, Quentin). Though first-time viewers may be distracted at first, the juxtaposition of historical footage and modern reenactments becomes almost seamless as the story unfolds. 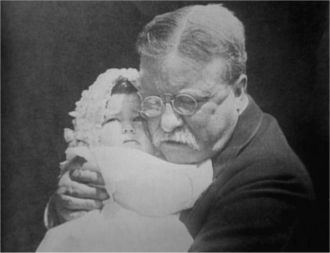 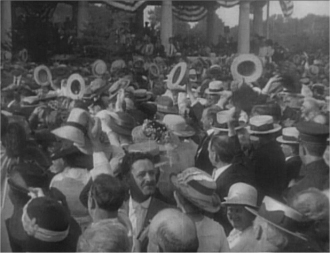 What's slightly more distracting---even during the tenth viewing---is the film's soundtrack, which features music by famed composer/conductor John Philip Sousa. While this upbeat, patriotic score attempts to keep the mood energetic and lively from start to finish, it becomes a little tiresome after 96 minutes. This could be due to the audio mix; more often than not, the music is a little louder than it needs to be and occasionally fights with George C. Scott's narration. Elsewhere on this release, a number of text-based bonus features include more Sousa music---and if you've ever tried reading a book during a parade, it's next to impossible. Had the music been dialed down a notch or two, The Indomitable Teddy Roosevelt might be a little easier to pay attention to at times. This is a fascinating portrait of an influential man, but it's a little rough on the ears.

Presented by Infinity Entertainment, The Indomitable Teddy Roosevelt finally made its DVD debut last month; aside from initial showings on three different networks (where it earned a prime-time Emmy nomination), this documentary was previously only available as a 1999 VHS release. Unfortunately, this 3-Disc Collector's Edition talks softly but doesn't carry a big stick: the technical presentation is barely passable and the bonus features are substantially thinner than expected...but in more ways than one, it's still a worthwhile release that history buffs will enjoy. Let's take a closer look, shall we?

Presented in its original TV-friendly 1.33:1 aspect ratio, The Indomitable Teddy Roosevelt looks passable under the circumstances. There's obviously a mixture of footage on display here: some of the dramatic event recreations are consistently soft, but older footage varies in quality...and, in some cases, actually looks quite impressive. On the digital front, the visuals suffer from interlacing and mild compression issues; the latter issue is surprising, since there isn't a great deal of content here. It's undoubtedly a step up from the 1999 Special Edition VHS release, but fans still shouldn't set their expectations too high.

The Dolby Digital Chace Surround Stereo mix is also low-key but still has its moments. Separation is notable and George C. Scott's narration comes through clearly, though it occasionally fights for attention with the film's patriotic score; in short, this is about as good as the source material will allow. Overall, it's a passable treatment that fits the bill for home and classroom screenings alike. Unfortunately, no optional subtitles or Closed Captions are offered during the main feature or extras.

Seen below, the plain-wrap menu designs are simple and easy to navigate. The 93-minute main feature has been divided into a generous 22 chapters, while no obvious layer change was detected during playback. This three-disc release is housed in a multi-hubbed single keepcase and includes no printed inserts of any kind (more on that later). 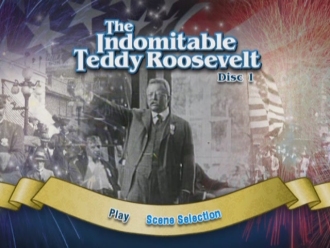 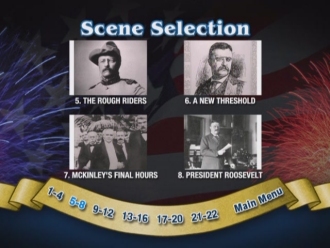 Bonus Features
Multi-disc Collector's Editions are generally packed with supplements, but The Indomitable Teddy Roosevelt is substantially thinner than excpected. Disc 2 leads off with an engaging Harrison Engle Interview (14:04, anamorphic 1.78:1 widescreen), during which the director goes into modest detail about the documentary's inceptions, production and lasting influence. Most of the remaining Disc 2 extras (which include "Teddyisms" (famous quotes), a Photo Gallery, a Sousa Biography, a Soundtrack CD Track Listing and a Transcript of Roosevelt's 1905 inaugural address) are text-based and could easily have fit on Disc 1. It goes without saying, but a printed booklet would have been a much more efficient and user-friendly format for most of these features, especially the CD track listing. Engle's interview, like the main feature, does not include optional captions or subtitles.

Disc 3 is a Soundtrack CD entitled "Sophisticated Sousa" (31 tracks, 63:26 total) featuring a generous portion of marches and operettas written by John Philip Sousa. Many of Sousa's most famous works are here, including "Semper Fidelis", "El Capitan", "Washington Post March", "Glory of the Yankee Navy", "Stars & Stripes Forever", "Battle Hymn of the Republic", "Hail to the Chief", "Sabre & Spurs" and more. The sound quality is acceptable, save for a few stray clicks and pops during a handful of tracks; it's unknown whether this is a source material or production issue, but these imperfections aren't too distracting.

The Indomitable Teddy Roosevelt is a celebrated documentary about one of America's best-loved Presidents---and though it runs a bit short at 93 minutes, it's loaded with historical footage and respectful reenactments. From T.R.'s early years through his untimely 1919 death, many of his greatest accomplishments are covered in modest detail. This Collector's Edition from Image is thinner than advertised, spreading only two hours of total content onto the first two DVDs---and the bonus CD is a nice touch, but hardly a key selling point. In any case, The Indomitable Teddy Roosevelt boasts a strong main feature at a relatively low price point (for the number of discs, at least), so history buffs should undoubtedly take notice. Recommended.