There's a lot about most new or recent music that I'm not a huge fan of, though I have started to slowly dip my toe into the deep end of that pool, and have discovered the British trio who call themselves Muse. I'm not a full-blown fan yet, though for new fans like me, Under Review provides a wealth of information about the band. Lo and behold, they were formed in 1994?!?!

That's just the tip of the iceberg. Alas like many other musical biographies before it, Under Review seems to fall into the traditional unauthorized version of the story, featuring interviews with those who have worked with Matthew Bellamy, Christopher Wolstenholme and Dominic Howard in the past. These include collaborators and former producers. They talk about the individual members' increasing interest in other music and the band's growth through the years. There are music critics who share their thoughts on the bands albums during their tenure and provide an historical tidbit here and there. 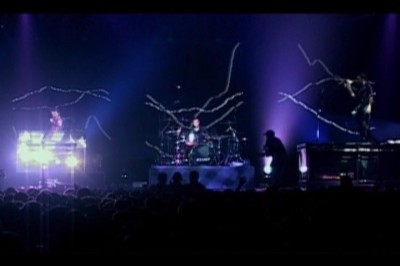 Yet for all this information, there is little in the way of band participation, aside from an archival clip here and there. It's only fair, since this unauthorized biography is "An Independent Critical Analysis" of the group as it's titled on the front of the disc artwork. For those who want more out of their Muse, this may be undesirable, but to this novice I didn't see a problem with it. It was reminiscent of a VH-1 documentary from several years ago, examining what the band was doing and how they were doing it, without the nuisance of the band sharing their thoughts. It felt better on this disc, because for one, I could look at how Muse formed and got their start, and their difficulties at stardom in their native England.

They started in humble beginnings before winning a Battle of the Bands contest in England, smashing their equipment in the process. Moreover, while they didn't become a more recognizable name in England until their second EP garnered moderate popular success, they struck gold by going to America for two promotional tours, and returned with an American record label deal, signed on Christmas Eve 1998. Their debut album, 1999's "Showbiz," did fairly well across Europe and even was certified Gold in the UK, but their second album "Origin of Symmetry" was released with far greater reception and praise, getting platinum certification and reaching as high as third on the UK Album sales charts. It was the last time a Muse album would finish so low, as the last three albums ("Absolution," "Black Holes and Revelations" and "The Resistance") have all topped the UK charts, achieving platinum status and gaining increased North American presence. Their eclectic mix of progressive-rock, indie, classic and arena rock (among several varieties) make it interesting to listen to from a fan's perspective. They bring out some of these flavors on tour as well, which prove to be memorable for those who attend.

Ultimately, Under Review would be an appropriate title for this piece on what is a steadily improving musical group. It's clear that the best is yet to come for them and while this biography is good, Lord knows there could be better ones done on the boys, whether they want to "Take a Bow" or not.


Full frame video. There are a couple of moments where there appears to be edge enhancement in the old concert tapes, but this is average without any distractions.


Two-channel Dolby stereo, and it's not exactly a mind-blower. Its more interviews than well-mastered or good sounding music, so...the interviews sound nice.


Biographies for the contributors of the disc are included, along with "Capturing the Muse" (9:00), which examines the look and style from a crew perspective that the band wants to accomplish in a music video (in this case, "Hysteria").


Under Review doesn't bring a lot of meat to the table if you're a die-hard Muse fan, but for those of us jumping into the group for the first time, it does serve as a jumping off point, however incomplete it may be. Definitely worth checking out for those of us like me.