Warner Bros. // Unrated // September 14, 2010
List Price: $59.98 [Buy now and save at Amazon]
Review by Nick Hartel | posted October 8, 2010 | E-mail the Author
THE PROGRAM
AUTHOR'S NOTE: This review will assume you've seen season one of "Fringe" and feature many spoilers as a result. If you haven't seen the premiere season, do yourself a favor, check it out first. Season two is nearly impossible to fully follow anyway, given the rich buildup of mythology and questions left needing answers.

To be perfectly honest, the hardest review a critic has to write is for something they love. Average movies or even, "pretty good" movies aren't usually a challenge. You hit the highs, mention some of the lows and you're done. An awful movie is always fun and almost always a breeze, but those movies or shows that are nearly perfect, really make it hard to express how much you love the end result, there's always something you don't get to mention that you want readers to know, but just can't squeeze in. So is the case for the second season of "Fringe." I loved the first season of the show, despite it's slow start, but once the mythology began to unfold and the season finale left me with a bunch of questions and wanting to know the answers immediately, I knew I was with the show for the long haul. However, as a "LOST" fan and knowing "Fringe" has connections to "LOST" creative associates, I began to fear my answers would be more questions. The truth, in short form, "Fringe" gives you the answers you want and new questions you'll love to ponder.


When we last left our heroine of season one, Agent Olivia Dunham (Anna Torv), she had traveled across universes to an alternate reality to meet with the mysterious founder of Massive Dynamic, William Bell (Leonard Nimoy). Dunham's work in the Fringe division of the FBI had put her in close contact with Bell's old lab partner and now (literally) mad scientist, Walter Bishop (John Noble) and his son, the equally genius but quite sane, Peter (Joshua Jackson). Just as viewers had received answers regarding a strange series of paranormal events known as "The Pattern," they were left over the summer to now wonder about this parallel universe, how Peter fit into things given the revelation of his tombstone suggesting he died as a boy, and how Olivia would find her way back to her own reality.


Season two starts with Walter and Peter investigating a car crash involving Olivia's car, but Olivia is nowhere to be found. However, this is "Fringe," and this is no missing persons case, instead Olivia comes crashing out the window of the car, appearing mysteriously from nowhere. Unable to remember what Bell told her, amnesia is the least of her worries, instead shape shifting killers from the "other side" are on her trail in what kicks off a season of answers to old questions, new questions, answers to those questions, and even more new questions. Best of all, "Fringe" has firmly found it's footing and nearly every episode in this season is an A-level affair. The standalone episodes are still present, but even then, there are great moments of character development, especially when it comes to Peter and Walter's continued building of their relationship and the mystery of Peter's true nature. 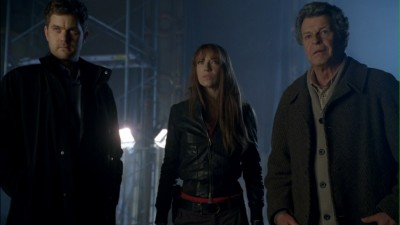 While season one focused on Olivia her coming to grips with the death of John Scott, the relationship of Peter and estranged father Walter, was always a present undertone. Wisely, the creators let Olivia take a bit of a backseat this season, allowing Walter and Peter to have some great character moments, and given the acting clinic John Noble is able to put on every episode, this is a very good thing. To say Noble has been slighted by the Emmys and Golden Globes is a criminal understatement. The man consistently balances insanity with genius and a touching humanity, it's quite a regular sight to see him discuss a horrific case and without any noticeable shift begin talking about recipes for taffy. On the same hand, he's able to dig deep and show the fragile remains of humanity when the story calls for it, proving Walter Bishop wasn't completely lost in the asylum he spent so many years in. The episodes "Snakehead" and "Peter" are definitive proof he should be walking away with the accolades, as both show the full gamut of Noble's skill, showing Bishop in the present frustrated that he can't get his brain to function "normally" well aware of his peculiar eccentricities. In "Peter" though, Noble is finally able to show us a Bishop before he was locked up and we get a full taste of the distinguished and brilliant man that pops up from time to time when the people around him need him most.


Likewise, Joshua Jackson, continues to impress, making his days on "Dawson's Creek" a distant memory. Peter is in many ways an equally complex character, but as he's sane, Jackson is able to keep many of the more emotional moments restrained, only leaving undertones for viewers to pick up on. His chemistry with Noble is very believable as is his connection to Torv, which becomes a key plot point as the season progresses. Torv, herself delivers a much more consistent performance than last year, having a full handle on her character, she's able to strike the balance between professional and personal quite well. Also worth noting are Lance Reddick as Olivia's boss, Broyles. Reddick is a much bigger player this season and even gets an episode of his own for some minor character development. Jasika Nicole as Astrid, Walter's assistant/nanny also becomes a permanent fixture of this odd team/family, providing an ear for both Walter and Peter in a number of situations to air their fears and concerns. 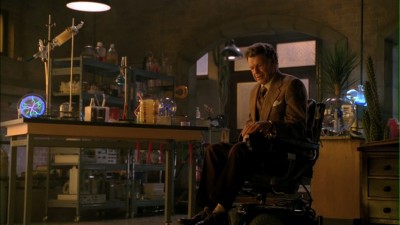 Story wise, "Fringe" is on fire, introducing a mystery through often seemingly unconnected events. The shape shifters are the major adversaries this season and while sadly, no one regular villain is as memorable as Jared Harris' "David Robert Jones" of season one, they are still menacing. The writers save the biggest surprises for the final three episodes, wisely waiting to answer some big questions while still managing pose some new ones. Fans of season one and of Leonard Nimoy, fear not, while William Bell does remain an enigma, Nimoy finally does get a couple of episodes as a major on-screen character and the result is magic. A charisma magnet, he's nearly perfect in every scene and knowing now this series is his acting swan song, it's nice to see an actor of his caliber end on a high note.


Only two episodes really failed to hold my interest, "Dream Logic" an early season episode that bridges the gap from the season opener to the Walter/Peter centric plot thread that reaches full steam with the episode "Peter" A later season episode "Olivia. In the Lab. With the Revolver" is quite dull, but serves as a necessary evil for season finale. Even though these episodes deliver minor weight to the driving storylines, they are at worst, B or B- quality; those fearing repeats of the previous seasons dullest points, don't worry, things are much smoother. ON the flipside, two of the season's best, non-mythology episodes are "White Tulip" featuring a riveting guest role from Peter Weller. It takes the somewhat tired method of the "déjà vu" episode and breathes new life into it, allowing for another great bit of acting from Noble. "Northwest Passage," the penultimate episode before the finale has some great Twin Peaks references and gives Joshua Jackson a chance to shine, as the episode focuses entirely around Peter and a local sheriff played by Martha Plimpton. 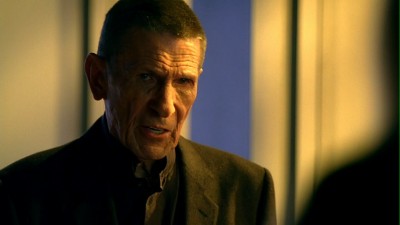 One episode I must address, is "Brown Betty" the bridge between the major set-up for the finale and the final three episodes. A completely standalone piece, it focuses on Walter telling Olivia's niece a story. Filmed as a film noir with musical elements and heavy sci-fi elements, I found it to be a fun diversion. Granted, I was watching these episodes on DVD and had instant access to the following episode, whereas first run viewers had to wait another week, but that doesn't make the episode bad. It's extremely well made and the writing captures a lot of important character threads and presents them nicely in an abstract story. If you hated it the first time because you wanted more mythology, give it a second chance, because it really is a fine episode.


In the end, "Fringe" has left me wanting a whole new set of answers and fortunately this time around, I'll be following the series on it's first run, abandoning "The Office" for a series that I initially thought could be a reasonable substitute for "LOST," but now I fully believe could surpass the series in coherent storytelling and gratification. "Fringe" is smart sci-fi, taking elements from its predecessors (mainly "The X-Files") but learning from their mistakes. It has loads of heart and soul, consistently solid production design (one of those things I knew I wouldn't have time to gush over), and smart writing.


The 1.78:1 anamorphic widescreen transfer is a notable improvement from last year's B-grade transfer. Detail can be stunning in many scenes, but again, outdoor scenes, especially under heavy lighting exhibit some inconsistent noise problems. There are times when the transfer does look soft, which can be distracting when close-ups look markedly different. Color levels are all solid, natural and consistent, while contrast is generally strong, an always-appreciated factor for a show that likes to use darkness for atmosphere. It's a step-up, but still not "LOST" or "Spartacus" level, the latter of which I still hold as one of the best looking shows in recent history.


The Dolby Digital 5.1 English audio track suffers the occasional under mixed dialogue. Directional effects are quite strong and some very subtle audio effects are much appreciated, the low hum of a fluorescent light in one scene really speaks for the sound design of the show. All in all, it's a solid, pleasing audio track that's not perfect, but far beyond the standards for many television programs; it easily holds it's own with the average feature film production. English, French, and Spanish subtitles are included.


The most common bonus feature is a short featurette relating to an individual episode titled "Analyzing the Scene." These featurettes pop up six assorted episodes throughout the set. Additionally, five episodes have a deleted scenes gallery.


The real meat of the bonuses are commentary tracks from the creative team (for the specific episode) on the episodes "Momentum Deferred," "Brown Betty," and "Over There Pt. 2" An additional commentary track for the episode "Peter" features John Noble and Blair Brown. The standard documentary feature, which is spoiler filled, titled "Beyond the Pattern," runs around thirty minutes. A short featurette with John Noble and the show's prop master makes for an interesting diversion as does a gag reel.


Last but not least, is the unearthed episode, aptly titled "Unearthed." Obviously cut from season one, it's your typical, early season one, filler episode. It's still a fun watch but neither adds nor detracts much from the series.

Surpassing the already great premiere season, "Fringe: The Complete Second Season" is a great DVD package. A show with all the right elements, firing on all the right cylinders, it's a must own series for lovers of great, non-gimmicky entertainment. Aside from an improved, but still imperfect transfer, this set has some great bonus features and 22 episodes that will continue to entertain on repeat viewings. DVD Talk Collector Series.