Full disclosure, although I've loved martial arts movies for nearly my entire life, I had seen (or didn't realize) any classic Shaw Brothers films until around seven years ago. A local film festival devoted an entire weekend to classic martial arts (and samurai) action, with rare 35mm presentations of "Shogun Assassin," "Master of the Flying Guillotine," "King Boxer," "Lady Snowblood," and the crown jewels of the weekend, newly remastered prints of the "The Eight Diagram Pole Fighter" and "The 36th Chamber of Shaolin." To say I was instantly hooked was an understatement. Unfortunately, the films were only available in the US on shady, full screen, English dubbed DVDs with a picture quality that made the movies look 20 years older than they actually were.


The only solid DVDs were from Celestial, the same company responsible for the 35mm prints I saw at the festival, but those discs were only available in China and alas, I didn't have a region free DVD player. Fortunately, the Weinstein Company licensed a handful of Shaw Brothers classics from Celestial and announced plans to release them under their Dragon Dynasty label. In 2007, "The 36th Chamber of Shaolin" saw release and most assumed "The Eight Diagram Pole Fighter" would follow. It didn't and for three years, many fans (including myself) assumed given the label's financial troubles, the title would never see the light of day. Fortunately, Dragon Dynasty has finally delivered the goods. 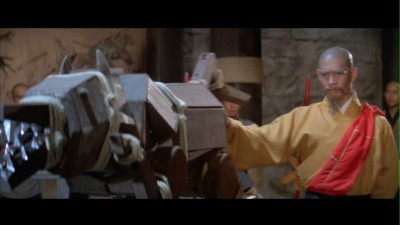 For those burned by Dragon Dynasty's tinkering with other titles such as "Police Story 3," fear not. Like all (at least to my knowledge), Celestial titles they have licensed, the films are in their original forms. For a film as great as "The Eight Diagram Pole Fighter," this means a real treat for fans and the uninitiated alike. While "The 36th Chamber of Shaolin" remains my all-time favorite martial arts film, this one comes a very close second, and if it weren't for a terrible tragedy, the outcome could have been very different.


While the film's star, the legendary Gordon Liu, already had some hits under his belt at the Shaw Brothers studio (including "The 36th Chamber of Shaolin" and its sequels), "The Eight Diagram Pole Fighter" was conceived to showcase Alexander Fu Sheng. Unfortunately, early in production Fu Sheng was killed in a car crash at the age of 28 and the film was retooled towards Liu. While Liu carried the film to masterpiece status, one can't help but wonder what the outcome would have been like had Fu Sheng not left us so early. 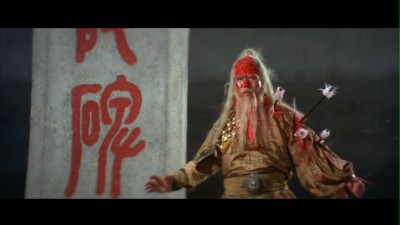 The basic gist of the story is quite simple. The Yang brothers, all referred to by number open the film with a fierce battle against a rival group. Hopelessly outnumbered, they are nearly all killed by their opponents. Yang Six (Fu Sheng) is driven to insanity, while Yang Five (Liu) escapes his village and seeks solace at a nearby Buddhist monastery. Initially rejected due to his violent warrior ways, he proves his talent and ability to show respect and is taken under the wing of the senior monk. As he shows the monks his formidable pole fighting skills, the monks show him a defensive way of fighting and the opportunity for inner peace. However, old foes threaten the family he's left behind and ultimately the stage is set for a fantastic showdown.


Lau Kar-leung, director of the film handles the reins with ease, having already made some of the most iconic films in the Shaw Brothers catalog, including Liu's "Chamber" films. He would go own to direct Jackie Chan's "Drunken Master II" and when one pays close attention to the evolution of the action scenes in Kar-leung's career, one sees a master who still remains a student devoted to self-improvement. "The Eight Diagram Pole Fighter" utilizes wirework masterfully, never straying into the fairy tale level that most people think of when they hear the term. It's mainly relegated to allow for "slow-mo" style movements, a technique a modern day director would just fake with CGI. Unfortunately, Kar-leung does get a little too carried away, especially in the opening scene, allowing the patriarch of the Yang's to jump 20 feet in the air and head butt the top of a pillar. It's a "gag" that's as goofy as it sounds and compared to the rest of the fight scenes, this opening sequence is a little too melodramatic. 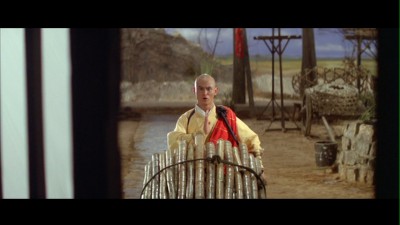 Fortunately, once Yang Five enters the monastery, the fights are a lot more practical, culminating in a no-holds barred finale that remains one of the best action sequences ever filmed. Kar-leung and the film's cast don't miss a single step, mixing the wirework with traditional stunts; the result is often seamless unless you're really looking to scrutinize. Liu is a force of nature, maxing the bamboo poles he employs as weapons extensions of his body, with a cartload initially at his disposal, he's as deadly as any gunfighter. When Kar-leung interjects some humor into the intense fighting, this time it works, because the time was taken early on in the film to set-up the payoff. In fact, "The Eight Diagram Pole Fighter" has a very solid script that engages even when there's no action taking place.


While following the traditional format of the hero learning and/or improving his skills on a quest for revenge and redemption, the philosophical lessons Yang Five learns at the monastery are in no way hokey or contrived. The notion that the monks are peaceful defenders is sold earnestly without irony and we come to respect their ways along with Yang Five. I honestly can't stress enough how simple and elegant the entire package is. Every action sequence is appropriately built up to and serves a purpose, this isn't merely a collection of thinly strung together sequences like in the recent Thai hit, "Tom Yum Goong." This is old school filmmaking at it's best and rightly deserving a place at the top of any martial arts "best-of" list.


The 2.35:1 anamorphic widescreen transfer is absolutely beautiful. Amongst fans of Chinese films, it's often known that original prints weren't always treated well and even more recent films such as Johnnie To's "The Mission" sport DVD transfers that look extremely rough. This remaster, licensed from Celestial sports a soft look at times and merely above average detail, however color levels are well balanced along with contrast, for what is likely the best transfer possible. Best of all, print damage is essentially non-existent.


The Dolby Digital Mandarin mono track is a fairly solid outing, preserving the original sound mix, but not perfect, even when compared to other mono tracks. There's some high-end distortion that sometimes plagues these vintage releases. Still, it's a well-balanced mono track and no one element (effects, dialogue, or score) overwhelms the other. In all reality, we're lucky to have a track free of pops and hisses. An English mono track is also included. Subtitles are present in English, Spanish, and English for the hearing impaired.

One of the finest martial arts films finally gets a proper US DVD release. Dragon Dynasty ports all the fine technical elements and only disappoints with zero supplemental material. "The Eight Diagram Pole Fighter" is a masterpiece of storytelling and action, all carefully handled by a great director and a star who had to step up at the last minute, saving a film from possible tragedy due to the tragic loss of it's original lead. The disc deserves place in almost any film collection and even despite it's lack of extras I don't have a problem bestowing the highest recommendation. DVD Talk Collector Series.