Paramount // Unrated // July 27, 2010
List Price: $39.98 [Buy now and save at Amazon]
Review by Stuart Galbraith IV | posted August 10, 2010 | E-mail the Author
When CBS DVD-Paramount released Sgt. Bilko - The Phil Silvers Show - 50th Anniversary Collection, a "best-of" set, back in May 2006, fans of the classic 1955-59 comedy series cried foul. While that set's extra features were nothing short of fantastic, many interpreted its release as a sign that full-season sets would not be forthcoming, that the 50th Anniversary set was going to be it, DVD-wise.

They weren't too far off. There were no new Bilko releases during the rest of 2006, and nothing in 2007, '08 and '09 either. But at long last comes Sgt. Bilko - The Phil Silvers Show - The First Season, a 5-disc set featuring all 34 shows from the acclaimed 1955-56 television year, along with many of the same extra features as in the 50th Anniversary set.

It's taken too long but it's well worth the wait. Sgt. Bilko - actually, that was its syndication title; originally it was You'll Never Get Rich, then The Phil Silvers Show - is one of the all-time great situation comedies, probably in the top five. Built around the unique talents of the irreplaceable Phil Silvers, its like will never be seen again. Need proof? Try watching Sgt. Bilko (1996) with Steve Martin. 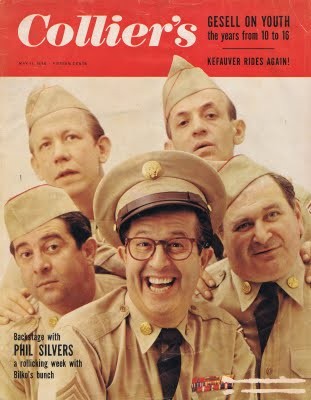 Though Silvers's unique comedy persona - the outrageously unscrupulous, fast-talking shyster - completely dominated the series, the supporting cast was equally one-of-a-kind and memorable. Up till then movies and TV shows about the armed forces featured generically handsome, recruiting poster-types. On Bilko the men all looked like mutts rescued from the pound. Where war movies usually had a wisecracking, ruddy-faced and uneducated guy from Brooklyn, Bilko's platoon was like a convention of this genre stereotype.

But there were lots, lots more famous or familiar names lurking among Bilko's or the other sergeants' platoons, and part of the fun watching Bilko is in catching these up-and-coming stars and character comedians. For instance, in the "The Boxer," both Johnny Haymer, later Sgt. Zale on M*A*S*H, and Barney Martin, Jerry's father on Seinfeld, are clearly visible but have only a few lines; neither is credited on the IMDb. Over time, George Kennedy (who began his career as Bilko's military advisor), Joe E. Ross & Fred Gwynne (pre-Car 54, Where Are You?, another Nat Hiken series), Al Lewis, Alan Alda, Dick Van Dyke, and Murray Hamilton would appear, as well as Silvers's and creator Nat Hiken's sports star pals: Rocky Graziano, Whitey Ford, Sam Snead, Red Barber, and Yogi Berra among them. The series was, along with The Honeymooners, among the few late-'50s sitcoms shot in New York, not Hollywood, accounting for the presence of so much East Coast talent.

And like The Honeymooners, Sgt. Bilko is amusingly rough around the edges. Actors fluff lines and occasionally ad-lib; so long as they recover reasonably well the minor mistakes are left in the show, and some of this is as funny as Nat Hiken's scripts.

In other words, Sgt. Bilko was basically the same show week-after-week - but what a show it was! Bilko's breezily charming conniving is irresistible and, incredibly, never loses its freshness, even long after Sgt. Bilko was cancelled and Silvers continued with the persona in all but name for most of the rest of his career, whether guesting on Gilligan's Island (which his company co-produced), appearing onstage or in the film of A Funny Thing Happened on the Way to the Forum, or in the Carry On French Foreign Legion comedy Follow That Camel (1967). (Reader Sergei Hasenecz adds, "While this is true, it does make it sound like that persona did not exist before Bilko. It did. Silvers's pre-Bilko movies don't always show it [he described his character in these as "Blinky"], but his burlesque, Broadway, and nightclub persona was already that of Bilko before the TV series.")

Thirty-four full-frame episodes are presented in their original full-frame aspect ratio over five single-sided discs. Ten of these shows were also included in the 50th Anniversary set, but 24 new-to-DVD episodes is still par for the average TV season today. The shows are uncut and look okay, if variable and not particularly pristine, though perfectly acceptable. All include the Sgt. Bilko openings but as an extra feature sample original network openings (as "You'll Never Get Rich") and commercials for Camel cigarettes and Pontiac are included. Optional English subtitles are included.

Supplements are generally carryovers from the 50th Anniversary set, less material particular to seasons 2-4. Included is the Lost Audition Tape, a 33-minute pilot film preserved as a 16mm kinescope culled from the Nat Hiken Collection. It's virtually identical to "The New Recruits" with one major exception: Jack Warden plays Corporal Henshaw; a season five episode of The Lucy Show featuring Silvers, "Lucy and the Efficiency Expert"; and audio commentaries by Allan Melvin (his audio introductions are not included this time out) on "New Recruits" and George Kennedy - a wonderful, anecdote-filled one - accompanying "The Court Martial."

Needless to say, this is a must-have for any serious student of comedy and/or classic American television. It's as fresh and funny as it was more than half a century ago and it comes with many of the same fine extras as the superlative 50th Anniversary set. A DVD Talk Collector Series title.