Lionsgate Home Entertainment // PG-13 // August 10, 2010
List Price: $26.98 [Buy now and save at Amazon]
Review by Justin Felix | posted November 1, 2010 | E-mail the Author
The Taglines:
An epic journey to save the world.
A Fantastic ADVENTURE Leads Two Teens on a Journey to SAVE THE WORLD! 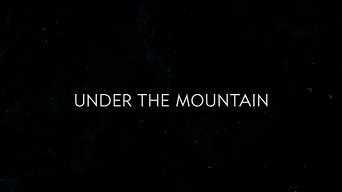 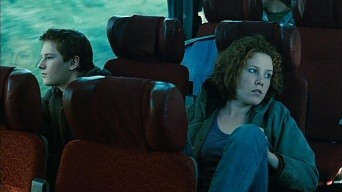 Under the Mountain, a contemporary New Zealand genre import given a Stateside home video release courtesy of distributer Lionsgate, is one of those rare films that I actually wished was longer - much longer. This film is a fantasy adventure for young adults, tinged with a little science fiction. It has an interesting pair of heroes, beautiful cinematography, and some decidedly creepy antagonists. However, the story (credited as an adaptation of a novel by Maurice Gee) is surprisingly dense, and its layers are revealed much too quickly and abruptly to satisfy fully.

Under the Mountain tells the story of troubled teen twins Rachel and Theo (played very well by Sophie McBride and Tom Cameron) who temporarily move in with their aunt and uncle - and sex-crazed cousin - after the untimely death of their mother. Their father, reportedly, is not dealing well with his wife's passing, though this, like a lot of character details, is not explored in any depth. Rachel and Theo, it should be added, share some form of telepathic bond, as they are able to "whisper" inside each other's heads.

Transplanted to Auckland, they quickly run afoul of the neighboring Wilberforces, an odd assortment of people who are really evil shape-shifting creatures from outer space living in a dilapidated house. They also meet Mr. Jones (played by industry veteran Sam Neill), a good alien who has pyrotechnic powers reminiscent, at times, of the Human Torch in the old Fantastic Four comic books, especially a neat trick where he uses fire to heal (something Johnny Storm occasionally did in the Marvel Universe of old). Jones gives Rachel and Theo egg-shaped stones that serve as focal points for their latent twin powers. Oh, and there are also giant Gargantua buried beneath the Earth that the Wilberforces would like to see unleashed upon our planet.

Let's see, I think this plot summary takes us up to roughly the 30 minute mark. As I said at the start, Under the Mountain develops a complex mythology in a very brief amount of time. It's too bad this film weren't longer; it's only 91 minutes but could easily have had an additional 60 to flesh out the material. The plot is rushed through so quickly that the ultimate climax ends up feeling perfunctory rather than epic. The at-times dysfunctional dynamic between Rachel and Theo was intriguing, but this too felt forced and rushed.

And that's unfortunate because there's a lot to like about this movie. Auckland, for instance, is captured beautifully on film here, and I wouldn't have minded spending more time with the two protagonists as they explored their new (and assumedly temporary) home. Even the house they stay at possesses curious architecture. The Wilberforces are genuinely creepy antagonists, especially when they skulk about late at night or transmogrify into tentacled nightmares. The Sam Neill character, a centuries-old mysterious benefactor, is also a compelling character. Both could have benefitted from additional scenes.

Ultimately, Under the Mountain is flawed, and I suspect that a 90-minute film version was not the way to bring this novel to life (of course, I haven't read this novel, so I'm only guessing). The movie frustrates because it does have a lot of potential. I'm going to recommend this film nonetheless, especially considering the in-depth extras included on the disc. More on these below. 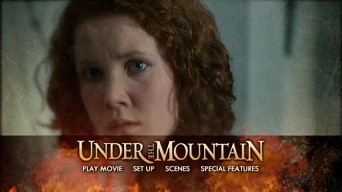 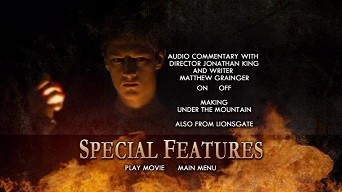 Lionsgate provides Under the Mountain an anamorphic widescreen presentation with a 1.78:1 aspect ratio. Details are strong and colors are vivid, with several Auckland locales being captured well.

Two audio tracks - both English language - grace this disc: Dolby Digital 5.1 and Dolby Digital 2.0. The 5.1 seems to be the default and was the one I listened to. The track was reasonably well-mixed, although dialogue at times was a bit obscure. Optional Spanish subtitles are also available.

Trailers for The Monster Squad, Cutthroat Island, and Battle for Terra as well as advertisements for Break.com and epix precede the main menu. They're also accessible via an Also From Lionsgate link from the Special Features sub-menu.

More significant extras include a feature-length commentary track with co-writer and director Jonathan King and co-writer Matthew Grainger. A random sampling suggests it is an informative discussion of the movie's making. Most impressive, though, is the surprisingly in-depth The Making of Under the Mountain (46:38) documentary with plenty of behind-the-scenes footage. It's presented in anamorphic widescreen to boot!

Under the Mountain, a PG-13 young adult fantasy adventure, has a lot to admire, especially good performances and some beautifully shot New Zealand locales. However, it's way-too-dense script undermines the film's ultimate effectiveness. Still, there's enough here to give the DVD a mild recommendation, especially considering the disc's in-depth extras.