Shout Factory // PG // September 14, 2010
List Price: $19.93 [Buy now and save at Amazon]
Review by Kurt Dahlke | posted August 31, 2010 | E-mail the Author
Starcrash:
If you love Starcrash like I love Starcrash, does that make you a Luigi Cozzi fan? Probably not, but you clearly enjoy the finer things in life, so now fans of director Lewis Coates (his cleverly Americanized nom-de-photon for this movie) and fans of, well, simply loving life, can rejoice, because this masterpiece of mimicry mayhem has come to Earth in a fabulous 2-Disc edition! Yet the uninitiated ask, "what is it?" Starcrash is possibly the best Star Wars imitation ever unleashed upon the world. Made on a ten-dollar budget and missing iota-one of the style, skill and coherency of the former gigantic achievement, Starcrash instead churns up spectacularly whacked-out surrealism on every possible level. 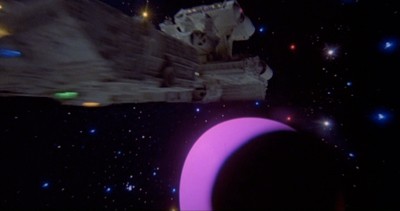 It's not like there's a story to follow, more like a series of events loosely strung around the ever-present threat of Joe Spinell as the evil Count Zarth Arn. Hey, at least they had the decency to change the 'd' of Darth to 'z', right? But Zarth is troublesome, as is the notion of a sci-fi epic headlined by Spinell and David Hasselhoff in his debut. Sure the quixotic Marjoe Gortner (how's that for a matinee idol name?) and all-around tremendous Caroline Munro are the real stars, but that's not how the credits roll. In any case, Stella Star (Munro) and Akton (Gortner) spend some time chased by the space cops, including a robot cop, Elle, (Judd Hamilton) who must be some sort of cross between C3PO and Slim Pickens.

Eventually Zarth threatens the universe with a super-powerful weapon - it's either a spaceship that looks like a hand or a leftover lightshow from a Grateful Dead concert, I'm not really sure since whenever the lightshow appears it's always referred to as being composed of monsters - and monsters are not my idea of a doomsday weapon. At any rate the Emperor of the Universe or whatever (Christopher Plummer drifting in on an Oxycontin haze) blithely settles everyone's hash by stopping time for a bit. Clearly, the value of Starcrash lies not in narrative, but in a certain mood, a mood you get when you combine LSD with nitrous oxide.

This effect is created unintentionally, I hope, or maybe not, because a movie like this made simply for the fun of it would restore my faith in the human race. Whatever the case, you'll never have a dull moment with this combination of boiled-over melodrama, bizarre scripting, isolation-booth performances from confused actors, and special effects that form a beautiful, surreal patchwork. 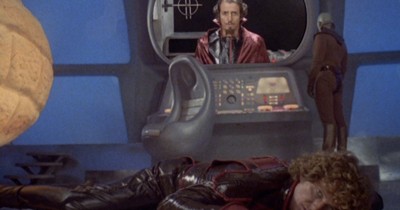 Of course Spinell chews the most scenery, his unhinged stare fairly shooting his words around the set, especially when he's at his most eloquent, twirling in his cape bellowing, "kill! Kill!" during a climactic battle scene. (Starcrash logic being what it is, our heroes quietly watch the battle on a huge screen. Presumably the Emperor of the Universe has a constant supply of daiquiris ready for everyone.) Daiquiris would also explain why the lovely Munro (dubbed by another actress revealed in the commentary) so breathlessly intones things like, "go for hyperspace!" before throwing down leather-bikini karate moves on a bunch of animated robots. Meanwhile her costars, especially Gortner as Akton, the poorly defined alien, seem to be in entirely different movies. Gortner comes off as a mysteriously chipper cross between Popeye and Mork from Ork, (I know) and is entirely unsuited to this type of film, which is why he's next to perfect. 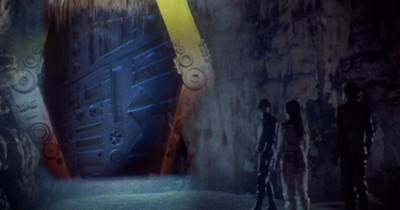 But what really pushes this one over the edge into the bubbling pit of great cinematic madness is the special effects. Rainbow hued space stations, giant stop-motion robots and compositing done with a rusty chainsaw mean nearly every frame of this movie would translate into a beautiful surrealist wall poster. Plus, there was never a warmer, cozier version of space itself than Cozzi's version, replete with gaily-colored planets and stars literally made from Christmas lights, draped in front of crushed velvet blackness. Star Crash is a cinematic masterpiece wrought from a painfully low-budget, crackpot aesthetics and near-total cluelessness, and anyone who loves Luigi Cozzi, or cinema in general, needs to see it now.

Video:
Though I don't have any previous, out-of-print or foreign DVD releases to compare it to, I do have my memories of a long-ago VHS viewing, and I can tell you that this is light years beyond. In fact this new anamorphic widescreen transfer, a 1.78:1 ratio, is truly stellar. Colors are rich and oh-so-warm, they're really gorgeous, while black levels are inky and deep. Yes, there is film grain, the levels of which vary depending on which elements you're looking at, but otherwise, the transfer is quite crisp. Maybe too crisp, since detail levels really accentuate the patchwork nature of some of these shots. Ultimately, what you get is a fantastic looking edition of a criminally short-changed epic.

Sound:
This comes with an English Dolby Digital 5.1 Audio Track that seems to sound great, as well as a Dolby Digital 2.0 track for shlubs like me. Care was clearly taken to get the mix right, with all elements at respectful levels to one another. Dialog is clear and essentially distortion free, while the frequency range is pretty broad. My set-up doesn't go past faux-surround sound, so what I heard sounded fairly basic in terms of separation, but obviously way more active than that old VHS. Finally, John Barry's understaffed-but-lush score sounds quite beautiful.

Extras:
This is a 2-Disc Special Edition. It comes with a lot of extras. Disc One sports two Stephen Romano Commentary Tracks, one scene-specific and one more all encompassing. Both tracks are well served by Romano's knowledge, enthusiasm, extensive preparation and ability to sound spontaneous even while reading from notes. Both tracks also contain tons of truly interesting information, so both are certainly worth a listen. Three iterations of the Theatrical Trailer are presented, one by itself, one with trailer-editor (and famous for other stuff too) Joe Dante providing a commentary, and one with Eli Roth from his Trailers From Hell website. If you think there's no reason to watch the same trailer three times in a row, you're wrong. Also you get the French Theatrical Trailer plus a TV and Radio Spot.

As far as featurettes go, a Calum Waddell-helmed 40-minute Interview with Luigi Cozzi covers many, many more bases involving the tumultuous creation of this film. If only Cozzi's accent were a little less thick. Film composer MARS of Deadhouse Music provides an almost 20-minute Commentary on the Music of John Barry, wherein he listens to his favorite themes from the soundtrack, and talks about what's unique and special about this awesome score. The standard keepcase with flipper also contains a 12-page set of Liner Notes, providing stories from Romano's personal history with, and love of the movie, as well as other neat tid-bits and the knowledge that this release is the American Release version, some minutes shorter than the Italian release, but arguably a tighter movie. You also get five lengthy auto-nav Photo Galleries with the usual types of shots, save for the fact that many of them are captioned with even more amusing and interesting behind-the-scenes nuggets of knowledge.

Disc Two keeps the extras party going with 17 Deleted/Alternate/Extended Scenes which point up the unique subtlety of editing for tone and length. At about 37 minutes, much of the material comes from the American Cut presented here, but excised snippets in-and-amongst each scene reveal a different picture. A 73-minute, contemporary Interview With Caroline Munro ranks as a feature in its own right, though a visually static one, considering it consists of nothing but Munro sitting on camera. Don't get me wrong, Munro's still quite pleasing to the eye, I just would have liked more clips and stills underscoring her reminiscences from her entire career, with of course plenty of emphasis on Star Crash. At 22-minutes,A Look at the Special Effects of Starcrash with Armando Valcauda takes the time to examine Valcauda's start using archival footage, the animator's early work, and charming captions in Valcauda's broken English. The bulk of material is on Starcrash including rare and never-before-seen stills and a pair of wisely cut effects sequences. Romano contributes commentary to 22 minutes of fairly raw Behind the Scenes Footage, amounting to grainy B&W Super-8 footage of filming, including cut sequences. Finally, an illustrated Original Script can be accessed in your PC or Mac. Disc Two's extras skew sharply to the hardcore Crash fan, they're esoteric in their depth, but if you're psyched to get this set, you're probably already in that crowd.

Final Thoughts:
Starcrash is a masterpiece of unintentionally bad filmmaking. Pounded out in about 18 months seemingly as an answer to Star Wars, Luigi Cozzi's knock-off buzzes around with giddy brio, mixing ridiculous characters with questionably broad acting, an incredibly simple yet still nonsensical plot, and budget special effects that transcend into the realm of real art. It's a completely ridiculous movie, that's great to watch with a few friends and a beer or two. And it still manages to make my jaw drop. Plus this awesome 2-Disc edition looks great, it sounds great and it comes packed with extras, pretty much sentencing it to 220 years hard labor - in the DVD Talk Collector's Series!