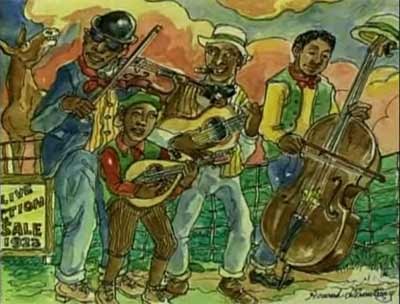 Three nights ago, I had the enormous pleasure of viewing Terry Zwigoff's debut film, Louie Bluie. Thanks to The Criterion Collection, it is now being released on DVD for the first time, a full twenty-five years after its original theatrical run. The film's eponymous subject - real name: Howard Armstrong (1909 - 2003) - was a multi-instrumentalist, a visual artist, an author, a dandy, a bon vivant, and a world-class raconteur. In short, he was perfectly suited to Zwigoff's eclectic tastes, and Louie Bluie is a hilarious, moving, and joyful tribute to this strange man whose genius mostly flew beneath the radar of mainstream American culture.

Zwigoff caught up with Armstrong in the early 1980s, living obscurely and alone in Detroit. The film takes Armstrong back to Chicago, where he was based during his musical heyday of the 1930s. There, he reunites with his former band mates to reminisce and perform a few dates in local clubs and coffeehouses. Zwigoff also follows Armstrong back to Tennessee, where he visits family and talks about developing his musical talent in the context of regional string bands.

Cutting together just an hour of footage featuring Armstrong in performance and in conversation, Zwigoff creates a loving, lively portrait of Armstrong as a man of boundless energy, limitless creativity, and accomplished virtuosity in every arena he chooses to tackle - music, art, and the spoken and written word. The musical moments are filled with ingenuity and an enthralled devotion to technique. Armstrong's artwork shows an intuitive grasp of craft and style. And his stories, told with an infectious verve and enormous wit, are both hilarious and mindful of the subtleties of word selection and timing. These stories make up the bulk of Louie Bluie, beginning with one that describes how Anderson came by his nickname - a name he recorded under in the '30s. More memorable are off-color memories of his youth, and a moment when he describes his artistic process and education to a young fan.

Zwigoff wisely allows Armstrong and his contemporaries speak for themselves; only rarely is the director heard as interviewer. The discussion is dominated by the generously verbose Armstrong. He does not provide us strictly with autobiographical information, but enough details accrue for us to understand something of his life's arc up to the early '80s. We learn about his youth and early musical career; we know he has been married and divorced twice; we are also treated to a guided personal tour of a book that he designed, wrote - in longhand, and illustrated: an inspired alphabetic survey of quasi-pornographic topics.

A one-hour film such as Louie Bluie doesn't lend itself to analysis or extensive description. It only cries out to be seen. There's nothing more inspiring than experiencing life through the eyes someone who has lived a long and storied one - and industriously enjoyed every minute of it.

Image
As Zwigoff states in the commentary, Louie Bluie was shot on safety film, a misleadingly volatile stock that was in imminent danger of deterioration. He credits The Criterion Collection with saving his movie by restoring and preserving it on this DVD release. The full-screen transfer looks fantastic, especially since it was shot in the early 1980s on 16mm film. Colors are bold and detail is strong; grain is preserved and visible. This looks like another fine job by the folks at Criterion.

Sound
The mono soundtrack is very clear; Armstrong's accented speech is never lost in the mix - nor is anyone else's, for that matter. Music is presented with excellent fidelity; the live sessions come across exceptionally well.

Bonus Content
Zwigoff contributes an informative Commentary Track that spins an engaging story about the project's genesis - beginning with Zwigoff, a devoted collector of 78s, coming across one of Armstrong's exceedingly rare records. Also included is a fantastic half-hour of Unused Footage, featuring more tales and a lot more music from Armstrong and company. A Still Gallery wraps up the extras.

I am adding Terry Zwigoff's Louie Bluie to that very short list of films that I refer to when I'm not feeling terribly positive about life. It's an honest movie that captures the spirit of a man with enormous creative energy and an inspiring zest for everything. DVD Talk Collectors Series.