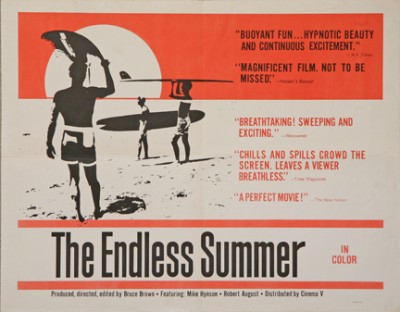 An opportunity to watch The Endless Summer again is never an unwelcome thing. Bruce Brown's knowing, witty paean to surfing retains all of its charm after more than forty years. With limited resources, Brown crafted a polished, exciting portrait of the sport, highlighted by bold photographic techniques and skilful editing that capture the thrill of surfing everything from Malibu's gentle but sturdy breakers to the legendary monster waves of Oahu's North Shore. Brown is not interested in the origins and culture of the sport, but in the specific skills and strengths of its key practitioners. Many of the great surfers of the mid-60s are featured here, and Brown carefully documents their achievements with great admiration.

The film's wraparound narrative concerns the globe-trotting adventures of two surfers, Mike Hynson and Robert August, who embark on a trip around the world in search of the titular season and, of course, the perfect wave. They find both: the first, as a result of their sub-equatorial destinations, moving from west to east, and the second at a deserted (and desert-like) beach at Cape St. Francis, South Africa. The pristine and previously-undiscovered break at this site provides the most memorable surfing in the film: extraordinarily long breakers that maintain a consistent, smooth integrity such that rides easily last several minutes apiece.

Hynson and August surf in Senegal, Ghana, South Africa, Australia, New Zealand, Tahiti, and Hawaii. Brown's enthusiastic filmmaking invites us to experience the manifold rush of surfing, and educates us as to the varied nature of the surf itself. The Wedge at Newport Beach is a case in point; this bizarre (and dangerous) break features huge waves that crash directly onto a banked beach. It offers a tempting challenge to surfers (and bodysurfers) who must understand its peculiar features in order to avoid a broken neck.

Prior to The Endless Summer, Brown had made a number of shorter, silent documentaries about surfing, which he would tour roadshow-style at high schools and public auditoriums, providing live narration himself. The Endless Summer was his first "completed" feature, with music by The Sandals and recorded narration. It was shot on 16mm cameras and might be the most beautiful film ever made on that gauge. Although sharpness is accordingly reduced, Brown's feeling for color and composition easily overshadows any perceptible technical limitations. Although most of the photography is shot from the shore, Brown occasionally mounts a surfboard himself in order to capture the technique of his subjects up-close. Complementing the undeniable appeal of the images is a fluid editorial style that moves the narrative forward while allowing for the odd tangential sequence in Hawaii or Santa Cruz or Newport Beach.

Brown's narration showcases the filmmaker's intimate knowledge of the sport, the vagaries of the ocean and its behavior, and the hard work and consummate skill of his surfers. Since the film was shot without live sound, the music (by The Sandals) and narration make up the bulk of the soundtrack. Brown has a whimsical Californian sense of humor that prevents his delivery from ever being heavy-handed; his considerable expertise never comes across as elite.

It's plain that The Endless Summer remains enormously influential - a beautifully-filmed ode to a sport and its talented (and unfairly ridiculed) devotees. It maintains a keen appeal even as it ages. Brown is now recognized as one of the inventors of the sports documentary, but his skills as a filmmaker - regardless of genre - remain impressive, particularly given The Endless Summer's tiny budget.

The DVD
Monterey Media is re-releasing The Endless Summer in a two-disc package it's calling a "Director's Special Edition." This doesn't bring us an extended cut of the film, but rather a digitally re-mastered one, and a fine-looking job it is. I watched the feature on a Blu-ray player connected to a 42-inch full HD monitor - with none of the artificial enhancers activated. The 1:66:1 image looked outstanding. Keep in mind that this was shot on 16mm about 45 years ago. The color is astonishing, and Brown's sense of composition, along with the nonchalant physicality of his shots, is finely serviced through this excellent transfer. The sound has been cranked up to 5.1 surround, although a stereo track is also available. The clarity of each is crystal, and the 5.1 track doesn't add much, given the limited range of the original track. There is added ambience, though, although I think I prefer the two-channel track.

Bonus Content
All of the bonus content is relegated to the second disc. A Look Back at The Endless Summer (40:54) is a thorough retrospective that takes a look at Brown's career, the making of the film, and its considerable legacy. Bruce Brown Timeline (4:21) is a short video overview of Brown's life and work. Revisiting The Endless Summer (6:25) is a teaser for the film of the same name, a film of outtakes from The Endless Summer and its sequel, compiled a few years ago by Brown and his filmmaker son, Dana. Artwork from Around the World (1:58) collects images of different versions of the film's poster. There are also text biographies and a text screen about the film's famous poster image.

The Endless Summer is an exemplary, exhilarating film. Its elegance and mass appeal haven't aged a day since 1966. Monterey Media has done an excellent job cleaning up the film's image and sound for this new DVD release, and have assembled a thoughtful group of bonus features, as well. As a fan of the film, I could have used even more in the bonus department, but the film is so powerful in its simplicity, elegance, and lightness that it hardly matters - plus, the newly-spruced image is just stunning. DVD Talk Collectors Series.