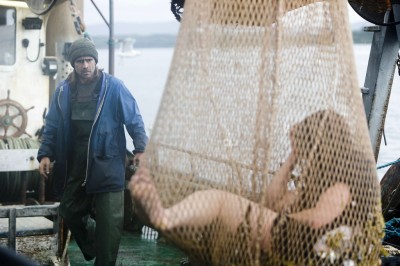 With "Ondine," writer/director Neil Jordan pits the conventions of fairy tales against the harshness of the real world. It's a picture of mystery and possibility, but reveals itself to be quite distant when the mood strikes. For a film that holds such admiration for the magic of fables, it's a little strange to find "Ondine" so emotionally aloof, despite the best efforts of the exemplary cast to breathe some kindness into its flooded lungs.

A fisherman working off the coast of his small Irish town, Syracuse (Colin Farrell) has landed quite a catch when he finds a young woman in his net one morning. Frightened and wary of outsiders, the girl, named Ondine (Alicja Bachleda), immediately takes to the shelter Syracuse provides, eventually befriending his young daughter Annie (Alison Barry), who's stricken with kidney disease. Adding up the clues, Annie suspects Ondine is a "selkie" (a mermaid type of creature, hiding in sealskin), sent to help her troubled father, who soon comes to the same conclusion. However, while Ondine falls in love with Syracuse, she possesses dangerous secrets that bring trouble to the town, threatening to reveal her true identity.

There's a beauty to "Ondine" that's undeniable. Shot against beautiful gray-green Irish locations, with a story told piece by piece in a leisurely manner befitting a storybook, the picture does cast a palatable spell during its early going. Setting up Ondine as a figure of probable magic, the screenplay economically compresses the standoff between the selkie and Syracuse, who fall in love at first sight: he drawn to her purity of spirit and heavenly origin, and she taken with his soulful kindness and acceptance of unusual circumstances. For a film that prefers a slower pace, "Ondine" sure takes off in a hurry, firming up romance and trust issues within the first act, leaving the rest of the film open to enjoy the mystical circumstances and developing intimacy between the characters. 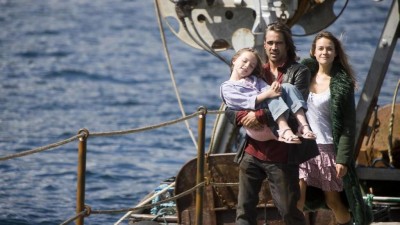 "Ondine" isn't interested in hugging the viewer. The film remains at arm's length for the entire running time, creating a frustrating divide between the audience and the characters. Jordan refusing a Disneyesque route to the modest miracle at hand is perfectly understandable, but there's a stillness to "Ondine" that never washes away, despite a script that requires an emotional commitment in the end to find the full flavor of the writing. Ondine's mystery is convincing, but never spellbinding, while Syracuse's troubles with booze and the weight of the world register indistinctly to sate Jordan's hazy storytelling fixations. The picture never jumps to life despite plotting that encourages otherwise, leaving the film preoccupied with colorless behavior.

The cast holds "Ondine" together better than Jordan can, with Farrell terrific as the itchy sailor stumbling upon a lovely miracle. The actor conjures some chemistry with Bachleda, but he's better on his own, or with young Barry -- a frighteningly alert young actress who steals the movie as Ondine's true believer.

"Ondine" peters out long before it has a chance to tangle in some curious plot twists. While parts of the feature are striking, the direction appears distracted by a tone it never quite achieves. It's a film of unique quandaries executed by an ace cast, but "Ondine" doesn't leave a lasting impression, only mild enchantment with a handful of exceptional moments.