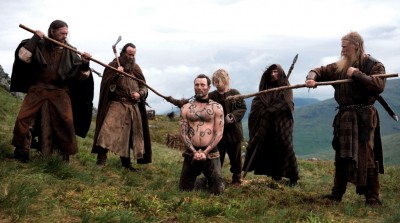 Like your Viking stories with a hefty side of the abstract? "Valhalla Rising" is filmmaker Nicolas Winding Refn's dreamlike interpretation of the battle between man and earth, taking those brave enough to accept the challenge of this film on a journey outside the reassurance of reality. It floats a vicious tale of Vikings and warriors in a still sea of the unknown -- a metaphysical realm of nightmares and stamina that comes together rather splendidly, but only for those moviegoers with a heightened sense of art-house adventure.

A prisoner locked up by a small band of Norse warriors, One-Eye (Mads Mikkelsen), mute and disfigured, is forced to fight for his life to entertain his captors. Freeing himself and taking off across the land, One-Eye and his sidekick, a boy named Are (Maarten Stevenson), soon find themselves in the company of Christians eager to cross the sea and join the Crusades. The journey is unforgiving, forcing One-Eye to protect Are by killing more men. Expecting Middle-Eastern lands when the fog lifts, the men are surprised to find a forest environment inhabited by an aggressive indigenous tribe. As One-Eye attempts to assess this new land, the men find deadly hostility and madness, leading them to believe they've journeyed to Hell.

The director of the "Pusher" trilogy and last year's "Bronson," Refn is no stranger to acts of elusive cinema. "Valhalla Rising" is perhaps his greatest venture into the unknown, dispensing with plot and most opportunities for dialogue to simply push off into the wilds of Scotland. The film is pure behavior and observance, holding to One-Eye as he silently maneuvers through treacherous terrain, facing stone-faced enemies who know no other language besides weaponry. While highlighting a few eye-opening slaps of brutality (including a very matter-of-fact disemboweling), "Valhalla Rising" isn't interested in formulaic action beats to keep the film pulsating with suspense; instead, Refn has created a Malick/Jodorowsky hybrid film crossed with a pan of pot brownies. 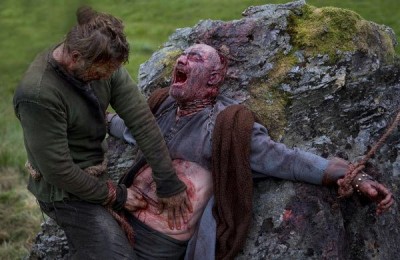 If I've made "Valhalla Rising" sound like a barbaric romp, I apologize. It's an utter slog of a movie that requires the utmost patience with Refn as he scratches his 1970s psychedelic cinema itches. The film has no rhythm or pace, it's simply something to be experienced, watching carefully as One-Eye encounters men who want to study his feral nature. What sparks wonderfully here are the environmental moods of the piece, wallowing in the discomfort of nature and the ethereal beauty it contains. Refn surveys the presence of man within this kingdom of pain, allowing extended passages of the film to simply sit still with the characters -- the midsection of the picture is almost entirely devoted to the sea voyage, observing men bored to a point of insanity, trapped in a fog that never lifts. Refn wants us to feel the passage of time, which eventually, as unlikely as it seems in the moment, leads to flashes of conflict.

The budget cinematography by Morten Soborg is extraordinary, and the lead performance from Mikkelsen is wholly commanding, despite any sort of traditional dramatic motivation. Lead by his acting efforts, "Valhalla Rising" plugs into the subconscious for the final act (actually, the entire film seems derived from dreams), making a lasting impression with its staging of finality against a backdrop of esoteric stimulation. The feature is not an easy pill to swallow, but there's something intriguing here that sustains interest, despite the best efforts of Refn to make a film almost entirely for himself.