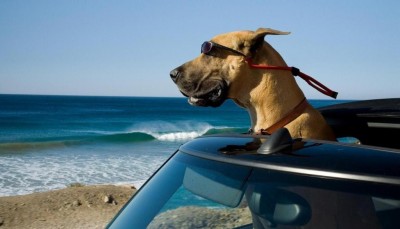 The comic strip "Marmaduke" has been a staple of newspapers since 1954, leaving the producers of the film adaptation over 50 years of canine antics to help build a screenplay. So, naturally, they invent a series of urine and fart jokes to best service the enduring legacy of the rascally Great Dane. In all, "Marmaduke" isn't quite the bleed-from-the-eyes moviegoing experience the heinous marketing suggests, but there's an overpowering amount of laziness here that detracts from the core of good-natured mischief the character should be displaying.

Living it up in Kansas with the Winslow family, including parents Phil (Lee Pace) and Debbie (Judy Greer), dog Marmaduke (voiced by Owen Wilson) enjoys a certain freedom palling around with kids and his feline sidekick, Carlos (George Lopez, of course). When Phil is offered an amazing job with an organic pet food company run by stern boss Don (William H. Macy), he uproots the Winslow household and takes the gang to California, where Marmaduke befriends a few helpful strays, including lovesick Mazie (Emma Stone). Trying to find his footing in this alien land, the Great Dane unintentionally upsets bully Bosco (Kiefer Sutherland), who's fiercely protective of his neighborhood and his girlfriend, Jezebel (Fergie).

Coming from the team that scripted "Smother" and "License to Wed," it seems "Marmaduke" never stood a chance against assured mediocrity. It's a robotic picture for undiscerning family audiences, mindlessly working through the motions of doggy tomfoolery and domestic melodrama (Phil's hounded by neglectful dad issues) before everything's wrapped up with big action finale, doling out the canine comeuppance with the least amount of effort possible. There's a substantial amount of negative to "Marmaduke" that often drags the film to a dead stop, with a labored screenplay that barely smuggles any imagination into this world of talking dogs and cats that occasionally surf and ingest magic mushrooms. You already know "Marmaduke" isn't a stellar movie, so let's focus on the positive. 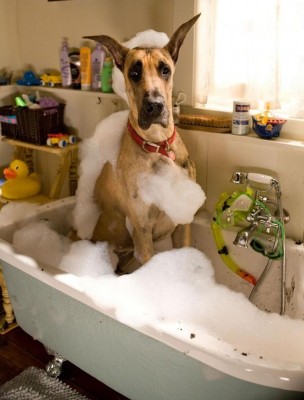 The voice cast here to help cartoon the live-action movie along is a bonus, with a likable range of tones and comedic speeds to add some sparkle to an otherwise dreary film. Wilson is basically Wilson as Marmaduke, but his energy level is uncharacteristically high, matching the dog's building-sized frame with a commanding bit of vocal quirk. Also charming is Stone as friend-zone pooch Mazie. The actress has killer rusted pipes for animation, supplying needed spunk and concern while everyone else is allowed to carry the merriment. Sutherland also enjoys his time as the baddie, growling (and drooling -- the dog, not the actor) up a storm. It's an amusing cast (including Christopher Mintz-Plasse, Steve Coogan, and Sam Elliot as the feared "Chupadogra") shoving some much needed personality into the film, making the dog interaction sequences the highlights of the picture.

Director Tom Dey ("Failure to Launch") makes something of an effort, trying to sneak in a few Adult Swim-style gags (like the aforementioned drug-ingesting dogs) to counteract the bodily function humor, but it's a lost cause. Once "Marmaduke" switches over to sitcom mode for the finale (which, uncomfortably enough, features a sinkhole threat), the formula swallows what little passes for fun. With a tank of a dog causing trouble, occasionally wisecracking, and frequently dabbling in neuroses, it seems "Marmaduke" could've been something, if not great, at least winningly odd. Instead, it's dull and conventional, turning a half-century of mischief into 80 minutes of yawns.