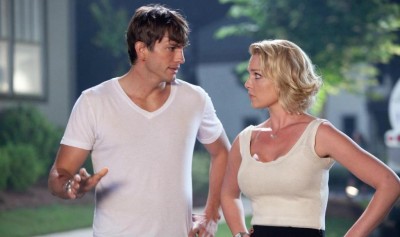 Over the last few years, Katherine Heigl has faltered mightily picking romantic comedies. With "27 Dresses" and "The Ugly Truth," the actress submerged herself into pure stupidity, slapping feminism across the face by playing a chain of subservient female characters who set aside self-worth for the chance to seize a man. With "Killers," Heigl stares down Ashton Kutcher, another vapid thespian with limited acting mobility. The two make a pretty pair, but they're not a rousing big screen match, ineffectively teaming up in this unconscious, insistently unfunny action comedy.

In France to nurse her wounds after a bad breakup, perky Jen (Katherine Heigl) meets mysterious Spencer (Ashton Kutcher), and the two quickly fall in love, much to the concern of Jen's protective father (Tom Selleck). Years later, with their domesticity established, Jen fears a staleness has entered her marriage, leaving her to attempt to jolt some life into her husband. To her horror, Jen learns that Spencer is a C.I.A. assassin with a boss trying to pull him back into the game after a three-year absence. Now facing a hefty price on his head for his insubordination, Spencer has been targeted by every possible hitman around, forcing him to hit the road with a shocked Jen in tow, searching for the creator of the bounty before someone takes him out for good.

Reteaming with her "Ugly Truth" director Robert Luketic (also of the miserable "Monster-in-Law" and "Legally Blonde"), Heigl is the big name attached to "Killers," but it's truly Kutcher's big show. As the 007 Jr. figure with a waxed chest and Justin Bieber bangs, Kutcher's the guy running around getting his rocks off with this actioner, wielding a gun, dodging bullets, and kissing Heigl's breasts. There's no "Mr. & Mrs. Smith" dynamic in play here, just a guy creating a light ruckus while his bride stands in the distance and screeches her reactions. With Heigl's dominant personality, I was hoping for something with a little more equality. Instead, she's in full Lucy mode. 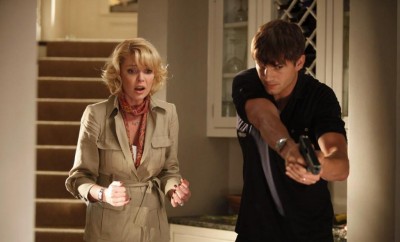 Luketic, facing the challenge of his first action picture, doesn't exactly understand the mechanics of the genre. He films the picture flatly, using shaky-cam to convey the presence of tension, while pushing a supporting cast of dreadful comedians (Rob Riggle, Kevin Sussman, Lisa Ann Walter, and Alex Borstein) to act as the light of the piece while Kutcher poses and Heigl squeals. That "Killers" is an utter bore is remarkable, considering the bullet-happy screenplay and potential for chaos once Spencer learns of his predicament. However, it takes nearly an hour of screentime before the hired help begins taking shots at our heroes, leaving an unbelievably bland opener communicated by two actors sharing little in the way of chemistry.

Fans of mystery movies should be miles ahead of anything "Killers" offers in the twist department, but predictability is the least of this picture's concerns. Luketic doesn't provide any whiff of excitement, kinetic energy, or snappy repartee -- there's not a laugh or a thrill around. Instead, "Killers" tries to play cute to make an impression, desperate to become a date movie when it seems the script, at one point or another, was intended to raise hell. Luketic was the wrong man for the job, but it's difficult to place the failure of "Killers" on him when there's not a soul around who could make sense of the script, especially with Heigl and Kutcher in the lead roles.