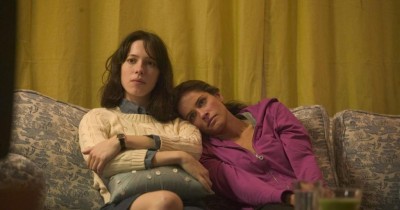 It's "Liberal Guilt: The Movie" in Nicole Holofcener's latest endeavor, the dramedy "Please Give." An odyssey into the itchy folds of shame and privilege, the picture slices to the bone, presenting a community of characters struggling with their perception of limited moral fiber, while some flaunt their curdled nature. It's a parade of unlikable, flawed folk interpreted with equal parts horror and sympathy in the filmmaker's screenplay, assuring something obnoxious when, in fact, the film seldom bubbles with disgust, electing to understand the brittle nature of the bleeding heart mentality.

Kate (Catherine Keener) is a troubled soul, spending her days rummaging through estate sale furniture to resell at her own shop, co-owned with husband Alex (Oliver Platt). Kate also suffers from horrible bouts of guilt, reminded of her health and financial stability as she walks the streets of New York City, surrounded by the disadvantaged. Rebecca (Rebecca Hall) is a breast cancer radiology technician trying to keep her 91-year-old grandmother in check, while sister Mary (Amanda Peet) couldn't care less, lost in her own self-centered preoccupations. As these characters mingle and mope around the city, it becomes clear that this unhappiness must change, necessitating a look inward to suss out the very nature of culpability, especially when cranked to absurd proportions.

"Please Give" opens rather uniquely, starting with a mammogram montage of squished breasts to backdrop the opening titles. Take it as a warning shot for the film that's about to come, merging a highly unexpected perspective of medical routine with the inherent doomsday mood of the picture. "Please Give" is a rather difficult film to explain in detail, as it reflects a specific mood of social disgrace, which has become something of a fixation for the writer/director behind "Friends with Money" and "Walking and Talking." 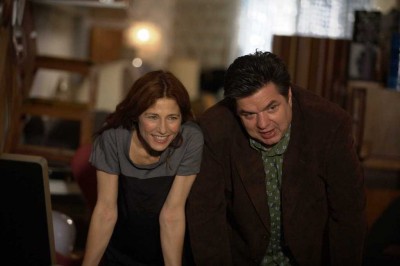 Here the poison is guilt with a capital G, which infests the characters as they walk headlong into bad decisions, allowing the verbal diarrhea to drip from the corners of their mouths. Kate is especially lashed with mortification, hoping to wipe away the gloom by spreading money to the city's homeless and attempting to volunteer with the elderly and mentally challenged. All the while, the character is faced with a sexually disinterested husband (they're more pals than lovers), a child suffering through horrible acne while demanding $200 jeans, and feeling an encroaching sense of paranoia as the ugly particulars of her job (low-balling the bereaved for profit) are finally starting to seep in. Rebecca doesn't get off light either, facing her own troubles with a cranky grandmother nearing death, the humiliation of the dating world, and a tanned sister who simply refuses the idea of kindness.

So who wants to watch a movie featuring these miserable bastards? Holofcener's gift is her ability to merge the toxicity of the characters with her sharp observations of human behavior. Nothing in "Please Give" slips out of control, with only a few flashes of theatricality introduced to help push the story along. These are ugly folk, but they are human, despite their reckless ways, and Holofcener treats the hostility with a healthy sense of humor, scripting sharp lines of passive-aggressive behavior and panicked confessions that assist in the broader portrait of bewilderment.

The cast adds even more dimension to the film, with Keener staying consistently on edge, while Peet captures bratty disdain wonderfully, and Steele shows amazing life as the only character semi-allowed to be functionally irrational. "Please Give" thrives because of these professional efforts, which help to mold something strangely poignant and thrillingly neurotic out of a plot that should rightfully be nothing more than a cinematic air horn.