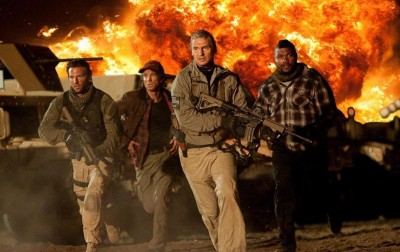 "The A-Team" was a successful NBC television show that ran from 1983-1987, enthralling kids with explosions, sprays of gunfire, slapstick, and a celebratory display of heroic teamwork. The show was undeniably primitive, but triumphantly charismatic, held together by diverse, exciting thespian efforts from George Peppard, Dirk Benedict, Dwight Schultz, and the one and only Mr. T. Now there's a big screen adaptation from director Joe Carnahan, who takes recognized elements of the franchise and inflates his own twisted balloon animal of a picture, laying the violence and militaristic camaraderie on thick to bring an iconic '80s action show into the decidedly more cynical year of 2010.

Bound together by their Army Ranger discipline, John "Hannibal" Smith (Liam Neeson), "Faceman" Peck (Bradley Cooper), Bosco "B.A." Baracus (Quinton "Rampage" Jackson), and "Howling Mad" Murdock (Sharlto Copley, "District 9") are facing the end of the Iraq War, tempted by an offer from C.I.A. provocateur Lynch (Patrick Wilson) to retrieve a set of counterfeit plates held in the heart of Baghdad. When the team is betrayed by an unknown source, they're stripped of rank, dishonorably discharged, and sent to prison. Again prompted by Lynch to reclaim the plates, Hannibal masterminds four prison escapes to reunite the team, while Department of Defense lackey, and Peck's former flame, Capt. Carissa Sosa (Jessica Biel) attempts to track their movement. On the hunt for revenge and a chance to clear their names, the A-Team finds the situation more corrupted than previously imagined, kicking off a series of schemes and shootouts while trying to outwit the enemy. 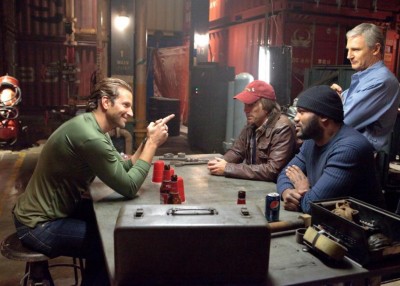 Much like Michael Bay, Joe Carnahan directs with a full erection, which is put to good use guiding "The A-Team" to a series of manly highs and lows. The ultimate guy show, "A-Team" was a wonderful vessel of prime time bravado and bravery -- a cocktail Carnahan respects with his flagrantly absurd screenplay, which dwells on the cigar-chomping, bullet-bouncing, fist-first bible arranged by creators Stephen J. Cannell and Frank Lupo. The picture isn't camp, but it winks on occasion, paying tribute to the show while forging its own identity as a potential summer franchise, creating a solid origin tale for the characters as they bond over beautifully executed plans and various degrees of armament.

The man behind "Narc" and "Smokin' Aces," Carnahan loves to push action and brawny behavior to the limit, and while "A-Team" is branded with a PG-13 rating, the picture does summon a nice lather of testosterone, pitting our heroes against an enemy just as highly trained (led by former teen heartthrob Brian Bloom, excellent here in a supporting role while also taking a co-screenwriting credit), making the conflict more about chest hair and penis size than the whole counterfeit plate mumbo-jumbo. The plot is extensive, twisty, and careful to make time for the gang; to his credit, Carnahan takes the material as seriously as he can, leading to a few awkward melodramatic lunges where the film loses its cool factor trying to attach some weight to the team's loss of military honor.

The script tries characterization, but the soul of "The A-Team" has always been found on the battlefield. Staging a series of chases and jailbreaks, Carnahan is like a kid on Christmas with this picture, ramping up the ridiculousness a few clicks with every new threat. The editing is overanxious, but the spirit remains, exemplified in a mid-movie corker that has the boys evading a pair of missile-happy drones while moving from a burning cargo plane to a parachuting tank. It features explosions galore, but the script keeps Hannibal's lust for preparation in full effect, delivering the subterfuge and a few hearty weapon-manufacturing montages. The ending gets carried away trying to top previous mayhem (with literal fireworks, just to be cheeky), but the majority of "A-Team" is richly chaotic and carefully silly, keeping to the show's roots. 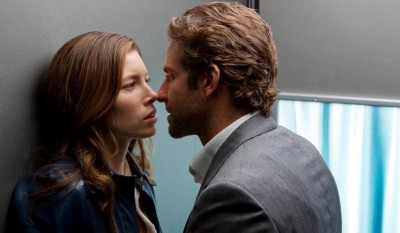 As the titular team, the actors find their specific personality beats without much fuss, outside of some overeager expository dialogue. Neeson is a gas as Hannibal, growling his way across the frame as the leader and mastermind, careful to protect his men. Cooper is impossibly perfect as Faceman, hitting the same handsome, smirking charm Benedict pulled of effortlessly, happily playing into the team spirit of the picture. Copley is an acceptable Murdock, nailing the pilot's mania and mischief, at times overplaying his hand to Carnahan's delight. Biel is believable as the sympathetic hunter, grinding her teeth well, while also making one hell of a fashion plate to bring some sex appeal to the table. Wilson is hammy as Lynch, eventually saddling up his own movie and riding off on a series of improvisations. He's funny, but unrestrained. My only real complaint is with Jackson, who's neither an actor nor Mr. T. -- not his fault, but the UFC fighter is a mumbler, which makes B.A. come off as a buffoon, not a threat. The script gifts the bruiser with the movie's only character arc, but Jackson can't carry it, deflating a few scenes with his mush-mouthed nonsense.

Tributes are here to enjoy, including a return of a classic GMC Vandura, but it's only offered a fleeting cameo. "The A-Team" dances on a fine line of homage and invention, but what Carnahan has created here should tickle fans and newcomers alike. It's fast, funny, and ripe with bullet hits, adding a nice kick to an anemic summer moviegoing season.