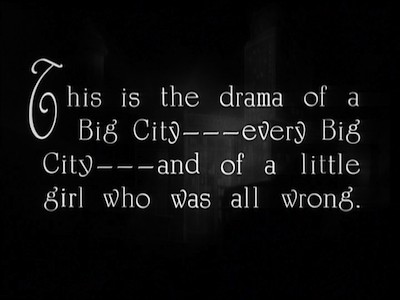 Long before Renee Zellweger was singing and dancing her way into an Oscar nomination, the character of Roxie Hart was scandalizing stage and screen alike with her delusions of fame and her way with a gun. The musical Chicago went all the way back to 1926 for its source material--a non-musical play by Maurine Watkins, who had been a journalist reporting on female murderers when she got the idea for her tale of tabloid journalism and Jazz Age virtue. A hit of its time, Chicago was ideal fodder for early Hollywood. Though most people might be more familiar with Ginger Rogers's 1942 bow as the homicidal flapper, Roxie Hart first sparkled on the silver screen in 1927 in a Cecil B. DeMille production. It's a film that was thought to be lost for a long time, until an intact print was found in DeMille's archives in 2006. Now, Flicker Alley has put together the two-disc Chicago: The 1927 Film Restored, and silent film fans can finally cast their eyes on the movie that started a tradition.

The story should be familiar to most filmgoers. The blonde seductress Roxie Hart, here played by Phyllis Haver, has been two-timing her good-natured husband Amos (Victor Varconi). Roxie is a true gold digger, and Amos's empty pockets don't turn the girl on any longer. She has been having an affair with a moneyed businessman, Rodney Casely (gravel-voiced character actor Eugene Pallette), and when Casely tries to drop her, Roxie shoots him. The district attorney (Walter Richmond) is more than ready to string the murderess up, but a reporter (T. Roy Barnes) sees a way to milk the case and sell some papers. He dubs Roxie "the Jazz Slayer" and plasters her pretty face on the front page. A celebrity is born!

Though there are some scenes with Roxie in the hoosegow, including a knock-down-drag-out catfight, this version of Chicago isn't as concerned with the jailhouse sirens as the more famous Broadway version. Velma Kelly appears briefly (depicted by Julian Faye), but once the lawyer William Flynn (Robert Edeson) enters the scene, Chicago becomes all about Roxie's trial. Flynn demands a steep fee, and Amos is forced to less-than-savory action to gather it. A big difference between this version of the movie and later incarnations is how much more of a participant Amos is. He is the closest we get to a sympathetic hero in the movie: he knows Roxie is a liar, he knows his love is wrong, but he is forced to stand by her. On the other hand, Roxie is not a very likable character. She's not even charming. The girl is rotten through and through. Which isn't to knock Haver, she's actually excellent playing the shallow schemer. So excellent, in fact, part of the fun of this early rendition is rooting for the temptress to get her just desserts.

The 1927 Chicago credits Frank Urson as the director, but it's well known that it was really a Cecil B. DeMille picture. The common belief is that since the mogul was still enjoying success with the religious-themed King of Kings, he didn't think it would be smart for audiences to also associate him with Chicago's scandal-sheet script. The movie is fairly frank in its references to adultery and corruption. Roxie spends a lot of time in her underclothes, and her belled garters are one of the prosecution's main pieces of evidence. Billy Flynn isn't just a charlatan lawyer, he's an honest-to-goodness shakedown artist. Sure, Hollywood gets its "crime doesn't pay" message across, but it's one that is tainted by genuine cynicism. Crime may not pay, but that doesn't mean you won't get away with it.

Chicago: The 1927 Film Restored is a light-hearted melodrama that remains fun to watch even 80 years later. It's more than a historical curio or an antiquated prototype for its more famous descendent; DeMille's production is stylishly ambitious and smartly constructed. This loose-limbed crime story is evidence of just how assured cinema had become prior to the advent of sound (The Jazz Singer premiered while Chicago was in production). While I wouldn't extend too much hyperbole or call Chicago a masterpiece, it's definitely a high watermark of popular entertainment and one that has happily been rescued from the vaults to get a second life in the digital age. I'm pleased to put it on my shelf right next to Rob Marshall's 2002 update, making a complete Chicago experience for my own viewing pleasure. 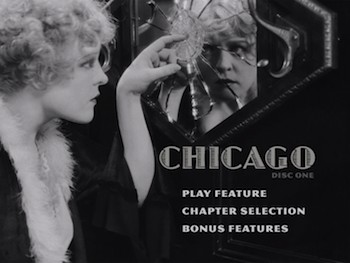 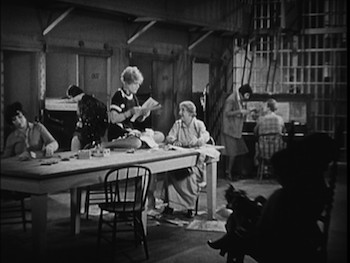 Video:
Flicker Alley's presentation of Chicago: The 1927 Film Restored is nothing short of miraculous. Mastered from an original nitrate print, the full-frame image transfer is gorgeous, with excellent resolution, a good balance in the black-and-white photography, and very little by way of damage. There are some occasional scratches on the film, but these are negligible; the studio has clearly gotten the best out their source. A movie this old and thought to be lost has no right to look so fresh.

Sound:
The soundtrack for Chicago: The 1927 Film Restored is mixed in stereo, and the musical score has been put together by Rodney Sauer and performed by the Mont Alto Motion Picture Orchestra. The music is very good and fits the movie well. Sauer takes cues from the onscreen action, including providing sound effects where it adds to the impact of the scene. The orchestral moods are always in sync with what is happening, but the music never overpowers the images.

The title cards look good and read well. The style is not too modern or obtrusive.

Extras:
The 1927 Chicago has been released by Flicker Alley as a two-disc set. It comes packaged in a clear plastic case, with a hinged second tray to make room for storing both discs. A 16-page interior booklet features photos, a critical essay on the film, an article about who really directed Chicago, plus credits and the like.

Bonus features on DVD 1 are mostly devoted to the promotional items for the movie and looking at the real-life story upon which it was based. There are two galleries, one for production stills and the other devoted to ads and other promotional pieces.

An 8-minute video essay, "The Real Roxie Hart," talks about the murder tales that inspired Maurine Watkins to write the stageplay version of Chicago, with articles Watkins wrote as a journalist being read over archival photos. There is also a DVD-ROM extra featuring Watkins' reportage. 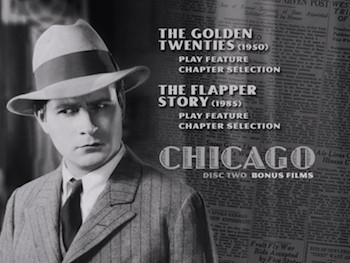 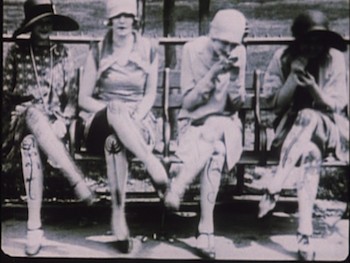 DVD 2 features two extra films, both of which provide additional background on the Jazz Age. First is an hour-long program from 1950 called The Golden Twenties. This is a compilation of March of Time newsreel footage, looking back at the decade through vintage reportage and a little hindsight.

The other feature is a 1985 documentary by Lauren Lazin called "The Flapper's Story." Running half an hour, it looks at fashion and attitudes that fueled the social phenomenon and how it impacted women's rights. Archival footage is rounded out with contemporary interviews with surviving flappers.

FINAL THOUGHTS:
Chicago: The 1927 Film Restored is Highly Recommended. Flicker Alley has done a tremendous job of bringing this lost classic to DVD and giving it an awesome presentation. The two-disc set fills out the experience with added content about the Jazz Age, but the real joy is in the fun rendition of Roxie Hart's dastardly deeds. Definitely worth a look for film fans who like silent pictures and devotees of the modern musical who want to know more about where the story came from. 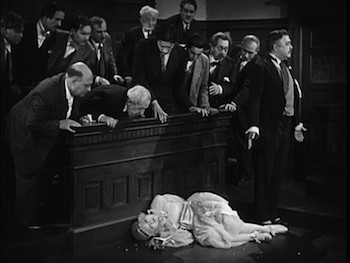 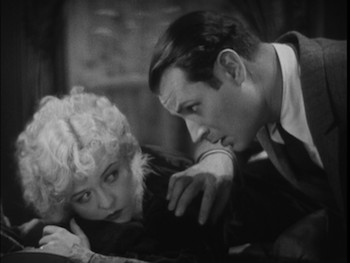