By contrast, the movie was positively cursed. Made by and starring most of the original Broadway cast it was, admittedly, a hard sell to mainstream moviegoers, but for two reasons having nothing at all to do with the film, which earned mostly positive reviews, The Pirates of Penzance's box-offices chances were doomed from the start. It didn't stand a chance, for reasons detailed below.

Fortunately, Universal's DVD - in 16:9 enhanced widescreen and Dolby Stereo - presents the film as few saw it even in 1983, and it's almost a revelation. 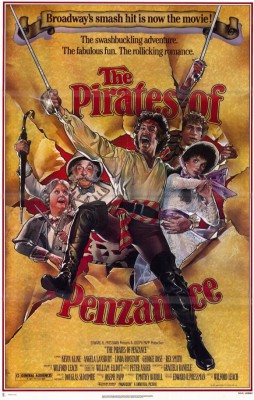 Set around 1880, the film opens as the Tarantula, a pirate ship (and an anachronistic, 18th century one at that), is spotted off the coast of Cornwall. Aboard the vessel, apprentice pirate Frederic (Rex Smith), having reached his 21st birthday and thus fulfilling the terms of his indentured servitude, prepares to take leave of his shipmates, including the lusty if dim-witted Pirate King (Kevin Kline). Frederic's middle-aged nursemaid, Ruth (Angela Lansbury), in love with the innocent, handsome Frederic, joins him ashore.

There, Frederic spies a gaggle of lovely maidens, daughters of Major-General Stanley (George Rose) and immediately realizes that for years plain Ruth deceived him about her supposed beauty. He immediately falls for virginal Mabel (Linda Rondstadt) but the Pirates appear, threatening to kidnap the daughters until the Major-General falsely claims to be an orphan, the soft-hearted pirates' Achilles' heel, leaving them no choice but to release the Major-General and his family.

But then the Pirate King and Ruth scheme to lure Frederic back into their fold. They discover he was born on February 29th - Leap Year - and that under the terms of his contract he's bound to them until his 21st birthday, in the year 1940!

The Pirates of Penzance was such an unexpected success on Broadway that its cast even turned up one week on Saturday Night Live as that show's special musical guests. As a viable genre the movie musical had gone the way of the dinosaur by 1983, but a filmed record of the Broadway show, produced on a limited budget, probably seemed like a reasonable gamble. Instead of trying to "open it up" like the epic roadshows of filmed Broadway musicals back in the '50s and '60s had done, The Pirates of Penzance for both budgetary and aesthetic reasons cleverly embraced its very theatricality.

Much like The Wizard of Oz, the art direction (by Elliot Scott) is dominated by thoroughly unreal painted backdrops and forced-perspective sets. (One of the pirates also has an obviously stuffed parrot strapped to his shoulder.) The broadness of the comedy in the stage version, further heightened from more traditional productions (which were, mind you, already comedies; the songs themselves parody Verdi and other composers), is retained for the film. In the Broadway and London productions*, there was even some interaction between the pirates and the orchestra, including a brief duel between the Pirate King and the show's conductor, the latter using his baton as a sword. In the movie, the final showdown between the pirates and the local constabulary spills over into a theater staging a local production of (Gilbert & Sullivan's) H.M.S. Pinafore, logically permitting some of this same interaction.

Unfortunately, the movie's chances for success were utterly doomed by outside forces. First, the popularity of the Broadway show inspired a rival film production, The Pirate Movie, a much freer adaptation of The Pirates of Penzance reconfigured as a teenage romantic comedy, but clearly and predominately designed to cash in on the Broadway show's popularity. Quickly made in order to beat the film of The Pirates of Penzance into movie theaters, it was released first (in August 1982) and received almost unanimously terrible reviews.

If that weren't bad enough, further thwarting the film's chances was Universal's perverse decision to release the film to theaters and pay TV (specifically SelecTV) simultaneously. This prompted a boycott by theater owners; reportedly the film played first-run on just 92 screens nationwide, and lesser houses at that. Meanwhile, though filmed in anamorphic Panavision and mixed for Dolby Stereo, the pay TV release was panned-and-scanned and monophonic (stereophonic television wasn't widely adopted until 1985-87).

All this is a terrible shame because the movie is as enormously charming as the original stage production. Beyond the timeless, still-dazzling, dizzying music with its ingenious lyrics, patter, and lushly romantic melodies, here sprightly orchestrated with the same energy as Kline's swashbuckling pirate, is the show's perfectly balanced tone. It's not exactly camp - there's too much obvious affection for the material - but rather it acknowledges its Victorian qualities and staginess by committing to it and acknowledging it head-on, especially in the performances. Kline particularly, in what for him was a star-making performance, recalls not so much the pirates of Errol Flynn and Tyrone Power but rather Burt Lancaster's Captain Vallo in the similarly spirited send-up The Crimson Pirate (1952). (Kline's later, equally memorable idiot criminal mastermind in A Fish Called Wanda is cut from the same cloth.)

The rest of the ensemble cast fare equally well. The casting of singer-teen idol Rex Smith and singer-songwriter Linda Rondstadt was particularly ingenious. Both sing marvelously, while Rondstadt's features and makeup suggest the general period quite well: she resembles a star of the early silent era of motion pictures, circa 1910. Lansbury, replacing Estelle Parsons from the Broadway version (Marty888 helpfully adds, "Patricia Routledge [first played the role] when the show originated as a free presentation of the Public Theater at NYC's Delacorte Theater"), was brought in for star power, I guess, and she's fine, though Rose's Major-General, a broad caricature, and Tony Azito's marionette-like dancing as the leader of the Keystone Kops-like police force are more memorable. (Near the end, Azito does an incredible pratfall that would have made Buster Keaton proud.)

The film gets off to a good start, establishing its deliberately stagy look with an overture that's accompanied by a shot of a proscenium arch, and as the film opens revives Universal's earliest sound era logo (the plane encircling the glove) - and in 'scope, yet!

Other than some age-related color flashing, the 16:9 enhanced Pirates of Penzance looks fantastic. I'd seen the film only once before, on one of those early pay-TV airings, where the poor panning-and-scanning made the production look cheap, even amateurish. In its original aspect ratio, DP Douglas Slocombe's widescreen cinematography can be appreciated at long last. He and director Wilford Leach (also of the Broadway production) use every square millimeter of the 2.35:1 frame, making this an absolute must in widescreen. Also adding considerably to the film's effectiveness is its excellent, fully directional 2.0 Dolby Stereo score, which sounds great. Good, sing-a-long optional English SDH subtitles are included.

The only supplement bills itself as a trailer, but it's certainly not that; I'm not sure what it is. In stark black and white throughout (like a damaged nitrate print from 1902) narration accompanies seemingly randomly selected scenes, but there's no title elements and just what this is remains a mystery.

With movie musicals now almost back in vogue - at least they were a few years ago - watching The Pirates of Penzance I kept wishing someone at Universal thought to re-release this on a limited basis, perhaps to art houses looking for something offbeat. It may very well be the best movie musical of the 1980s (there are few contenders, Little Shop of Horrors maybe?) and deserves a second chance. As a near-perfect record of an outstanding Broadway production, this rates a DVD Talk Collector Series title.

* This reviewer saw the London production, with Tim Curry as the Pirate King and George Cole as the Major-General, in the summer of 1982. Richard Pryor sat in front of me that evening, and in researching this review I discovered why he attended that particular performance. In town shooting Superman III, Pryor was there to support two of his co-stars from that film, Pamela Stephenson and Annie Ross, who were playing Mabel and Ruth, respectively.