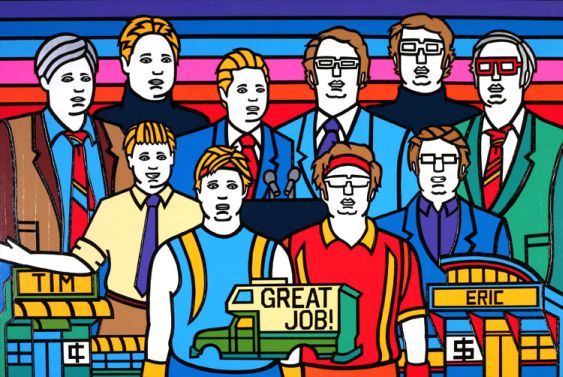 Tim Heidecker and Eric Wareheim's hugely experimental and even avant garde comedy series has now ended after five seasons, which means at least we have another DVD release to look forward to next year, in addition to this fall's forthcoming "Chrimbus Special," a one-hour show set to air on Adult Swim in December. This fairly limited run is probably a good thing, as is the show's short, fifteen-minute format. For me, Tim and Eric never overstayed their welcome or were anything like tiresome; but the show's length helped prevent that. The duo's abstract, crude, juvenile, improvisational, intuitive comedy can verge on the grating, but the potential for irritation is also a part of their style and is an important element of their satirical point of view. The source of much of Tim and Eric's comedy comes from television itself. They satirize the conventions of commercials, music videos, situation comedies, instructional videos, and even improvisational comedy. Tim and Eric love to linger upon the most debasing, awkward, artificial, and otherwise uncomfortable moments that these forms of "entertainment" have to offer, and while lingering there, they add their own flavor of horror: David Lynch-inspired sound effects, rapidly inter-cut images, and alarmingly Photoshopped imagery such as a pig's face or another person's eyes grafted to a character's face.

Tim and Eric embrace the horrific in a way that, while often funny, also gets right to the point of their real interest: the shame caused by television, or maybe mass media as a whole. Not to get too academic here, but Tim and Eric themselves walk a fine but interesting line with regard to this shame. Take a look at their frequent co-stars, David Liebe Hart, James Quall, and the late Richard Dunn, among many others. These three performers have sketchy backgrounds in public access television of the very sort that most interests Tim and Eric; while each of them is clearly not a trained or talented performer in a conventional sense, they also relish being in front of the camera, even if it is for all the wrong reasons. The mixture of perverse fascination and exploitation that comes with these co-stars' appearances is an inherent and troubling part of Tim and Eric's overall concept for the show: a tour of television as a vehicle for debasement.

This disc, which collects all ten episodes of the show's fourth season, showcases Tim and Eric in top form. I felt that the third season suffered a little from repetition and slowness, but each episode of the fourth is a well-crafted miniature. Tommy Wiseau, creator of the notorious The Room, "guest directs" a memorable episode. John C. Reilly returns as Dr. Steve Brule. "The Universe" has Tim and Eric as talking-head astronomers who know nothing about the cosmos, ending with a fantastic monologue by Eric's character ("I do this every night with your son"). Josh Groban sings the songs of Casey and His Brother. Peter Stormare is perfectly cast as the spokesman for the Cinco Boy. The Cinco D-Pants ("D" for diarrhea) are a bit much, and the Brule segment on the human body doesn't work, but these are rare misses in a creative, strong season.

Tim and Eric Awesome Show, Great Job! is one of the most unique comedy programs ever broadcast on mainstream television. I love it because it feels like the product of minds unfettered by concern over convention, format, propriety, narrative, or political correctness. This kind of freedom holds the potential for formless disaster, of course, but Tim and Eric have disciplined, sharp minds and their comedy, for all of its graphic crassness, is the product of a very particular and committed point of view married to a perfectly appropriate batch of creative tactics.

Image
The full-screen image looks very much like prior TAEASGJ! releases. Colors are bright, with strong contrast. Detail is sharp, with the notable exception of the many scenes that are made to look like vintage TV broadcasts or VHS tape, all of which carry an enviably authentic feel. (I've always wondered if any of these sequences are shot on antique equipment, or if their look is entirely achieved with post-production effects.)

Sound
The surround soundtrack is good, with the show's aggressive, active, strange soundscape given a broad aural canvas. Sound effects are plentiful, even though the sound design isn't arranged in traditional terms with regard to directionality. But TAEASGJ! is nonetheless the one of the most sonically involved programs in recent memory, what with all the moist, squishy, gushy noises, vibrant music, and distorted droning groans.

Bonus Content
As with the show's prior DVD releases, there is a good dose of bonus content, mostly consisting of excised material, some behind the scenes footage, and clips from the duo's live performances. In the category of excised material, there are Deleted Scenes (12:31), Extended Scenes (12:57), and Bloopers (4:42). Behind the scenes footage includes Restaurant Fart (0:54), The Cast of "Tennis" (1:43), "Road Trip" Dummy (2:10), and Zillionaire (1:03). There's also a clip of Pusswhip Banggang performing "Brownie Mountain" in concert (4:59), and a highlights reel from AwesomeCon 2009 (3:51). Finally, a karaoke feature provides a selection of songs from the season, sing-along style.

The core concepts behind Tim and Eric Awesome Show, Great Job! hold up well throughout its fourth season. The series was an endlessly forward-looking mixture of intuitive, experimental technique and highly abstracted comedy that remains without peer. DVD Talk Collector Series.

(Note: The image above is by Jason F., who works in acrylics and whose fine work is available here.)