Lionsgate Home Entertainment // Unrated // July 20, 2010
List Price: $14.98 [Buy now and save at Amazon]
Review by Stuart Galbraith IV | posted July 3, 2010 | E-mail the Author
Few things are as enjoyable as stumbling across a film you've barely heard of before, a film where you know nothing about its story or characters ... and it takes you by complete surprise. That was my reaction to The Professional (Le Professionnel, 1981), a violent, clever, funny, and very sexy French spy thriller starring the great Jean-Paul Belmondo. It just dazzles.

Based on Patrick Alexander's novel Death of a Thin-Skinned Animal, the picture was a huge hit in Europe but either had an extremely limited release in the United States or perhaps no release at all. Like many, I suspect, my familiarity with the film was limited to Ennio Morricone's score, particularly his famous "Chi Mai" theme, which is repeated in the movie as frequently as "Do Not Forsake Me, Oh My Darlin'" is in High Noon. Lionsgate's DVD is short on extras but the 16:9 enhanced transfer is superb. 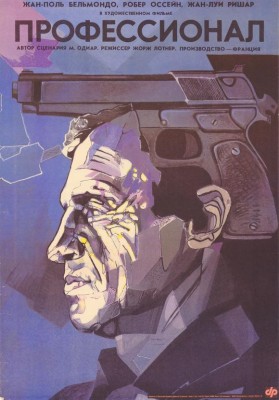 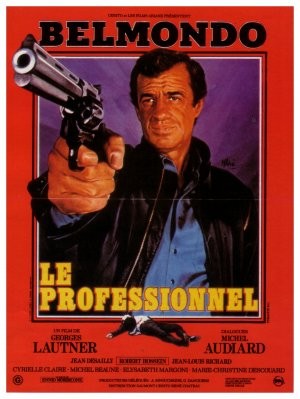 Following visually interesting main titles in the spirit of Maurice Binder (but stylistically different), the story opens in the kangaroo federal court of Malagawi, a fictional African country, and obviously also a former French colony. (Unlike most thrillers set in fictional African nations, this one is entirely believable.) French secret agent Josselin "Joss" Beaumont (Belmondo) is on trial after attempting to assassinate Idi Amin-esque President Njala (Pierre Saintons). Doped up during the trial, Beaumont is quickly convicted and begins a life sentence of hard labor.

Beaumont eventually escapes and two years later returns to Paris - the very week Njala is due for a state visit. But Beaumont's former colleagues aren't too happy to hear the news. After ordering him to Malagawi, the political winds abruptly shifted and the French government decided they needed the ruthless military dictator after all: Beaumont's own people helped facilitate his capture. "We sold him out," complains one colleague. "No," says another, "We gave him away." Later on the reason is subtly revealed: Njala's in town to negotiate French access to Malagawi's oil reserves in exchange for nuclear technology.

The at times ingenious script by Michel Audiard and director Georges Lautner carefully sets up parallel stories that come together for the exciting climax: Beaumont's determination to carry out the assassination of Njala while avoiding his own agency's efforts to bring him in and perhaps kill him. His pursuers include world-weary one-time friend Valeras (Michel Beaune), mistress Alice Ancelin (Cyrielle Clair), and ruthless Inspector Rosen (Robert Hossein), who's like Tatsuya Nakadai's saucer-eyed psychopath up against Toshiro Mifune's yojimbo.

From beginning to end, The Professional infuses familiar situations in a genre all but dead by 1981 with great style and enormously satisfying inventiveness. More Harry Palmer than James Bond, the film is deeply cynical about the spy game, even more so than famous examples such as The Ipcress File and The Spy Who Came in From the Cold.

While I never actually disliked Belmondo I wasn't particularly a fan, either. But here he positively oozes with charisma and charm. Despite all that has happened to Beaumont he retains a delicate balance of steely-eyed determination, a sardonic sense of humor, and a devilish charm that only Sean Connery and Patrick MacGoohan ever pulled off so completely in such roles. Though nearly 50, he's likewise excellent in the film's many brutal fight scenes, and in a brief but harrowing Bullitt-style car chase through the streets of Paris, Belmondo is clearly behind the wheel most of the time.

Slickly directed by Lautner (La maison assassinée), The Professional is also extremely sexy. Elisabeth Margoni co-stars as Jeanne, Beaumont's devoted wife while Clair plays his ex-colleague and not-so-secret lover; Belmondo finds time to bed them both. Additionally, Marie-Christian Descourard is fetching as Njala's mistress. The sexual interactions in the film are refreshingly adult, a contrast to the silly coyness of the concurrent Roger Moore Bonds.

Presented in its original 1.66:1 aspect ratio with 16:9 enhancement, The Professional looks outstanding, showing off its slick cinematography (by Henri Decaë of The 400 Blows, Purple Noon, etc.) to excellent advantage. The image is very sharp with excellent color and strong blacks. There are 2.0 Dolby Digital mono tracks in English and French, though I can't imagine anyone preferring to watch this dubbed. Optional English and Spanish subtitles are included.

The lone extra is a 16:9 enhanced French trailer that unfortunately makes the film seem much more ordinary than it is. It must have been prepared after Morricone was hired but before he'd written his score, as the trailer includes his title theme from Il Gatto (1977) instead of "Chi Mai."

I thought I had pretty much exhausted the spy movie genre but The Professional came as a delightful surprise, a film that would easily make my All-Time Top 20, maybe my Top 10 of films of its type. The dearth of extras is disappointing but the terrific transfer compensates that. A DVD Talk Collector Series Title.