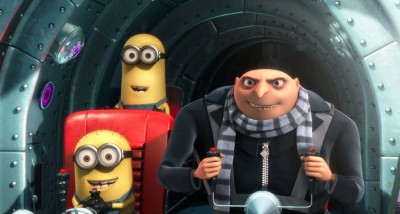 Universal Studios adds their great CG-animated hope to the summer moviegoing sweepstakes with the bouncy "Despicable Me." A full-blooded cartoon in a genre that is typically bombarded with overt sentimentality, the picture is a mixed bag, missing bellylaughs despite rather aggressive attempts at humor, yet highlighting an intriguingly playful voice cast, who eschew their normal, moneymaking tones to match the film's colorful world of supervillains and henchmen.

Gru (voiced by Steve Carell) considers himself to be the world's premiere supervillian, but a recent theft of Egyptian pyramids by an unknown mastermind has left him lacking in the amazement department. Planning to steal the moon with the help of his tiny yellow minions, Gru needs two things: a loan from the local bank and a shrinking ray. Currently holding the miniaturizing weapon is Vector (Jason Segel), a rival with better equipment, forcing Gru to hit him in his weak spot: fundraising cookies. Taking drastic measures, Gru adopts three adorable orphans (including Miranda Cosgrove) to help him infiltrate Vector's lair, but soon finds himself enjoying the fatherly lifestyle, which quickly diverts his attention from the master plan, much to the dismay of Gru's gadget whiz, Dr. Nefario (Russell Brand). 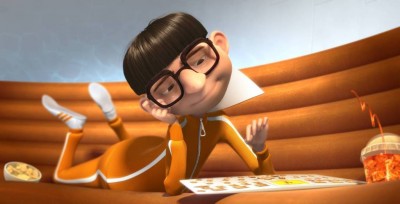 "Despicable Me" has a surplus of energy, which normally wouldn't be such a troubling development, yet, in the hands of the directing team (Pierre Coffin and Chris Renaud), the manic movement of the movie grates quickly. Attempting to mount a slapstick comedy with broad colors and a squealing, unpleasant score from Hans Zimmer (a rare miss for the master of movie music), the picture pushes the pedal to the metal, hurriedly filling Gru's world with massive ships, a sea of puckish minions, and wild assortment of gadgets and weapons to carry out his sneaky plans. Trouble is, there are a shockingly limited number of laughs, even with a gifted set of comedians populating this universe. "Despicable Me" is more in the mood to pound than tickle, which limits the appeal of the picture to younger audiences.

Interestingly, the voice cast attempts to make a different impression than what's typically required for a colossal animated release. Brand is basically unrecognizable as Nefario, swallowing his typical swagger to portray a man of science; Segel clips his voice to nerdify Vector, making the character not only a nuisance, but a bit of a twerp; and Carell takes on a Bela Lugosi accent for Gru, dialing down his traditional audio pop to create a character, not just an animated clone. The efforts are commendable and often wonderful, giving "Despicable Me" something to savor when the directors turn to fart jokes and testicular trauma for laughs. 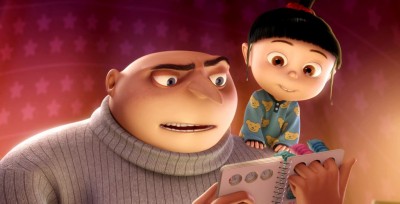 Speaking of desperate laughs, the minions are a noisy addition to the film, trying to sustain the picture's slapstick tone as these little yellow creatures bop around the frame, helping Gru with his bad guy business, but also making time for slap fights and trips to the copy machine (to photocopy their little yellow rear ends), coming off less like useful comic relief and more like a potential merchandising bonanza.

"Despicable Me" actually improves as it zeros in on a finale, finding a more fruitful tone as a supervillian caper, with Gru and his beloved children caught up with Vector over the fate of the moon. The action (boosted vividly in 3-D) is full-scale and suspenseful, paying off characterization cleanly while giving the audience a smooth ride of thrills for the closer. For a film that opens with a tiresome, clichéd first half, it's a treat to watch the movie transform into something likable and exciting. Perhaps too little too late, but at least the filmmakers ultimately catch on to what's best for their feature.