I don't know why I gravitated to Jimi Hendrix' music growing up, but the guy was doing things with the guitar that I'd never seen before. I bought all the tapes I could find, I watched as much footage of him growing up that I could, and even had a picture of him on my jean jacket growing up (which I hope doesn't date me). Despite his life being cut short tragically, he still remains a touchstone for inspiration among many in the rock world, and a documentary of Hendrix titled The Guitar Hero, released around the 40th anniversary of his death, tries to bring a degree of intimacy to Hendrix, his talents and accomplishments. 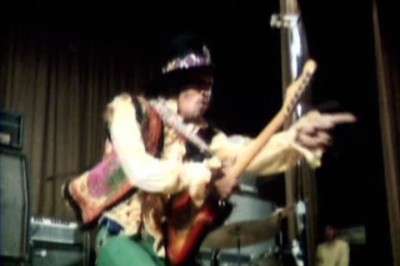 For those unfamiliar with Hendrix, not only should you feel shame, but also as a black rock guitarist in the late '60s he was a bit of an anomaly on both counts. A former soldier in the 101st Airborne, he found himself discharged and took up playing the guitar, and found himself performing in bands to support R&B performers such as Little Richard and the Isley Brothers, to name a few. He had larger dreams of stardom and decided to take his guitar playing to England, and quickly found himself earning the respect of musicians like Eric Clapton, Keith Richards and Paul McCartney themselves a veritable treble of music forces in their own right.

It wasn't that Hendrix was a charmer (though he was), but his ability in playing the guitar wowed those mentioned, along with countless others. He was his own game-changer, allowing things like feedback and effects to be part of the noise, their own voice if you will. His style of playing (sometimes behind his back, sometimes with his teeth) helped elevate the lead guitarist to another level of charisma. Clapton and Richards liked to play and in Richards' case liked to show off; Hendrix' stage presence was a mix of wonder, fascination and sexual energy that went beyond showmanship. There was a visceral, palpable feeling in his performances. Covering songs from Bob Dylan and the Animals along with a mix of his own material and modernizing some blues songs, his first album "Are You Experienced" served as a pronouncement that Jimi Hendrix was here.

For whatever reason that pronouncement didn't click in America, so Jimi had to return to his home country to win the music faithful here. And at 1967's Monterey Pop Festival next to acts like The Who, Janis Joplin and the Mamas and the Papas, Hendrix was the name that everyone remembered, with a performance that wowed the crowd and culminated in him setting his guitar and fire and destroying his equipment. Following the release of two more albums and an appearance at Woodstock, Hendrix died in September of 1970 from an accidental overdose of sleeping pills. 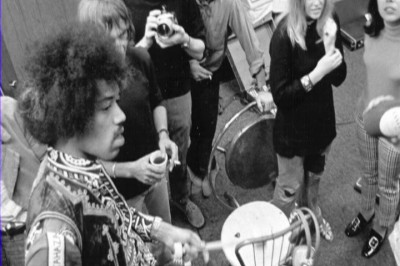 In The Guitar Hero, producer and director Jon Brewer interviews peers of Hendrix during that time, including the Animals' Eric Burdon and Traffic's Dave Mason. Clapton even gets an interview in there, along with Cream band mate Ginger Baker and Stephen Stills of Crosby, Stills and Nash. Lemmy from the band Motorhead (who served as Jimi's roadie) even shares his thoughts, as they all do, of the man on and off the stage. The feature claims on the cover to be narrated by Slash, but it's really just the Guns N' Roses/Velvet Revolver guitarist sharing this thoughts on what made Hendrix so good from a younger man's perspective.

Sadly though, one of the things this documentary lacks is more of that perspective. As the musical landscape gets wider, the influence that Hendrix has on it gets further in the rear view mirror. Honestly if Slash is the only guy under 50 that Brewer could find for this, the idea for this documentary seems out of place. The 1973 documentary which includes interviews with Clapton, Richards, Townsend and members of Hendrix' family, and serves to be better and more entertaining, if for nothing else because some of the subjects remember a helluva lot more about the man then than they do know.

The second thing The Guitar Hero lacks is well, footage of Hendrix on stage, and that's a biggie. The Monterey and Woodstock performance footage is scant, and what little is here isn't used as effectively as it should. You only get brief glimpses rather than an extensive picture, and the film's 100 minutes are dominated by interview subjects. And it makes for depressed viewing. Not for nothing, but if I wanted to see a bunch of people talk about someone who died, I'd go to a funeral service. Something tells me that the Hendrix estate didn't cooperate too much with this, and the result is this film, this muddled mess that's supposed to serve as a tribute to one of the best rock guitarists in history.


The Guitar Hero is presented in 1.78:1 anamorphic widescreen and handles the current interview footage and vintage film equally well. The image is replicated accurately and there's little sign of edge enhancement or artifacts. It makes for appealing and interesting viewing.


The Dolby Digital two-channel stereo track is okay, but let's get one thing out of the way. As a conscious decision, or even a moral one, Jimi's music, be it complete songs or clips pulled into a feature, should be in 5.1 sound. When the feature is underwhelming, neutering the music didn't help that much. But still, two channels, all in front, sounds decent, if a little on the weak side.


The biggest (and pretty much only) supplement is the additional footage of Hendrix. There's a silent reel (10:47) that includes the Monkees (whom Hendrix opened for at one point) cavorting around America on their tour, though you'd be hard pressed to spot Jimi in this film. The Experience plays "Hey Joe" (3:30). I've seen the film before and liked it, and liked seeing it again here. Extended interviews with Mason, Stills and others follow, and two stills galleries complete things.


The Guitar Hero could have been a decent idea and serve to mark the anniversary of Jimi Hendrix' passing warmly, but with so little participation in the film from the family (aside from interview footage with younger brother Leon, who was excised from the estate my Jimi's father), it feels like more of a cash grab than anything. If you're interested about this rock guitarist, it's best to check out some of the other tribute docs out there instead.