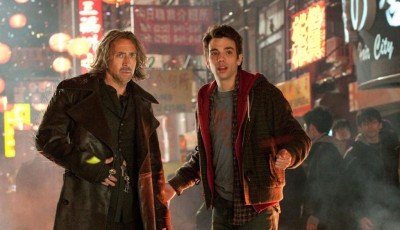 I'm starting to believe there's a massive steel machine in super-producer Jerry Bruckheimer's office, and, when he makes a movie, he feeds the pleasing results into the furious engine, which then takes whatever clicks wonderfully about the film and smashes it to pieces. "The Sorcerer's Apprentice" began life as a riff on the iconic Mickey Mouse segment of "Fantasia," but what's onscreen isn't nearly as inviting or whimsical as the animated short. Instead, the feature is a winded stunt show, brought to its knees by overcooked writing and insistently fruitless attempts at comedy. Once again, Bruckheimer's contraption takes a pure idea for adventure and kills the enjoyment by overthinking matters to a paralyzing degree.

Balthazar Blake (Nicolas Cage) is a wise sorcerer who's worked for a thousand years to keep his wicked compatriot, Maxim Horvath (Alfred Molina), in check, with the help of his loved one, Veronica (Monica Bellucci). Questing to find the prophetical chosen one that will bring balance to the magical realm, Balthazar meets Dave (Jay Baruchel), a geeky physics master with the hots for his school pal, Becky (Theresa Palmer). Taking the anxious boy wonder into perilous sorcerer training, problems arise when Horvath escapes his magical prison, ready to destroy Balthazar and clear a pathway for all-powerful witch Morgana (Alice Krige) to summon the armies of the dead and destroy the world. 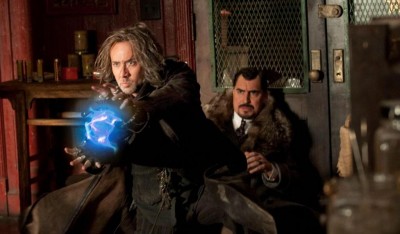 The trouble with "Sorcerer's Apprentice" is that it hungers to be taken seriously as a major summer event movie. Not content to play a batty magical premise simply to supply a fleeting thrill ride, Bruckheimer and "National Treasure" director Jon Turteltaub want to inflate the picture to a point of explosion: shaping an epic tale of Merlin's fallen students and a thousand-year quest to restore order to the galaxy, along the way detailing prisons made of Russian nesting dolls, a silver dragon ring of unspecified power, Morgana's iffy plan of worldwide domination, and a heaping helping of the lovesick blues, as Dave stumbles over himself to catch Becky's eye.

Turteltaub fails to connect the dots in a buoyant fashion, though the film does receive an A for effort when it comes to the action sequences, which pit sorcerer vs. sorcerer in the middle of colorful NYC geography. The spectacle is well maintained, captured especially well during a Chinatown parade battle where Dave finds a full appreciation for the necromantic trouble he's in. The production achieves the scope of the sorcerer's world, but rarely does the film find a consistent pace, with Bruckheimer pushing matters along with a fair amount of shrill noise to keep the picture alert. Despite a screen teeming with magical happenings, the screenplay doesn't trust the inherent awe of this wizarding world. Instead, there's a litany of useless business and overemphasized fantasy vocabulary to gum up the works, making the picture come off labored and, more surprisingly, joyless. 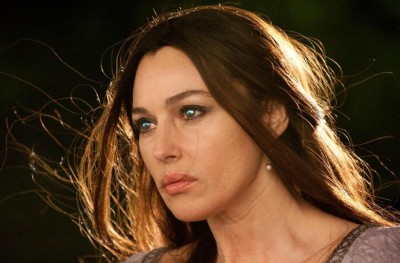 Not easing the strain is Baruchel, who really slops on his affected geek persona that's served him well during his career. It's a major exaggeration, used to portray Dave's nerdly self, but makes the character look disturbingly incompetent, even in his eventual hero mode. Baruchel is a fine actor, but he's been plucking this single string of buffoonery for far too long. The performance lacks a fine edge of amazement, trying much too hard to sell awe instead of embracing it. The performance is also free of laughs, but so is the rest of the picture, despite some pronounced comedic efforts. Also sinful is how little Bellucci factors into the story, wasting her talents on a throwaway role with barely any lines. Honestly, who makes the effort to hire Bellucci only to toss her into the background? Shameful.

Because climaxes are always big and boomy in Bruckheimer country, "Sorcerer's Apprentice" settles in for a massive showdown that, once again, is more bark than bite. While technically sound and occasionally tempting, this is not a jubilant celebration of mysticism and personal growth. The constant busywork wears the entertainment factor down, leaving the "Sorcerer's Apprentice" more about poses and dismal one-liners than actual magic.