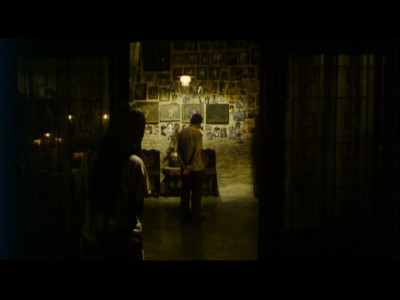 The Photograph is a beautifully crafted and intelligent film about the special bond that can be created between two people. The story centers around two characters you would never expect to connect under normal circumstances, and yet somehow they manage to create a genuine friendship that helps them to grasp a better understanding of not only their own selves but of each other.

The film begins by introducing us to Sita (Shanty), a young woman that is struggling to provide financial support to her family. She seems especially determined to be able to provide for her own child, whom she rarely gets to see.  Sita is working as a prostitute and as a singer at a bar to try and earn enough wages. Yet even with prostituting herself she doesn't have enough earnings to really provide for her family as needed. Her pimp certainly doesn't make things any easier by harassing her for money (and one might presume she already gave him his 'share' anyway). 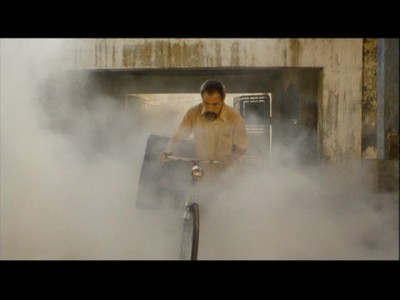 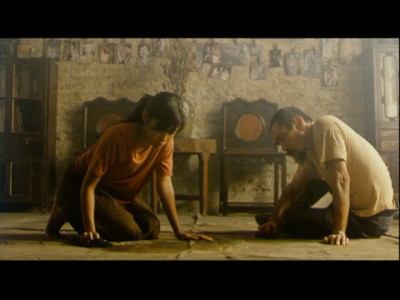 Mr. Johan (Kay Tong Lim) is a photographer whose specialty lies in creating portraits. By all appearances he is a gentle older man, and his heath is on the decline. Sita is aware that he has a room available that would be perfect for her to rent and she manages to convince him that she should be able to do just that. She does indeed end up with the room. Mr. Johan is looking for an apprentice to continue his work as a photographer before dying, and he ends up enlisting Sita to help him find that person. The bulk of the film is spent on these two out of the ordinary characters as they form a bond working together as an effort to find someone (anyone?) who can serve as a apprentice photographer to Mr. Johan.

The acting seems quietly reserved and natural for the most part. Many sequences in the film would likely register as entirely flat if it were not for the impressive performances by both Shanty and Kay Tong Lim. There are several individual moments where even the most subtle of facial expressions lend deeper meaning to these characters, and it improves upon the film when it occasionally seems to falter with an underdeveloped screenplay.

Writer/Director Nan Achanas provides a graceful sense of style to the film by providing it with much visual splendor that carries it to a powerful and resonant ending that left me with chills and a sense of wonder. 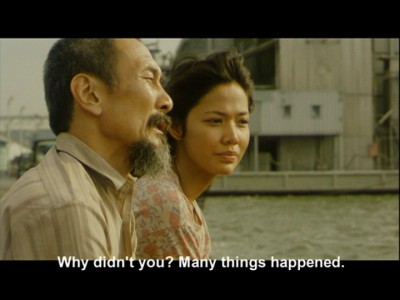 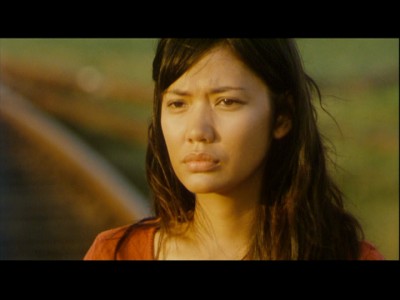 Good grief. The picture quality is non-anamorphic 1:85:1. The film has slightly distracting wavy lines on both sides of the picture on rare occasion (mainy at the beginning -- clearly from a poor transfer of the film) and the overall PQ is quite murky; without very strong color reproduction. Part of this may be the cinematography - and yet I wouldn't be surprised if the film would look less drab if it had a better transfer. The English subtitles were also a mess to behold. Grammatical and spelling errors were bountiful. The type of font used would bizarrely change from one moment to another in various scenes. Sometimes the font looked bolded - at other times it looked like a different style altogether. To make matters worse the translation would sometimes group what is being said (where even one line of translation might represent what is being said by two characters). I have taken some screen-grabs (which are featured throughout the review) to try and highlight these unfortunate issues. 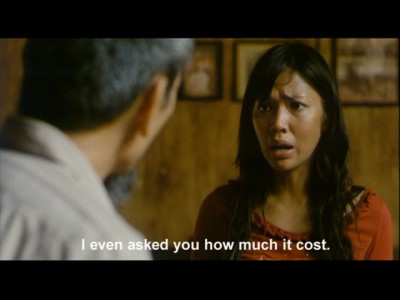 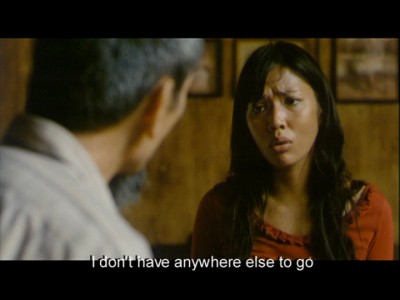 The audio fares somewhat better -- even if mainly just because it would be hard to mess up something such as 'subtitles' with an audio track. The 2.0 stereo audio is serviceable. The film is only a few years old but it doesn't sound very dynamic. There isn't a lot of interesting activity in the sound. The film mainly manages to reproduce clear dialogue and music which sometimes becomes featured prominently. The score is very melodic and soothing - it has a quiet grace just like the rest of the film.

No substantial extras are provided. When viewing the film in a normal DVD player some pictures are provided along with the titles of other Global Lens Collection releases.

Upon inserting the release into a DVD-ROM drive and opening the Drive folder a Discussion Guide can be found with a mini-biography on the director, film notes, and information about Indonesia. The disappointing thing to discover is that it appears no quality control was put in place for this inclusion. The PDF file contains several user comments on the right-side of the document that appear to reflect changes that were made or should have been made. This appears to have been a document made by interns with supervisors doing revisions that were never fully completed before the disc was ready for retail.  This is a shame and dishonor to the film.

Directed by Nan Achnas, The Photograph is an Indonesian film from 2007 that has finally made a debut for North American audiences with this 2010 DVD release.  While the film itself is a powerfully resonant work of art this DVD release is a bit of a mess. It is hard to recommend purchasing this release when it appears little effort was put into helping the film find an audience. Rent it first to see if it fits your taste, and then make a purchase decision accordingly (if you can look past the disc's many flaws). Rent It.