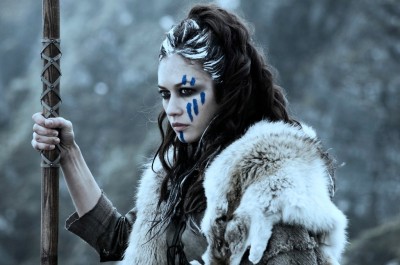 After 2008's "Doomsday," I lost faith in writer/director Neil Marshall, who torched all the promise generated by 2005's "The Descent" to make a tuneless, odious John Carpenter wank that thankfully few seemed interested in. "Centurion" returns the filmmaker to an intriguing gallop, taking on the challenge of a historical actioner, following battered Roman soldiers as they march into Hell. This being Marshall, a nimble foray into brawn isn't to be expected; instead the filmmaker floods the film with blood and growls, creating a mighty clang of history and gore. It's Herschell Gordon Lewis's "I, Claudius."

As Rome attempts to conquer Europe in the 2nd century, their efforts are forcefully rebuffed by the Picts, a tribal nation out to defend their Northern Britain territory. Into the fray goes soldier Quintus Dias (Michael Fassbender, "Inglourious Basterds"), a centurion who's escaped enemy capture, only to find himself marched back into duty when General Titus (Dominic West) is ordered to plunge further into Pict control. Again beaten by the natives, Dias and a small band of survivors (including David Morrissey and Liam Cunningham) flee, forced to endure brutal environments and the concentrated efforts of an unstoppable, mute Pict tracker named Etain (an aptly cast Olga Kurylenko, "Quantum of Solace"), fighting their way back to the safety of the Roman army. 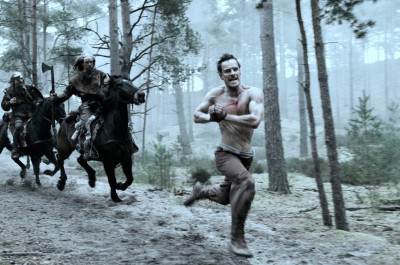 "Centurion" is a rough and ready film, playing to Marshall's strengths as a visual composer and closet sadist. It's a film better seen than heard, with gorgeous widescreen cinematography from Sam McCurdy expressing a forbidding land of dense forests and snowbound mountaintops, creating an obstacle course for the Romans that challenge their survival instinct at every turn. It's a compelling land of mystery ruled by an ill-defined tribe of painted natives who've committed their lives to spilling Roman blood. Now there's a movie.

For the first act, "Centurion" tears off as a chase and revenge picture, barreling through a series of skirmishes that splatter the screen. Marshall loves the wet red, and he gives in to the temptation here, depicting the battle between the Romans and the Picts with head-chopping, wound-spurting accuracy, turning the battlefield into an escalating parade of horrifying body trauma, though most of the carnage is criminally cartooned by terrible GC-enhanced blood. "Centurion" is vicious and primal, but pleasingly so, allowing Marshall to create a film of spittle-drenched fury, which helps to reinforce the need for the Romans to find a safe haven, despite the fact that they are actually the villains of the story. It's an energized piece of direction from Marshall, but it doesn't last forever. 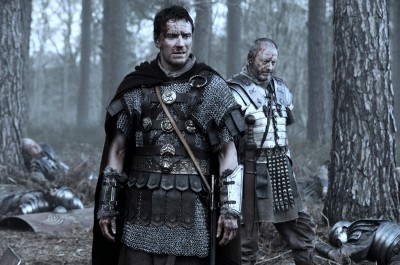 "Centurion" slows some as it regroups in the midsection, suddenly realizing an emotional core wouldn't hurt matters. Enter Arianne (Imogen Poots), a dewy Pict exile who comes to the aid of the wounded soldiers, showing reassuring distaste for the tribe which invites warmth into Dias's cold heart. The character's introduction comes far too late in the picture to matter, only halting the action needlessly as Marshall clumsily scripts up a heart. It's an accomplished, vivid ensemble, but they're better left with minor dramatic beats than useless melodramatic ones.

"Centurion" gets back to the business of cracking skulls for a grisly finale, but the air has been let out of its tires. Instead of reaching unimaginable heights of neck-snapping exhilaration, the picture limps to a finale, which, once again, betrays the fierce tone of the piece. Still, "Centurion" is a marked improvement over the nonsense of "Doomsday," providing evidence that Neil Marshall still has plenty of potential within him.