Writer-director-actor Carl Reiner famously decided to end The Dick Van Dyke Show after five seasons, while it was still in its prime or, as might be said today, before it "jumped the shark." Mary Tyler Moore, Van Dyke's co-star, surely must have been thinking about this precedent when she opted to end Mary Tyler Moore after seven seasons, near its creative peak.

In my review of The Complete Sixth Season I suggested that was the series' best, culminating, sort of, with that season's acclaimed "Chuckles Bites the Dust" episode.

But I was wrong. Everyone remembers Mary Tyler Moore's final episode, "The Last Show," with its cast locked in a group hug, singing "It's a Long Way to Tipperary," but I had forgotten just how many side-splittingly funny and unexpectedly sweet episodes comprise Mary Tyler Moore's final year - one far superior to the show's first three or four seasons and at least as good as the previous two. In retrospect, it probably could've / should've continued for another year or three. (However, it's worth noting both The Dick Van Dyke Show and Mary Tyler Moore slipped significantly in the ratings their final year.)

The Mary Tyler Moore Show - The Complete Seventh Season wraps up the series, at least on DVD, in a mostly satisfying manner. At least it's all finally out; Fox's sporadically released DVDs ended up taking one year longer than the show's original seven-year network run. The transfers are just okay, and the dearth of extra features - a sharp contrast to the supplements-crammed first season set - is unfortunate, but at least it's available, and perhaps will find a new audience in the process.

The Complete Seventh Season is supposed to feature one notable extra: a final curtain call by the cast that originally aired over the end credits of "The Last Show" when it first aired on CBS in prime time. When Mary Tyler Moore went into syndication, these end titles were replaced by the show's usual end titles (the cast in clips from the episode, footage of Mary in Minneapolis, etc.).

The set we received here at DVD Talk did not include the curtain call version, but ended with the syndicated end title cut. Fox then sent us a replacement disc with the curtain call ending, but nothing on the physical disc or on the menu screens distinguish the two versions. Consumers will want to check the last chapter stop of the last episode to make certain the curtain call version is included. If not, you might try calling Fox Customer Service at 888-223-4369.* 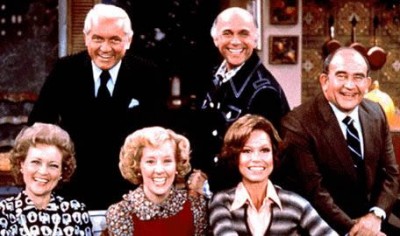 Local television news producer Mary Richards (Moore) is an attractive, single woman of 37 whose pleasant work environment offsets her rather ordinary, unexciting personal life, filled with dates that never result in lasting relationships, and hosting the occasional dinner party that, infamously, are always a complete disaster.

Terrific episodes abound. "Mary Midwife," during which Georgette gives birth to a daughter in Mary's bedroom, eschews the usual sitcom form revolving around such mothers-in-labor shows by instead revolving it around Lou's indignation after Mary accuses him of being fat. "Murray Can't Lose" is a good vehicle for MacLeod, focusing on his insecurities and low self-esteem, and "Mary's Insomnia," about her growing dependence on sleeping pills and Lou's efforts to help her to kick the habit, is arrestingly serious and dramatic.

Even better than "The Last Show" is the series' penultimate episode, "Lou Dates Mary," which head-on addresses the series-long implicit feelings of Mary and Lou toward one another, which television historian Vince Waldron describes as "the most passionate love affair in TV history ... [un]sullied by carnal pleasure": after 20 years of fruitless dating, could Lou be the man of Mary's dreams? It's a show with palpable comic tension - and indescribably sweet and hilarious.

Before that is "Mary's Big Party," a funny retrospective episode mostly done in total darkness when a citywide blackout ruins yet another of Mary's famously bad get-togethers. That episode features an ingenious cameo by Johnny Carson who, for the lack of electricity, is heard but never seen.

That last show is prescient in several ways, anticipating both the stark shift away from hard news and toward the superficial at both the local and network level, and co-creator James L. Brooks's later biting satire Broadcast News (1987), in which Jack Nicholson is essentially playing a network television version of Ted Baxter.

The Mary Tyler Moore Show - The Complete Seventh Season presents 24 full-frame shows on three single-sided, dual-layered discs. The transfers are okay, significantly better than the MTM-produced Bob Newhart Show, also released by Fox, and the first season Rhodas, sub-licensed to Shout! Factory, but they fall short of pristine. The 1.0 Dolby Digital mono is adequate, and optional English and Spanish subtitles are included.

The aforementioned "Curtain Call," at the end of "The Last Show," only lasts about 50 seconds and features little more than the cast running back into the newsroom set to take a bow before a thunderous studio audience but it's an appropriate, emotional end to the series.

One of the five or six greatest television comedies ever, Mary Tyler Moore is a must that still holds up well today, and its huge impact on sitcoms to follow is immediately obvious. The Mary Tyler Moore Show - The Complete Seventh Season is one of, if not the best season of them all, and a DVD Talk Collector Series Title.

* Special thanks to editor John Sinnott and the folks at Internet Brands for helping sort this out.