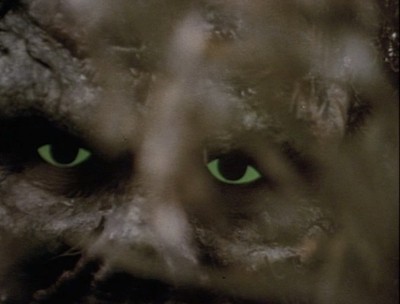 I feel like alienating some hardcore fans tonight, as often happens when one reviews genre DVD products. Then again, maybe I'm safe because how could people get truly hardcore about Swamp Thing: The Series anyway? [Ducks from thrown brickbats.] Yet, before you call for a public pillorying, let me say this. I love Swamp Thing. Huge fan of the Wrightson era, and pretty much everything that followed, especially Bissette and Moore's stint. Of course I am quite fond of Wes Craven's silly movie version too, but I just don't get the series, which concludes in this four-disc collection, Volume Three.

Often combining daytime-soap-worthy plots with distinctly low-wattage genre trappings, Swamp Thing has late night cable TV written all over it. Likable characters and a puckish attitude are certainly charming, elevating the series above brackish waters, but I can't help imagining myself tuning in back in the day, only to fall asleep on the couch halfway through the episode. Stretched out over the final 24 episodes from the beefy 50 episode Season Three, this amalgamation of stories continues the trend of cheap melodrama. Reliance on which points out how The Series trundled on down the road towards becoming The Incredible Hulk lite, focusing on a big green guy in hiding, and the fact that he can never really catch a break.

Parts of these episodes crank it up a notch, such as the inclusion of Tyne Daly as an over-the-top villain, or pump out a little more freakiness, as when Arcane turns into one of his own hideous mutants. But too often we're stranded with mild stuff like petty thieves learning life lessons in the swamp, while good old Dick Durock (R.I.P.) looms out from the bushes with an imperious look in his eyes.

Skipping over certain non sequitur episodes (some of which appear on an earlier volume) in favor of cobbling together some kind of narrative arc, I guess, the 24 episodes presented are as follows:

Simply judging from the above episode titles it's easy to see that Swamp Thing: The Series mostly squandered the narrative arc so ripe for the picking - the love-affair/conflict between Alec "Swamp Thing" Holland and Anton Arcane. Perhaps due to what was likely a breakneck production pace episodes eschew throughput for lame riffs on old movies ("Romancing Arcane") and standard TV tropes like lonely kids lost in imagination ("Yo Ho Ho"). Yet somehow, by series' ignominious end you might realize why you wasted all those nights watching cable. Even though the plots are kind of stale, and the tension, conflict, and supernatural monster-y-ness that makes the comics so good is pretty much absent, there's something there. It's a small thing, but for what it's worth, the characters are lovable. Especially Durock's Swamp Thing, stiffly lumbering about, eyes flashing, all paternal and irritable - he's like your ass-kicking grandpa. Faint praise, I know.

Video:
At six 24-minute episodes per disc, there shouldn't be much trouble with this presentation. Yet these fullframe 4 X 3 pictures are merely decent, and occasionally sport some annoying aliasing, sometimes making Swampy look a little too weird, if you catch my drift. In general, they look a tad digitally harsh, and the color palette, heavily green of course, is pretty drab.

Sound:
Dolby Digital 2.0 Stereo is acceptable but unremarkable, with a fairly limited dynamic range and not much in the way of stereo imaging. All dialog is discernable and mixed appropriately with music.

Extras:
Unfortunately, the swamp has been drained of extras. The season comes in a standard sized keepcase with two flippers.

Final Thoughts:
Curiously managing to attract a following of stoner insomniacs, Swamp Thing: The Series was never great shakes. The cursed piece of walking plant matter has been rendered into something of a supporting character for a strange Cable TV experiment - part sit-com, part sci-fi drama - that rarely rises above rote. Dick Durock as Swamp Thing is charming, and ultimately the characters are loveable. But I'm guessing when Wrightson and Wein created the creature, loveable and charming weren't what they were aiming for. Rent It.