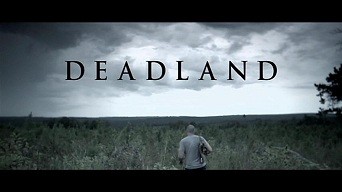 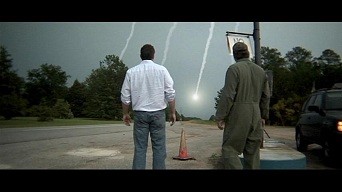 Deadland, a low budget postapocalyptic romp filmed in the woods of Georgia, has a well-made introduction. We are introduced to the film's protagonist, Sean Kalos (played by Gary Weeks, who also penned the screenplay). Sean pulls into a dilapidated gas station and attempts to make amends on a cell phone with his estranged wife Katie. His phone goes dead, so he walks into the station and requests a phone from the clerk, who at first seems rude when he absentmindedly tosses Sean his cell. That phone is dead too, and Sean soon discovers that the clerk is engrossed with the news coverage on a small television - announcing the beginning of World War III. The pair exits the building in time to see nuclear missiles falling on city targets in California. The scene is only 3 minutes, but it successfully pulls the audience into the world that gets developed in the movie.

Much of Deadland occurs five years after the reign of bombs pictured in this prologue. The fate of the United States is bleak - and admittedly a bit muddled. The country is now apparently divided into 13 provinces - and survivalists live out in the woods. Malicious army types run prostitution camps. Everyone suffers from some kind of plague requiring medication. The near future is grim indeed.

Navigating these forests is Sean, who has apparently spent the last five years (does anyone else remember that David Bowie song Five Years?) wandering the remnants of America. What's important about the film is not its convoluted setting per se but the central plot. Sean uncovers a list of names with a coded message he cannot decipher - and in that list is his wife's name. Is it his wife or someone else named Katie Johnson? Sean decides it has to be his spouse and risks life and limb to find her. He pairs up with a disturbed man named Jax (Brian Tee) as he pursues his wife.

Given its clear low budget, Deadland is certainly ambitious. While distributor Phase 4 Films' cover art suggests that the film is a Mad Max-style action film, it's actually much more somber and introspective. The film, at times, has the ambience of Terrence Malick's haunting The Thin Red Line, with lengthy shots of characters walking through their environment intercut with flashbacks developing their back-story and motivation (the former presented in a washed-out palette and the latter in bright colors). It's nowhere near the level of The Thin Red Line, of course, but the effort is there, nonetheless.

The film, however, doesn't really work as well as it could. At 107 minutes, it feels about 20 minutes too long, with too many character shots for its own good. Action fans deceived by Phase 4's cover art will be disappointed: there is some gunplay, sure, but it's fairly subdued - and the few fight scenes that do occur aren't convincingly staged. Plus, while the world created by Gary Weeks is compelling, it doesn't really strike one as realistic - and five years are too much of a time elapse for this story to seem likely. Top-billed William Katt (from the cult television series The Greatest American Hero) appears here in an extended cameo as a crazed code breaker, and his performance is distractingly over-the-top. Clearly, Katt's name is here to provide some geek authenticity; at least, his performance is longer than his blink-and-you'd-miss-it scene from Bone Eater.

Still, I give Gary Weeks and director Damon O'Steen credit here: while the film is flawed, it still offers more originality than most of its low budget ilk. Given the disc's in-depth extras (more on these below), Deadland is worth a look. Recommended. 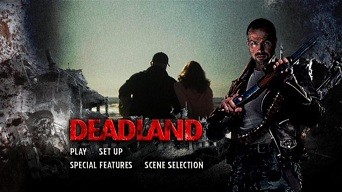 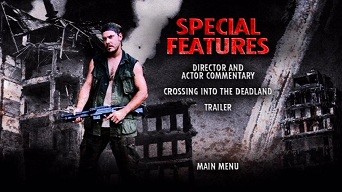 Phase 4 Films gives Deadland an anamorphic widescreen presentation with a 1.78:1 aspect ratio. Much of the film as a deliberately washed-out color palette, but details seemed reasonably strong.

Two audio options exist: English 5.1 Surround and English 2.0 Stereo. The former appears to be the default and the one I listened to. I'd describe the sound quality as a mixed bag - the score and ambient natural noises came across strong and clear, but dialogue was sometimes obscure. No subtitle options appear available.

Trailers for Slave, Scar, and Cornered! precede the main menu. A Special Features sub-menu doesn't provide access to these trailers, but it does have an additional trailer for Deadland itself.

More significant extras include a feature-length commentary with actors Gary Weeks and Brian Tee, and director Damon O'Steen. A random sampling suggests it is informative and the participants keep things humorous. In addition, Crossing Into the Deadland (29:14) offers a surprisingly in-depth look at the making of the film.

Writer and star Gary Weeks makes a somber and grim postapocalyptic film with director Damon O'Steen in the backwoods of Georgia. Deadland has flaws in its pacing and acting, but it's creative enough to stand out from its low budget brethren. Recommended.