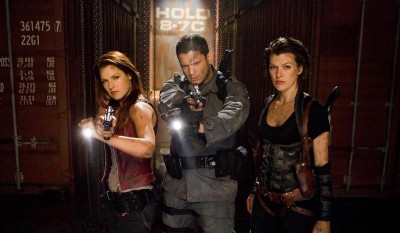 At this point, I feel pretty darn guilty for ever thinking the original 2002 "Resident Evil" installment was any type of mindless fun. Two sequels sufficiently bled the premise dry, taking off into their own witless directions, with the last picture, 2007's "Extinction" at least finding some environmental invention to play around with. Hoping the war was over, "Resident Evil: Afterlife" has arrived to recharge the franchise, with Paul W.S. Anderson returning as director and the whole shebang captured with 3D cameras to bring the adventures of Alice into your lap. It's a polished effort, but astoundingly joyless and deathly dull, which seems par for the course when it comes to the "Resident Evil" movies.

Freed from her superhuman prison by the evil Albert Wesker (Shawn Roberts), Alice (Milla Jovovich) has returned to humanity, or at least what's left of it. Out to find Claire (Ali Larter) and those she left behind in Las Vegas, Alice senses hope in a safe haven rumored to house the survivors of the T-virus outbreak. Taking to the air, Alice flies her way to the ruins of Los Angeles, touching down on top of an abandoned prison complex, where a few humans remain, unable to escape due to the nearby zombie infestation. With Luther (Boris Kodjoe), a basketball player; Bennett (Kim Coates, doing his best Saul Rubinek impression), a sleazy Hollywood producer; and Chris (Wentworth Miller), Claire's soldier brother, by her side, Alice plans an escape from the prison, hoping to land on a nearby supertanker, home to possible freedom. However, Wesker and the Umbrella Corporation have other plans for their prize.

Anderson was truly pulling ideas out from his rear end with the first "Resident Evil," trudging through the challenge of adapting a video game to the best of his ability, embracing the shock value of a few of the more vivid enemies out to gobble up Alice. With the novelty now gone, Anderson looks to the miracle touch of 3D to revive the series, scripting a journey for our heroes that returns the action indoors, to best exploit not only the new visual dimension, but to recreate the claustrophobic feel of the original feature film. 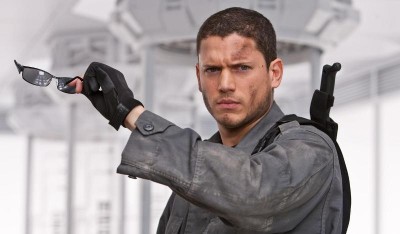 The only true upside to "Afterlife" is the 3D cinematography, which is crisp and clear, embracing the fact that it was, in fact, captured with actual James Cameron-smooched hardware, and not some post-converted rush job to compete in the marketplace. Anderson is clearly charged up by the dimensional possibilities (and an opportunity to pilfer from "The Matrix"), staging a series of action sequences that drip with bullet-time staging, slowing down the mayhem to study every last grimace, flip, and weapon discharge in magnificent detail. It's very striking, but resembles more of a 3D demo reel than purposeful brutality, making the film feel more at home on a Best Buy sales floor than a multiplex. Anderson tosses body parts and coins (Alice likes to load her shotgun with quarters) toward the camera, and holds a real fascination with big empty spaces, but it never gels together as a rousing event. It's merely cheap theatrics at times -- I'm surprised Alice never picks up a paddle ball to extinguish the zombies.

Visuals are pretty much all there is to the "Afterlife" experience, which features Anderson's most inane scripting to date. Never mind the fact that nothing of note actually happens in the film (this includes the reintroduction of Wesker, who's nothing more than a drab Aryan irritant), but "Afterlife" doesn't even try to stay compelling, or coherent for that matter -- a fact underlined in a mid-movie battle between Claire and a hulking, hooded monster carrying around a massive hammer. Who or what is this unstoppable beast is never addressed, with the giant only introduced to show off another round of special effects and 3D showmanship. 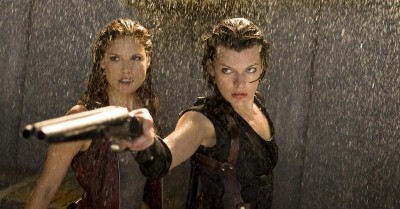 It's not as if this film is teeming with accomplished actors. The least Anderson could do is keep the energy up and the violence flowing. Instead, the picture drags along the ground with worthless exposition or staring contests between the stars, hoping the awe of 3D will be enough to pass for a good time. Considering it's his own mythology "Afterlife" is working from, one would think Anderson would have the hang of this franchise by now. Instead, he's still sketching some type of epic outline of corporate evildoing and apocalyptic panic. Four films in, and I still don't have a clue what's going on. I sincerely doubt Anderson does either.

Perhaps the first 3D motion picture to simulate the experience of watching paint dry, "Resident Evil: Afterlife" is a dreadful bore that only occasionally comes to life. Even then, it's still a tedious mess of half-realized ideas, guided by a filmmaker who really shouldn't be allowed to make movies in the first place.