Shout Factory // R // December 7, 2010
List Price: $19.93 [Buy now and save at Amazon]
Review by Stuart Galbraith IV | posted December 19, 2010 | E-mail the Author
Shout! Factory's latest offering in their line of producer Roger Corman's Cult Classics Double Features is a double wallop of trash-talking Angie Dickinson as the doting mother and Tommy gun brandishing Wilma McClatchie, in Big Bad Mama (1974) and its sequel-cum-remake, Big Bad Mama II (1987). Though obviously patterned after Bonnie & Clyde (1967), each is ambitious relative to the standard drive-in exploitation Corman was peddling at the time, upgraded to almost-mainstream releases. The earlier (and better) picture, with its frequent nudity and explicit sex scenes, manages to be titillating yet also fiercely feminist at once. Beyond Dickinson's amusing and sexy performance its best asset is the way it subverts the usual crime melodrama, featuring as it does meek and subservient men and forceful, take-charge women. Both films are set at the height of the Great Depression and even attempt some social commentary, that Wilma's crime spree is no worse than the idle rich's contemptible attitude toward the nation's starving poor.

Though Shout! Factory's clearly had to work with less than pristine elements (Big Bad Mama II opens with loud pops on its soundtrack and reel change cues are visible), both 1.78:1 enhanced widescreen transfers are excellent overall. And in keeping with the drive-in atmosphere a "Grindhouse Experience" option gives viewers the chance to watch this double-bill complete with trailers for other Corman pictures plus a batch of public domain drive-in ads (one with a Something Weird Video watermark). Solid new extra features join the already bountiful previously released ones. 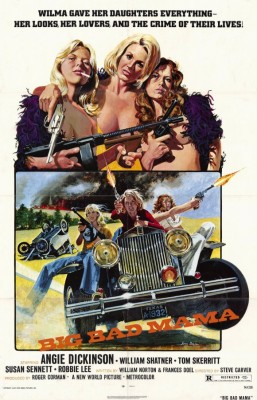 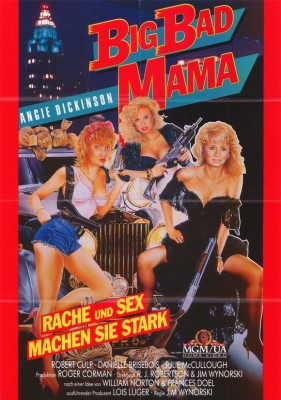 In Big Bad Mama, Wilma McClatchie (Dickinson, then 43) takes over her kindly if lascivious Uncle Barney's (Noble Willingham) bootlegging business after the death of her lover, in order to support teenage daughters Billy Jean (Susan Sennett) and Polly (Robbie Lee). They're not very successful, however: inept government agents Bonney (Corman regular Dick Miller) and Dodds (Tom Signorelli) are on their trail, and just as they attempt to deposit their illegally-got gains gunman Fred Diller (Tom Skerritt) attempts to steal Wilma's bankroll during a robbery.

In a clever twist, she decides then and there to take charge of the bank robbery-in-progress and soon Fred is working for her. Wilma and Fred become lovers, but love 'em and leave 'em Wilma quickly dumps Fred for charming grifter William J. Baxter (William Shatner), whose wealthy southern gentleman guise Wilma immediately recognizes. Nevertheless, she's taken with him and he reluctantly joins their gang, though Wilma's felony crimes are way out of his minor league misdemeanors. Fred, spurned, turns his attentions to both daughters. Wilma, meanwhile, ups the ante by kidnapping a millionaire's spoiled daughter (Joan Prather, excellent the following year in Smile).

Filmed in just 20 days on a modest budget, it packs a surprising amount of action and production value, considering; despite money and time comparable to a low-end TV-movie, it really looks no less expensive than Bonnie & Clyde, a big studio film. In the commentary producer Corman talks about advising director Steve Carver (An Eye for an Eye) to paint the vintage background automobiles a different color on each side so that they could pass in front of the camera, turn around, and drive past the lens again masquerading as a second automobile.

If Bonnie & Clyde was at least partly about impotence (Warren Beatty's Clyde Barrow struggles with it throughout that picture), Big Bad Mama is partly a story of sexual liberation, of strong women taking control of weaker men: Fred, dominated in bed and on the job by natural leader Wilma, becomes obsessed with his billing in newspaper accounts of the gang's activities; and Baxter, outwardly slick and suave but so averse to danger and violence that he's almost like a damsel in distress.

It's no wonder Dickinson agreed to disrobe as frequently and completely as she does in this, more so than nearly all actresses of her generation. (Skerritt and Shatner also strip stopping short, so to speak, of full-frontal nudity.) The daughters are frequently naked as well; even Sally Kirkland turns up briefly, topless.

The script, apparently mostly by Frances Doel with some minor additions/changes by William W. Norton, is episodic, even scattershot, but there are many fine and funny scenes: Wilma objecting to one daughter's marriage, prompting a free-for-all at her hometown church (where Royal Dano is its minister); the meet-cute scene between Wilma and Fred at the bank robbery. And nearly all of Dickinson's dialog ("Get yer hand off my tit, Barney!") is sassy and outrageous; Dickinson herself clearly is having a blast.

Shatner though comes close to stealing the picture away, admirably ditching completely his testosterone-driven, man's man screen image, personified by his long stint as Captain Kirk on Star Trek. It's a brave, funny, and even sweetly touching performance.

The Mama-come-lately sequel, Big Bad Mama II, produced by Corman's Concorde Pictures (as opposed to his earlier New World) is more a remake than a follow-up, ignoring as it does Wilma's fate at the end of the first film, and the way it reworks with slight variations most of the main plot points of the original. It lacks the relative freshness of the 1974 picture and is more ordinary, with much less explicit sex and more routine action, though the climax is exciting and the film's outrageous epilogue is enormously satisfying.

Making no attempt to connect with the narrative of Big Bad Mama, Big Bad Mama II pretty much starts back at the beginning, with shack-dwelling Texan Wilma McClatchie (Dickinson, then 56) and her two teenage daughters, Billie Jean (Danielle Brisebois, late of All in the Family/Archie Bunker's Place) and Polly (Julie McCullough) witness to the murder of Wilma's husband by police under orders from gubernatorial candidate Morgan Crawford (Bruce Glover).

Wilma is determined to wreak her vengeance upon Crawford, first by robbing his various companies - he seems to own half of Texas - and later by kidnapping his handsome son, Jordan (Jeff Yagher), who falls for Polly. Meanwhile, aspiring newsman Daryl Pearson (Robert Culp), seeing Pulitzer Prize-winning material in economically poor Wilma's battles with one-man conglomerate Crawford (and physically attracted to the gangsteress to boot) is hot on Wilma's trail as well.

Even employing a rather obvious use of a body double (Monique Gabrielle) for her nude scene with Culp (also doubled), one has to admire Dickinson's chutzpah and, moreover, her entirely successful performance as the still genuinely sexy Wilma. Culp, though almost always enjoyable, is a much more the standard, less interesting leading man than was Shatner's weakling. Glover (Diamonds Are Forever), whose unusual features suggest a demonic Japanese goblin, makes an interesting villain, however, and the climatic showdown generates some real suspense.

Both films are presented in 1.78:1 enhanced widescreen (adapted from their 1.85:1 release versions) on one single-sided, packed-to-the-gills dual-layered disc, and both generally look quite nice considering. The region "1" encoded disc offers English mono tracks only with no subtitle options; audio is fine, though.

The set is a mix of older and new supplements, several of which aren't even noted on the packaging, such as a second audio commentary track on Big Bad Mama featuring Corman and Dickinson, which is quite wonderful, with each warmly nostalgic and full of compliments for the other. (Also included is a separate track with director Steve Carver and cinematographer Bruce Logan.) "Mama Knows Best" is a good retrospective featurette with on-camera interviews including most of the above plus co-writer Frances Doel. Leonard Maltin talks briefly with Corman about both pictures, which are accompanied by trailers and TV spots. Big Bad Mama II director Jim Wynorski provides an affectionate commentary for that film, which also includes an on-camera interview with Bruce Glover. The aforementioned "grindhouse experience" options also adds to the fun.

Like-minded films from the same producer and star but from different eras of film distribution and with varying emphases, Big Bad Mama and Big Bad Mama II make an intriguing, entertaining double-bill and the good transfers and extras add to its value. Highly Recommended.