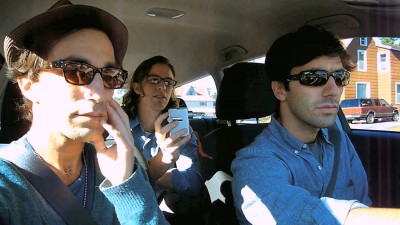 The fact of the matter is, if you can see Catfish without knowing anything about it--without seeing the trailer, without perusing the back story, without hearing about its controversy--you should just do that. It's just impossible for us to talk about the picture or any of its secondary concerns without giving away more than, frankly, I wish I'd known going in; if you have an interest, then yes, it's worth your time, so go see it and read this later.

You back? Good. We'll stay spoiler-light, in case anyone hasn't heeded the warnings. It is the story (as you well know, reader who has already seen it) of New York photographer Nev Schulman, who strikes up on an online friendship with a Michigan family--first through youngest daughter Abby, an eight-year-old painting prodigy who creates a canvas from one of his drawings, and then with her older sister Megan, a sultry musician and dancer. They email, they Gchat, they text, they talk on the phone; the relationship gets a little heavier. They're seductive, these online flirtations. Nev, boyish and likable, gets sucked right in; he speaks authoritatively of "real life" as this whole other thing (i.e., "If we met in real life..."), but you can feel him starting to conflate the two.

But then it goes bad. Nev and the filmmakers (he shares an office with them; one is his brother) discover a hole in Megan's façade, a blatant (and fairly lazy) piece of dishonesty. But the truth is like a snag in a sweater, and once you start to pull on it, the whole thing comes undone. "I can't believe I was so gullible," Nev despairs. "I'm so embarrassed." Boldly, the subject and the filmmakers--who are on a trip to the Midwest--decide to take a detour to Michigan and figure out what's what. "Let's kick some dust up," Nev proclaims. It doesn't end up being quite that simple.

What happens next I won't say, even within these spoiler-warninged confines, except to note that while Rogue's marketing people might reap some short-term benefit out dressing Catfish up like a The Blair Witch Project-style thriller in the trailer, it's a dishonest approach that will probably lead to some fairly venomous word-of-mouth. It doesn't turn into some kind of a horror documentary (though that impression can't be helping those pesky "it's a fake" rumors--more on that presently); what it becomes is a "shock doc" of surprising twists and unexpected revelations, along the lines of Dear Zachary and Talhotblond (which covers some similar territory).

Now, within those parameters, it's a doozy--compelling and fascinating, troublesome and thought-provoking. Directors Henry Joost and Ariel Schulman expertly fuse the doc trappings and fast pace of reality TV with a genuine sense of suspense and dread--aided immeasurably by the tense (but, and this is key, not overblown) score by the great Mark Mothersbaugh. It's not without humor, but there's serious stuff on its mind, and the ultimate topic (the complexity of online identity) is treated with intelligence and depth. What's most conspicuous about the film is its immediacy; it's a distinctively of-the-moment movie, not just in its subject matter (a romance that begins on Facebook) but its visual style, which uses not just the ubiquitous social networking site as a storytelling device, but employs Google Earth and Mapquest for transitions and narrative propulsion.

Catfish has been the subject of debate since its Sundance debut (though the chatter has ramped up considerably as its release date approaches) by those who believe it to be a "fake." What exactly that means is in flux-- Orson Welles would love this debate --as some contend that the film is staged top to bottom, some say that sections of it are scripted while others aren't, and other, more nuanced commentators (like Kyle Buchman at Movieline) charge that the initial situation was genuine, but the turns were drawn out and manipulated by the film's creators. There's a deep well of this stuff lurking out there on the Internet, and it's kind of like delving into the 9/11 truther theories; some of the objections have a grain of troublesome incongruity, but most of it is a real stretch. Personally, I saw none of the mannered, hyper-"real" acting and shaky yet choreographed camerawork that ultimately gives most faux-docs away; frankly, it turns out to be a hoax, they deserve whatever money they make from fooling everybody. If this is a fake, it's an incredible fake.