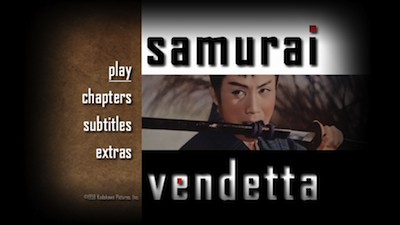 As the new AnimEigo disc of the 1959 Japanese movie Samurai Vendetta (Hakuôki) loads, there is a helpful screen that informs viewers that the movie is so tied into the popular legend of the 47 Ronin, those who aren't familiar with the tale might want to check out the on-disc liner notes before watching Vendetta, lest they find the flick impenetrable. Great, that was actually really informative. Now what do you do if you find it impenetrably boring?

Samurai Vendetta starts out well enough. Nakayama Yasubei (Shintaro Katsu, who was soon to become Zatoichi) is hauling butt to get to a fight where his sword fighting school is settling a rivalry with another school. He is stopped by a noble samurai named Tangé Tenzen (Raizo Ichikawa, An Actor's Revenge, the Ninja series), who informs him that the cord tying his kimono is of insufficient strength to keep the outfit on. Yasubei has no time and thanks him all the same, he must get in the fray. The wardrobe-challenged fighter gets to the arena just in time to spank his opponents heartily, which is bad news for Tenzen, who is actually from that rival school. Ooops. His failure to get involved gets him the boot, and Yasubei is expelled to even things out between the organizations. Will they be rivals or arch enemies?

Well, both and neither. Their paths cross further when they both fall for the same woman, but then diverge again as complicated events conspire to put them on opposite sides of the 47 Ronin plot. Yasubei joins the rebels, whereas Tenzen ends up in the service of the cowardly Lord Kira. In between them, yet again, is the woman they both desire.

Samurai Vendetta isn't all bad. In addition to the opening, a few scenes stand out as being really strong. Tenzen's defense of his wife and how he convinces his family that an attack against her wasn't her fault by tricking them into thinking a fox spirit invaded their home is fascinating and clever, and the climactic battle, which involves a duel in the snow, is invigorating. Director Kazuo Mori has created a colorful movie full of magnificent sets, delivering the equivalent to one of Hollywood's more upper level westerns. So, even when it's bogged down in political intrigue and slow-moving relationship stuff, Samurai Vendetta is a good-looking movie.

Yet, there is more of that boring stuff than there is exciting material. A fight on a bridge between Tenzen and his former allies is pretty good, but when he runs back through the fight in his head, identifying the survivors by their wounds, Mori creates a clumsy montage to show each man being struck from an off-screen swordsman. Worse is a hilariously bad scene where a bunch of dogs attack, and the crew is literally tossing the pooches at the actors. Somebody accused "attacked by" and "attacked with."

Samurai Vendetta's biggest problem, though, is that it's just too talky. The repressed passion, the endless discussion of family manners and social code, didn't strike a cord with me. The characters spend too much time circling the issues, hinting at a melodrama that never quite comes. This makes the wait between the fight scenes unbearable and lessens our connection to otherwise intriguing characters. There is barely even a revenge plot, I am not sure what the deal is with the English title. In other words, this Samurai Vendetta is a dud. 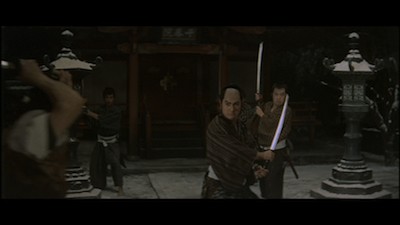 Video:
The very wide 2.35:1 anamorphic widescreen transfer is pretty good looking. The colors are vivid and have an almost painterly look, preserving the texture of old Technicolor. There are occasional spots and scratches on the transfer, but they only appear intermittently.

Sound:
The original Japanese soundtrack is comparable to the video transfer: it's mostly clear and easy to hear, but there are some crackles and pops at different times. The mix is pretty much centralized, with no real effects. 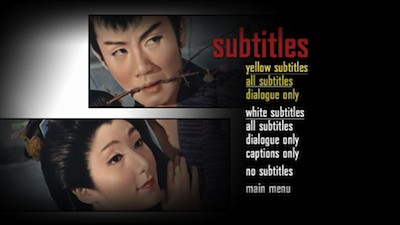 There are a variety of subtitle options, and you may have to do some jumping around and experimenting to figure out what exactly you want. There are two caption tracks: the bottom subtitles convey the dialogue, and the upper titles give historical and cultural notes that add quite a bit to the movie. It can be a little hard to read both, but they are well-written, and depending what options you choose, you can have them be different colors. The dialogue is also in multiple colors, allowing the written words to keep up with the spoken dialogue when it is going fast.

Extras:
Most of the disc's extras are text or gallery based, including an image gallery, cast and crew bios, the notes on 47 Ronin, and notes on the movie itself. 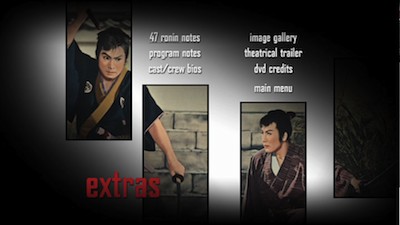 The one video extra is the original theatrical trailer.

FINAL THOUGHTS:
I wouldn't call Samurai Vendetta a horrible movie, though it is a thoroughly boring one. Some of the action is pretty good, and the film hints at humor and touches of romance, but most of the story is comprised of slow-moving conversations about the politics of samurai life. Though pretty to look at, Samurai Vendetta is too dry. I would never watch it again, I can't really encourage anyone to seek it out. Skip It. 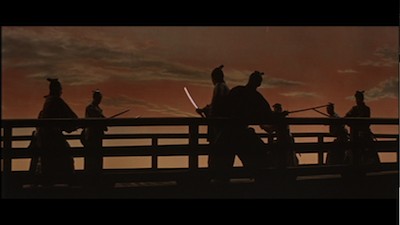