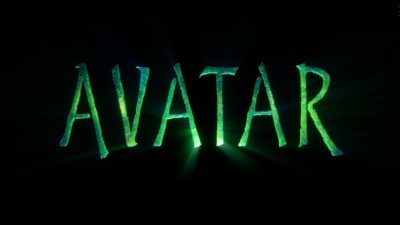 A lot of adjectives have been used to describe James Cameron, but subtle isn't usually one of them. As purveyor of blockbusters Titanic, The Abyss, Aliens and Terminator 2: Judgment Day, Cameron successfully convinced 20th Century Fox to gamble obscene amounts of money on a conservationist-minded science fiction film with major characters and environments that had to be created in a completely digital realm. That film is Avatar, now the highest grossing movie in history. Its story may be simple, but Cameron's amazing technical achievements make it unlike any movie that has come before.

Most of you reading this review have no doubt seen Avatar, perhaps several times and on different mediums. The film was released in theaters in December 2009 in 2-D, 3-D and IMAX formats, and Cameron created an expanded version of the film that was shown last summer. Set in 2154 on semi-hospitable moon Pandora, Avatar finds the RDA Corporation mining unobtainium, a valuable fuel-source mineral. Pandora's natives, the giant blue Na'vi, are less than thrilled about their homeland being pillaged, and RDA policy for dealing with the Na'vi is decidedly split. 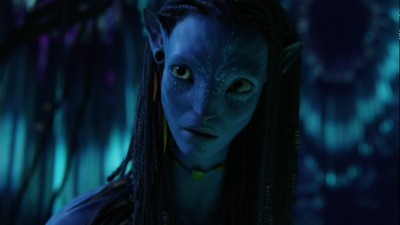 The military wants to come in and blow them all to hell, while scientists in the Avatar Program inhabit genetically matched, lab-grown Na'vi bodies via a mental link in an attempt to make peace with the natives. Jake Sully (Sam Worthington), a paraplegic and former United States Marine, comes to the program as a replacement after his twin brother is killed. Sully works for lead scientist Grace Augustine (Sigourney Weaver) and falls for beautiful Na'vi Neytiri (Zoe Saldana) as he struggles to prove himself to the tribe.

Avatar has been criticized for having a simple narrative that many equate to the story of Pocahontas. I can certainly understand this thinking, as Avatar's storyline is pretty generic. Nevertheless, the familiar native/invader conflict allows the technical wonders achieved by Cameron and his team to share center stage without being burdened by an overly complicated narrative. Normally I would not so quickly praise a movie that puts visual prowess before narrative, but Avatar, being so visually wondrous, is not like other films.

By perfecting a motion-capture system to record the emotions of his actors, Cameron made the Na'vi completely believable. 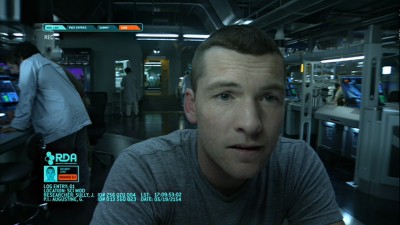 At no point during the film did I question their authenticity. Sully is just as realistic in his blue body as he is outside the visual link. The Na'vi avatars so closely resemble the actors playing them that I often forgot they were created in a computer. This sounds hyperbolic, but Weaver's avatar could be her blue twin. Cameron also created an entire world of Pandora - which is set to be explored further in future films - complete with plant and animal life, varying terrain and the heavy machinery of the invaders. Only after the credits rolled did I realize how much of what was on screen in Avatar was not really there when filming. I could ramble on about how beautiful Avatar looks, but I have not seen serious criticism contending otherwise.

Returning to the story of Avatar, which, while succinct, is well-executed and has an emotional impact thanks to the talented group of actors Cameron picked for the film. Worthington does his best work here, and he is able to move past the one-dimensional action heroes he played in Clash of the Titans and Terminator Salvation. Weaver, a veteran of Cameron films, may play a stock environmentalist, but she does so in a way that makes her conviction believable. Stephen Lang is similarly strong as Colonel Miles Quaritch, an All-American badass killing machine, and Saldana continues to grow into a great actress with her Neytiri performance. Giovanni Ribisi was an interesting choice to play RDA Corporation boss Parker Selfridge. Unfortunately, most of his scenes were left on the cutting room floor.

Avatar is, first and foremost, an action-packed science fiction spectacle. While you do not get 2.5 hours of explosions, the bang-bang on display is on a massive scale, the highlights being Sully and Neytiri's flight on Pandoran beasts and the final confrontation between the military and the Na'vi. 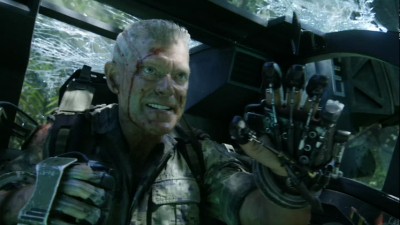 All the locations and creatures in Avatar make the prospect of two forthcoming sequels that much more exciting. Avatar is not a perfect film, but it is an amazing technical accomplishment. I have no problems with the story; it is emotionally involving and never sparked disinterest. Even the viewer most critical of Avatar can agree that there is a lot on screen to like.

Fans of Avatar were not pleased when word came down that the April 2010 Blu-ray and DVD release of the film would offer only the theatrical cut and include no bonus features. Fortunately, the time between the original April release and this November 2010 re-release allowed Cameron to put together an amazing Collector's Edition package. This three-disc set contains three versions of the film: theatrical version (162 minutes), extended cut (171 minutes) and Collector's Edition (178 minutes). The extended cut adds several action scenes, a scene in Grace's former schoolhouse and the much-discussed Na'vi "sex scene." The Collector's Edition adds all that plus more scenes of character development, a deeper exploration of the Na'vi tribe and an interesting alternate opening that takes place on Earth. The DVD includes a handy menu that allows viewers to directly access scenes added to the extended cuts. I would rate the theatrical cut of Avatar a solid 4 stars, and I think the extended and Collector's Edition versions actually improve the film. The added scenes give the depth-starved characters more breathing room, and the additional action scenes are well-integrated. I am not a big fan of the alternate opening, which, while interesting, feels ripped straight from the reels of Blade Runner. Overall, fans will be very happy to have the choice between three different versions of Avatar. 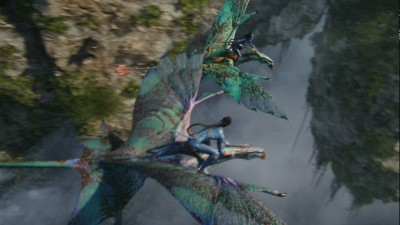 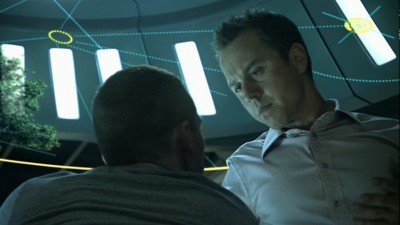 Slipcover and Blu-ray Book fans rejoice, as Avatar: Extended Collector's Edition offers both. The set comes with an attractive holofoil slipcover surrounding a sturdy slipbox. Inside the slipbox, the discs are housed in beautiful book-style packaging. One caveat: Each disc is housed inside its own page in a little pull-out paper tray. I imagine some people will not be thrilled at the lack of a hub, but I found that the discs slip very sturdily inside each page. The movie's different versions are seamlessly branched, but still spill over onto the second disc. The third disc is exclusively for bonus features.

I can think of no legitimate reasons for Avatar not looking good on DVD. No excuses are needed, as 20th Century Fox's 1.78:1 anamorphic widescreen presentation looks incredible. The world of Pandora is perfectly preserved in this transfer: Colors are big and bold, and contrast is spot-on. Skin tones, while frequently blue, look natural, and blacks are deep and well-defined. Detail is usually excellent, especially in tight shots. Things look especially good in the Na'vi village, when detail and effects are at their finest. Two very minor issues are compression artifacts and softness. Avatar is a long film, and some compression artifacts do appear, especially in frenetic action sequences. I also noticed a couple of soft shots, though this may be a result of how Cameron shot the film. Overall, Avatar looks about as good as can be expected in standard definition.

The DVD includes a strong Dolby Digital 5.1 track that handles the heavy task of balancing dialogue with the film's significant ambiance and score. Effects come through in all channels (the left front end and rear surrounds are especially aggressive). The sound of beasts running circles the room, as does the roar of rockets fired toward the Na'vi's Home Tree. The track does not ignore more subtle sound elements either. Softer sounds, from twigs breaking to pens clicking, are equally preserved. Overall, this is a very aggressive track, and it will definitely wake the neighbors. Spanish and French surround tracks are also available, as are English, French and Spanish subtitles. Fox also includes a "Family Audio Track" that removes all objectionable language.

The Avatar: Extended Collector's Edition is packed with informative and entertaining bonus content. The extras are spread over discs two and three.

A Message from Pandora (20:12) is a short documentary chronicling Cameron's work to stop the construction of a dam in South Africa that would have displaced native tribes. This is a fairly compelling piece that proves Cameron puts his money and energy behind his pleas for environmental protection.

Deleted scenes (67:51) - Although these deleted scenes clock in at over an hour, only 45 minutes of the material is new, with the remaining scenes appearing in the film's extended cuts. There is a lot of material here, and nearly all of it is interesting. With a runtime of three hours, Avatar did not need to be any longer, so it is understandable that Cameron had to cut a lot of footage. These deleted scenes appear to be final edits, though much of the effects footage is incomplete. I enjoyed the scenes with RDA head honcho Selfridge. Ribisi did not appear much in the film, and these scenes give him more of a character arc. The Avatar Program scientists also get more screen time in this footage, as do the Na'vi and Sully.

Capturing Avatar (98:26) - This massive four-part documentary from Laurent Bouzereau follows the Avatar production from genesis to release. The documentary is tight and well-edited, and includes a ton of behind-the-scenes footage and interviews. Watching Cameron and the actors work on bare soundstages with some interesting and bulky image-capturing equipment is fascinating. This is one of the best DVD documentaries I have seen, and it is actually worth sitting down to watch. 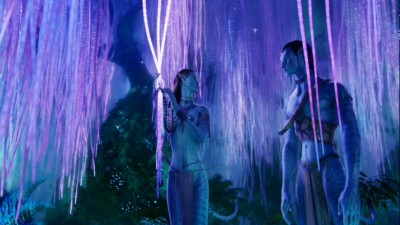 The highest grossing film of all time is bound to have some detractors, but Avatar remains a visually stunning and entertaining film. Cameron's science fiction spectacle fires so much at the screen that one cannot help but feel overwhelmed at the sheer scale of the film. This three-disc Extended Collector's Edition of Avatar is the release fans were craving. With three cuts of the film, fantastic video and audio and a mountain of extras, Avatar: Extended Collector's Edition earns the accolade of DVD Talk Collector Series.