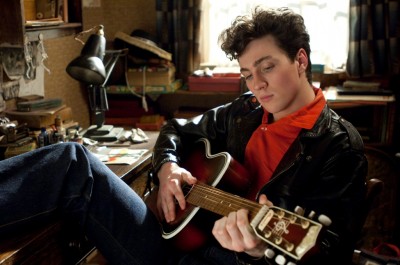 The life and times of John Lennon have been documented on the big screen on several occasions, with each film endeavoring to probe the specialized madness of the reluctantly bespectacled musician who changed the world. "Nowhere Boy" travels back to Lennon's formative years, looking to dramatize the unique domestic quagmire that helped to shape his fractured personality. Occasionally energetic, but primarily frantic, "Nowhere Boy" appears more fascinated with melodrama than investigation, mashing down Lennon's surprisingly complex adolescence into a flavorless paste.

Raised by his fiercely disciplinarian Aunt Mimi (Kristin Scott Thomas), John Lennon (Aaron Johnson, "Kick-Ass") grew to become a rascally teenager, finding difficulty focusing on his education, much to the irritation of his guardian. Ready to confront his distorted past, John seeks out his biological mother Julia (Anne-Marie Duff), a flighty, troubled woman doing her best to drown out her problems with rock 'n' roll and a superficial show of domestic stability. Thrilled to have her son back in her life, Julia takes John in, teaching him guitar and the value of showmanship. John, torn between the consistency of Aunt Mimi and the tumultuous emotion of Julia, turns to music to calm the storm inside his head, forming a band with a pipsqueak named Paul McCartney (Thomas Sangster). 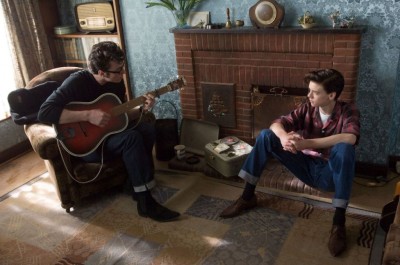 To the film's credit, "Nowhere Boy" does seek out a rare side of Lennon to inspect, stepping back to his hotheaded days of perpetual clowning and mushrooming musical interest. Perhaps not as glamorous a tale as the rise of The Beatles, but an emotional journey worth taking, looking to step inside Lennon's inspirations and uncontrollable urges.

Handed to director Sam Taylor-Wood, a short film ace, "Nowhere Boy" is a scattered experience, working between the difficulties at home and the development of Lennon's interest in sex, with the line blurred a touch by the reintroduction of the flirtatious Julia into his life. Taylor-Wood captures the turbulence of these prime Lennon years, as he struggled to pull his identity out from the wreckage of his life, but the picture lacks needed grit to press the turmoil. The film turns quickly to screaming hysterics to make points of frustration, playing much too primal, breaking the hold of the performances and the struggles at hand. While visual elements are settled and Taylor-Wood shows a great command of soundtrack selections, she doesn't bring a substantial dramatic pause to the picture, diluting the impact by introducing television movie histrionics. 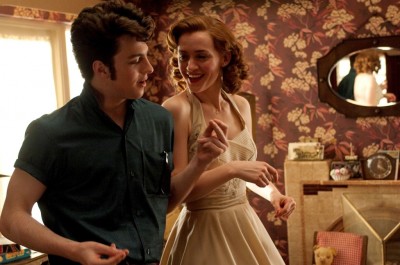 Obviously, The Beatles are touched upon, but it's a distraction, where the more compelling points of the script are found between Aunt Mimi, John, and Julia. A triangle of secrets and resentment, "Nowhere Boy" finds freshness detailing their tentative reunion, nicely brought to life by Thomas and Duff, who supply the film with a bracing sense of discomfort. Johnson's performance is more of a mixed bag, as he's clearly unable to keep up with the rest of the cast. Aside from the fact that Johnson looks nothing like Lennon, the actor lacks a certain working-class edge that sells the desperate leap to rock fame.

"Nowhere Boy" is an uneven film, and perhaps more instructional than enlightening. Still, it's pleasing to find new areas of John Lennon to appreciate, with the picture valuing the drive that took him from a troubled clown to a musical deity.