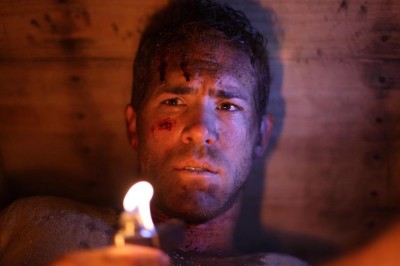 "Buried" is a triumph of filmmaking design, as well as fierce thriller sure to give viewers a serious case of the heebie-jeebies. It's a film situated entirely inside of a coffin, with 85 minutes set aside to watch a sweaty man squirm, panic, and hope without ever seeing the light of day. It takes a truly ingenious filmmaker to pull off a stunt like this without losing his nerve, and Rodrigo Cortes tackles this challenge with exceptional skill, huffing a full can of Hitchcock fumes before plunging into this claustrophobic, ruthless nightmare.

A truck driver hauling supplies through a war zone, Paul Conroy (Ryan Reynolds) has woken up inside of a wood coffin, buried somewhere in the Iraq desert. Left with a lighter, some incidental items, and a cell phone with a rapidly depleting battery, Paul is forced to attack his situation through panicked calls to the outside world, ringing up government agencies and his employer, screaming for help. Finding his pleas answered with cold-blooded stalling techniques from trauma situation pros, Paul grows increasingly desperate, faced with extra pressure from the terrorist organization that put him into the ground, demanding a ransom he cannot pay. As time runs out, Paul's options dwindle, with some hope provided by a government agency that swears they will find and free him. 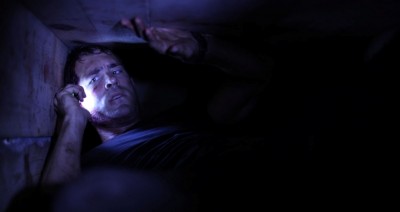 "Buried" is not a film for everyone, tapping into an enormous fear factor that exploits the compacted feeling of being held inside a small space with little oxygen and infinite panic. It's not really a universally approved sensation. However, the film is not a sloppy, budget-minded shocker, but a stylish, measured descent into spastic survival instinct, generously pilfering cues from the masters of thriller cinema, while forging its own identity through the Iraq War setting.

Cortes is a gifted filmmaker, displaying a refreshing dedication to pace that serves "Buried" well. Still a touch too long for such a plot, the picture nevertheless finds a steady rhythm of scares, through both the visceral action inside the coffin and the chilling disconnect of Paul's dead-end phone conversations - highlighting a few potential saviors failing to understand the gravity of the man's situation, while others scramble to cover their own behinds when the legal woes and publicity of Paul's desperation threatens to disrupt daily business. There's a stark commentary on the worthlessness of life during wartime stretched around the horror, with some of the more nail-biting acts of cruelty emerging not from clawing coffin madness, but the suits on the other end of the line, who couldn't care less if Paul perishes. 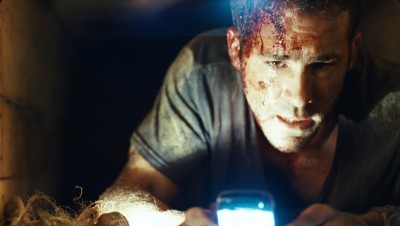 As Cortes's tag-team partner, Ryan Reynolds hurls himself right into the thick of fright, feeling out every last twitch and pant as Paul comes to grasp the severity of the situation. Occupying nearly every frame of this picture, Reynolds faces a monumental acting challenge, asked to communicate the alarm and darkly cheeky attitude of a man who can't locate the help he needs. It's a fire-breathing performance of bloodied vulnerability, allowing the film to drill into the senses instead of merely pasting together some cheap thrills. The viewer is permitted to feel connected to not only the tension, but also the man himself, through Reynolds's masterfully quivering, raging performance.

"Buried" doesn't just stick to phone calls for suspense. Dealing with basic movement limitations, the difficulty with light sources, and, in one of the film's marvelous developments, other inhabitants of the coffin, Cortes keeps the film scurrying along with some nerve-wracking turns of fate, toying with the futility of hope. "Buried" eventually reaches an unbearable peak of agitation, successfully seeing a demanding filmmaking effort and suspenseful endeavor though to the end.