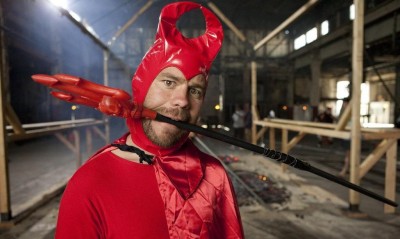 When Johnny Knoxville first began this "Jackass" odyssey, he was a twentysomthing twerp with a big dream of self-destruction. In 2010, Knoxville's kissing 40 years of age, his temples are graying, and his hands seem permanently fixed to his genitals, fully aware of the invitation an uncovered crotch brings around this crew. Where did the time go? The greatest television series MTV ever produced is back for a third and presumably last feature installment, bringing with it the gimmick of 3D to shove the sickening and the bruised into the lap of the audience. The boys are older now, few are wiser, but they still put on one helluva show. And if you like fecal matter, I mean love the stuff, this sequel is the "Avatar" of poop-smeared extravaganzas.

Obviously eschewing any sort of narrative, "Jackass 3D" returns viewers to the framework of stunts, where the boys (Johnny Knoxville, Bam Margera, Steve-O, Chris Pontius, Preston Lacy, Jason "Wee-Man" Acuna, "Danger" Ehren McGhehey, Ryan Dunn, and Dave England) cross the nation in search of a cheap thrill. However, are there really any thrills left for these guys? What testicle-smacking, animal-teasing, nudity-required madness is left to be uncovered? Never underestimate the imagination of this squad, who dream up a fresh assortment of disgusting, uproarious gags, now blessed with the threat of the additional visual space.

Opening with a dazzling introductory sequence set to Twisted Sister's rocker, "The Kids Are Back," the picture establishes its 3D intent immediately, with director Jeff Tremaine staging a colorful display of events that make full use of the dimensional reach. These professional idiots slap each other with fish, take paintballs to the gut, and fly through the air, captured with strikingly clean cinematography and highlighting giddy faces -- finely tuned human reaction machines who, at this point, realize their every cackle translates to box office gold. 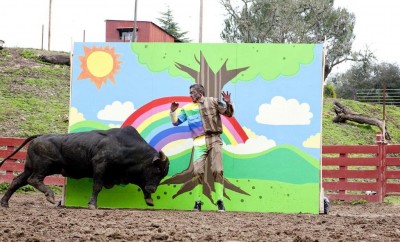 Once settled back on Earth, the crew carries on as usual, assembling stunts that typically lean on either the painful or the repellent. Sometimes both, if we're really lucky. Without changing the formula, fans can expect another round of havoc, watching as Knoxville shares a muddy roller rink with a charging buffalo, Margera is made the fool when dropped into a pit of snakes, and Lacy takes a field goal football straight to the face. There's much madness to ponder here, with the skits enjoying more male nudity than ever before, along with a serious anal fixation that brings about a volcano of fecal matter from England, and a grand finale that sends Steve-O into the sky inside a portable toilet filled with dog excrement. As one might expect, the prospect of facing such a goopy stunt makes Steve-O miserable.

There's urinating, puking, and one monster of a gross-out gag that has Steve-O drinking a cup of fresh sweat from Lacy's heavily exercised body. It's a slightly blunter "Jackass" this time around, absent a needed showstopper that helped the two previous pictures hit eye-watering levels of audience response. Most of these guys have gone Hollywood now, and it shows in the disconnected ambiance of the film. Everyone participates, but Knoxville seems to be the only one enjoying the view anymore. His demonic cackle isn't nearly as forced as the rest of the troupe's. 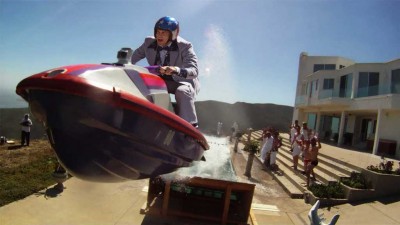 Cameos are provided by The Dudesons, Will the Farter, Seann William Scott, and Will Oldham, while various faces famous in the "Jackass" galaxy return to take a punch (Manny Puig's cameo is all too fleeting). It's all revoltingly wonderful in the moment, yet "Jackass 3D" doesn't hit a sustained comedic note, and I'm crushed to report there's no time spent with Party Boy, Pontius's signature creation. Now that's a crime.

The 3D flourishes are inspired, and it's marvelous to see the team back in action, making life hell for each other once again. They may be old men with big bank accounts now, but when push comes to shove, these clowns still know how to stage one heck of a carnival.