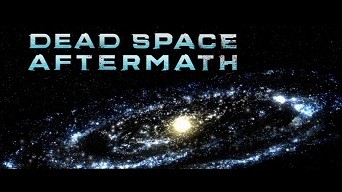 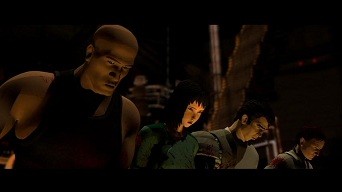 Before I begin this review of Dead Space: Aftermath, I should state that I am not a gamer and have never played the EA Dead Space video games from which this animated film draws its inspiration. I can't assess how this new film compliments the video game series' narrative. I did view, however, its immediate predecessor, the 2008 Dead Space: Downfall. That grim and bloody 72-minute movie, also released through Anchor Bay Entertainment on DVD and Blu-ray, was advertised as a prequel to the original Dead Space videogame - and as such could be seen easily enough as its own work for those unfamiliar with the game.

Dead Space: Downfall involved a mining starship of the future named the Ishimura that extracts a large monolith-ish artifact from an alien planet called Aegis VII. The security chief for the ship, Alyssa Vincent, soon finds herself dealing with a rash of violent deaths involving an alien life form that distorts then inhabits the bodies of dead crewmembers. The story descends into an Alien-style battle for survival, full of gory mayhem and hackneyed dialogue riddled with obscenities. It seemed reminiscent of pulp storytelling one might find in the pages of Heavy Metal Magazine. The audience for the film is likely limited, given its gruesome content, but it was a serviceable time-waster. DVD Talk published several reviews at the time, by Todd Douglass Jr., Thomas Spurlin, and Adam Tyner, if you're interested in reading up about that title.

Dead Space: Aftermath occurs roughly three weeks after the events of Dead Space: Downfall. Some sort of marine unit breaks into a ship called the O'Bannon, where they find four survivors of a crew numbering above 100. The rest have been killed splatter-film style similar to the unfortunate characters in Dead Space: Downfall. The foursome are transported to a space station (I think) called the Sprawl and individually interrogated by ultra-evil people interested in the artifact and its impact on humans. It seems that the O'Bannon had been sent to the planet where the Ishimura had been. The crew had ostensibly been told that they were trying to stabilize Aegis VII, now on the verge of disintegrating from the trauma of the extraction conducted by the Ishimura. But of course, the true nature of the mission was much more sinister. One of the crew finds a shard of the alien artifact - and that leads to a similar outbreak of violence and mayhem as the previous movie.

Dead Space: Aftermath utilizes multiple perspectives to tell its story. The four characters present their experience of the events as each is interrogated in turn. They're forced to endure an artificial recreation of their worst fear before questioning begins, an interesting plot device that is meant to get them more compliant to their inquisitor. In concept, the storyline is solid. However, I found myself agreeing with Adam Tyner who wrote the blu-ray review of this title a couple weeks ago for DVD Talk, the execution leaves a lot to be desired.

Dead Space: Aftermath offers little compelling that hasn't already been done by its predecessor. The pulpy dialogue is still here, full of f-bombs and other obscenities jimmied into the dialogue to the point of absurdity, and thus it often comes across as artificial. Plenty of gruesome carnage occurs, much in the same vein of Dead Space: Downfall, but it too has a "been there done that" feel to it. Even the creepy take on the childhood ditty "Twinkle Twinkle Little Star" gets recycled in this go-round. Admittedly, the tune is used effectively in one of the few genuinely haunting scenes of the movie as a character sees the ghost of his daughter one last time - but once it pops up yet again in the end credits the song's redundant usage loses all impact.

This sequel also makes mistakes the original did not. Here, for instance, the animation style varies through the course of the movie, a method that the animated Dante's Inferno utilized as well. Personally, I think this variation in animation works better for anthology-style storytelling. As in Dante's Inferno, it's frankly disconcerting to see characters change appearance throughout the movie.

Ultimately, Dead Space: Aftermath felt less like a film independent of its source video game than Dead Space: Downfall did. While both offer up bleak endings, Dead Space: Aftermath's concluding scene is much less satisfying in summing up the experience as a whole, suggesting more to follow (which I'm guessing the Dead Space 2 video game will do?). The 78-minute film, therefore, feels more like a runaround of familiar storytelling elements and a lengthy commercial. As I said at the start, I can't comment upon how this sequel compliments the video game series (though it certainly relies heavily upon a viewer's knowledge of Dead Space: Downfall), but taken on its own, it seems perfunctory at best. Rent it only if you're interested. 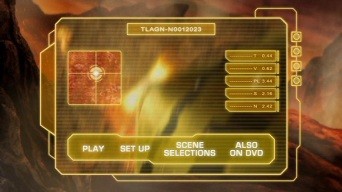 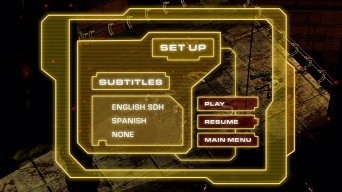 Anchor Bay gives Dead Space: Aftermath an anamorphic widescreen presentation with a 2.40:1 aspect ratio. Modern animation tends to look great on DVD and blu-ray, and this title was no exception. Colors are strong, and details are sharp.

The sole audio track is an English language Dolby Digital 5.1 production. The sound effects come off very nicely - and dialogue is, for the most part, well-represented. Optional subtitles are available in Spanish and English for the Deaf & Hearing Impaired.

A game trailer for Dead Space 2 precedes the main menu. It's also accessible via an Also On DVD sub-menu (yeah, I know that title's a bit off) along with actual movie trailers for Dante's Inferno, Let Me In, and The Bleeding. And that's it for extras, which is too bad. A featurette on the Dead Space video games would have been nice for us non-gamers to have more context on the Dead Space universe.

Dead Space: Aftermath retreads a lot of elements from its predecessor, Dead Space: Downfall, giving it a "been there done that" feel. The over-the-top violence and profanity is here, but it comes across as perfunctory at best. Given the disc's lack of significant extras, the best I could suggest is to rent the movie if you're curious - or a fan of the Dead Space video game series.