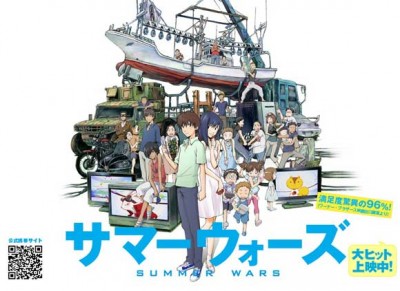 Out of all the anime films I have seen in the past several years this is one of those rare gems that truly impresses on every level.  Summer Wars should be able to stand out in a crowd of productions as one of the greatest achievements of the current times. Only those anime masterworks by Studio Ghibli (such as Miyazaki's recent effort and masterpiece Ponyo) would rank higher for me than this exuberantly spirited outing about the strength and importance of a family unit. On the surface of the film is a story about technology and the way in which it shapes us in our everyday lives.

The start of the film introduces us to Kenji Koiso, who we quickly realize is a bit of a nerd when it comes to computers. He is absorbed in working a part time job that plugs him into the online world of 'Oz', an online system that seems to control almost every aspect of the modern society in the film. Think of the Oz landscape as a supercomputer capable of doing almost anything with limitless potential for creating advancements for the future of mankind. Such a thought is both undeniably intriguing and scary at the same time. Things are going to change quickly for Kenji though when he is taken on a wild ride that will change him forever over the strange path he takes during the course of the film. A girl named Natsuki comes by during his part time gig and offers a job opportunity for the summer. It is clear from the onset that Kenji has a crush on Natsuki. He accepts the job offer without even knowing what it actually is first.

Kenji ends up being a part of a family reunion where Natsuki wants him to pretend to be her boyfriend.   From that point forward we are introduced to the wide variety of characters in the family - including the grandmother who is the entire point behind the reunion (her 90th birthday is upcoming). This is perhaps the coolest grandmother character that I have ever seen in a film (animated or otherwise), a badass who is willing to speak her mind and be both sympathetic and entirely strong-willed when needed. Things are not going to stay calm for Kenji, Natsuki, the grandmother, or any of the other family members for long. When the online world of Oz is somehow hacked into the real world is affected across the entire globe. Kenji and the others must figure out how to set things right and bring a balance to their real and online worlds before it's too late (and as a strange program begins to wreak havoc in the online Oz world).  As everyone in the household works together to try and remedy the situation the special bonds that are created seem to grow and develop.  Technology is something that often overshadowing our human bonds - but in this film the tables are turned and the crisis surrounding Oz creates a role reversal where the technology instead helps to unite us in a common goal rather than by bringing us even further apart.

When I first heard about the film I had a suspicion that it might occasionally feel overcrowded with too much of an emphasis placed on the technology of the Oz online community that was being presented.  As it turns out, I had little to worry about in that regard. The screenplay by Satoko Okudera provides a great balance between the events taking place inside of Oz (where humans can use 'avatars' to navigate this sci-fi world) and the normal lives people have outside of the online realm.  An area of the screenplay that genuinely surprised me was how a focus was placed on demonstrating how dangerous it can be for any society to rely too heavily on technology alone. What would happen to a society in which everything was run through a single portal connecting every aspect of our world's technological advancements? If something like that were to crash we would have the potential to be entirely "D-O-O-M-E-D" (so to speak). The film warns of that risk by showing an increasingly connected online word. In subtle ways the script aims to remind our world to not get lost while moving towards the future and to take a few moments to breath in the nostalgic air of the times we had before computers.

Despite all of my enormous praise for this film, I find it important to also detail the few minor qualms I had with the film.  There is a plot element used in which a core character is arrested and suspected as the cause of the hacked into Oz world. This element seemed somewhat brushed over far too quickly, and was somewhat disappointing in how it was resolved. Another element that I found puzzling was the quick jump to the battle inside of the Oz system in which a card game is used to help determine the fate of all humanity. I thought that could have been handled a little bit smoother with a stronger transition. These elements seemed like minor hiccups in what was a nearly flawless film. 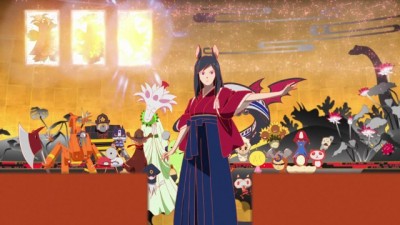 This was one of those rare films I anticipated seeing and experiencing for many months. This was in part a result of the breathtaking imagery on display in every trailer I saw for the film and it was also a credit to the director (Mamoru Hosoda), who was already being heralded for his work directing The Girl Who Leapt Through Time, another feature-length effort. I was familiar with his earlier work on the anime series Digimon (which is one of my childhood favorites) and as a result I was genuinely curious to see his transition from small screen spectacle to the huge productions elements which would surely be on display with Summer Wars.  Having now seen the film I am filled with joy to say that the imagery never disappointed me for even a single nanosecond. I was amazed from one moment to the next. Summer Wars has beautiful animation that will enrapture and bewitch most viewers from the start to finish.

Perhaps the most important reason behind why this is such a worthwhile film is that the story is focused on an element that has long been forgotten by many film-makers of today: the unmistakably importance of family. Our global culture needs more movies to emphasize that element. The film accomplished this with so much style and substance that it feels like a gift to the world. I hope that Summer Wars is seen as a noteworthy work of art by audiences worldwide and that it helps brings in new fans to the anime medium in which the story was told.

The film is presented in 1080p with a strong AVC encoded transfer presenting the film in it's original aspect ratio of 1:85:1 widescreen. There are no noticeable issues with the transfer -- certainly nothing that will distract from a fantastic visual experience: the colors are strong, the detail presented is accurate, and during both the traditional and CG-heavy sequences the film manages to look stunning. The animation occasionally looks a little bit soft, but only ever-so-slightly. This is one of the better presentations I have seen on Blu-ray thus far for an anime release.

Funimation presents Summer Wars on Blu-ray with both English and Japanese language 5.1 Surround Sound mixes encoded with Dolby TrueHD audio for either listening option. That knowledge should help to remove some of the debate over which option is the best for experiencing the film. Personally, I prefer listening to the Japanese dub but either option would probably work for most casual audiences.  The sound is immersive throughout but the action-heavy scenes tend to sound significantly more impressive than the more dialogue focused real-world scenes. English subtitles are included.

The bulk of the extras consist of some stellar but relatively shorter interviews with Voice Actors involved in the Japanese dub of the film. The Interviewees are Ryunosuke Kamiki, Nanami Sakuraba, Mitsuki Tanimura, Ayumu Saito, and Sumiko Fuji. Each actor offers some different background information behind how they were cast for their parts and if they have had any experience before in voice acting or film acting. Several cast members explained what their opinions were on the story and themes of the film. I found each speaker to be thoroughly engaging and only wish these interviews could have lasted longer as I was enjoying the experience of getting insights from them. Director Mamoru Hosoda is also featured in an interview that appears to have been taken when the film was being screened at a film festival. In addition to answering questions about Summer Wars he discusses The Girl Who Leapt Through Time. An assortment of TV spots, teasers, and the original trailers are also included.  Lastly, Funimation continues to provide trailers for upcoming releases. The extras total up to a run-time of about 40 minutes.

Summer Wars is an excellent anime film with stellar direction, an intelligent screenplay, and impressive animation. It should not be missed by anyone who considers themselves an anime fan and it would also be worth a look for those who are unfamiliar with what the medium has to offer. This heartwarming tale about family bonds and the importance of reflecting on the past in our digital age is easy to endorse for all of its winning qualities. Highly Recommended.