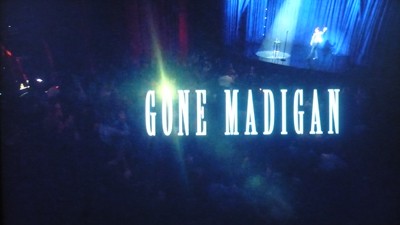 
The Show
Kathleen Madigan has been active on the comedy scene for quite a while now, running alongside legendary curmudgeon Lewis Black as a grim pairing that makes people smile. Mixing a touch of current events with a healthy dose of pop culture and a lot of personal material, she touches a lot of bases, which makes her accessible to plenty of audiences, keeping things smart, but with a definite voice for the common man, as evidenced by her spot touring for the USO with Kid Rock and Kellie Pickler (which gives her some funny stories to share in this special.) It's hard to pin her down to a certain element, as she covers a wide range of topics, including everything from the relationship between Obama and Hillary Clinton to Oprah Winfrey's disappointing shows (one of the best moments of the special) to casinos and gay marriage.

Perhaps it's the effect of spending a lot of time around Black, but much of Madigan's act, captured here in a 64-minute performance in New York City's Gramercy Theater, is infused with a slightly world-weary smugness and disbelief at the world around her. Looking at her as she talks about touring a Mormon temple or having an affair with a woman in her 40s, you get the feel like she's an older Lindsey Lohan, perhaps a former party girl who has learned a bit over time, and her experience has given her a solid perspective on the world, which combined with her sense of humor makes her a fun listen. Her riffs on Sarah Palin and her family have that tinge of "Get a load of this..." that can work very well in stand-up, along with a lot of big-picture observational material in play, like her thoughts on women in casinos. 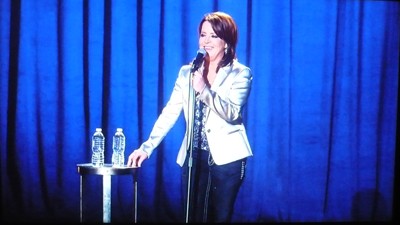 Though I mostly agree with the slightly-insulting Jay Leno quote on the box, which names her the funniest female stand-up today, there are a few things about her act that I don't enjoy, and are the reasons I don't count her among my comedic favorites. First among them would be the lack of flow in her delivery. Almost every segment is very much of its own space, practically needing a direct "and now let's talk about how banks don't stay open" type of segue. The best stand-ups, in my opinion, move and link like a fine musician, but here, it's set-up, joke, set-up joke, more often than not. This may also be why I can't remember much of her act, the way I can a Patton Oswalt or an Elvira Kurt, where the nearly-melodic sound of their delivery enhances the comedy.

The other issue, and it's a surprising one to me, is the way she uses stereotypical vocal imitations to sell the occasional weak gag, like her Asian inflection on the Chinese family who moves into a family's house without them noticing at first, or the obviously black voices used on the TSA worker bit and the bank guard. I'm not someone who gets bothered much by politically incorrect comedy, but something about these segments didn't sit right with me, possibly because they felt too easy for Madigan, or perhaps beneath her. Especially when she utilizes a talent for voices in other bits. I think it was in Private Parts when a Chinese guy tells him "You make funny. Not make fun." That's a pretty good way to put it, and when Madigan is making funny, she does a good job at it. 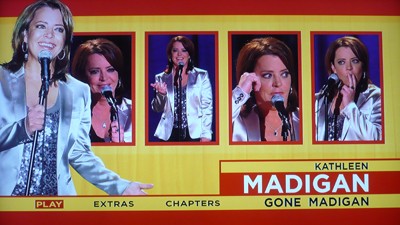 The Blu-Ray Disc
This one-disc release is packed in a standard BR case (though a locking one) and features a rather simple menus with options to watch the show, select scenes and check out the extras. There are no audio options, no subtitles and no closed captioning.

The Quality
The 1.78:1 transfer (1080i/AVC) is a definite disappointment, lacking in the clean image that marks Blu-Ray releases. It starts with the special itself, as the two main angles are oddly soft and blurry in comparison with the other angles, while the whole show is a touch light in terms of the level of detail. But beyond that, there's a lot of noise and noticeable compression artifacts in the video, especially in the blue curtains behind Madigan, which buzz a lot. At least the colors are bright and appropriate.

Unlike the video, the 5.1 DTS-HD Master Audio presentation is actually pretty nice, with Madigan's voice coming across nice and clean. The overall delivery puts your right in the middle of the room, hearing Madigan in the center channel, while echos of her voice are in the side and rear channels, while the audience joins you there as well. A nice immersive experience.

The Extras
The Interview runs 3:41, and is not really an interview. It's just Madigan going through her notes, complaining about her sinuses and her lack of organization. It's not too different from being another bit from the "Behind the Scenes" segments, which are much longer, at 15:26. The only difference being the lack of her family, since behind the scenes mainly means chatting with those related to her, with the exception of the presence of her pal Lewis Black. It's somewhat unremarkable, outside of a bizarre musical number by Madigan's parents. 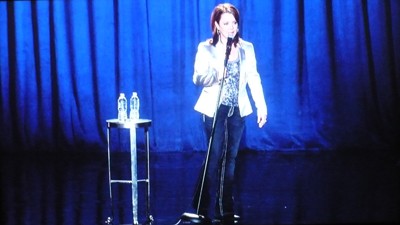 The Bottom Line
Madigan's a fun comic, and her delivery is nicely energetic, but after watching her special twice, I had difficulty remembering many of her bits, in part because they lack that something special that makes for a memorable act (outside of the many voices she uses.) But at least while you're watching you'll smile and laugh. The disc looks OK and sounds very nice, but the extras are disappointing, which makes it hard to recommend the admittedly small difference in price from the DVD. A purchase is recommended only for big fans of her act.