I couldn't resist when this DVD turned up in our screener pool. I mean, Trek Stars Go West? And just look at that DVD cover art - ingenious! It's a wonderfully amusing, appealing concept, and given the obsessive-collector nature of many Star Trek fans, this would seem the sort of thing that might very well sell at fan conventions for years and years - and with no need to licensing anything from Paramount Pictures to boot.

The two-disc set is a hodgepodge of public domain material each featuring one regular cast member from the original Star Trek (1966-69). Most of this material consists of episodic TV Westerns from the late-1950s and early '60s, though one entire feature film is included, the mind-bogglingly awful White Comanche (also known as Rio Hondo, 1968), starring William Shatner in a dual role.

Most of this has been available from public domain labels before. The earliest offering, a September 1949 episode of The Lone Ranger (featuring DeForest Kelley) was released as part of an officially licensed set of Lone Ranger episodes by Classic Media in 2009. Another excerpted series, Tate, was released by Timeless Media Group in back in 2007. Tellingly, this is really the only episode that looks good.

Unfortunately, most everything has been badly authored, looking extremely mediocre at best and unwatchably poor at worst. Most of it appears to be derived from recycled, nth-generation tape masters with very poor contrast and which are generally quite soft. These PD outfits rarely work from even 16mm TV prints anymore - most of this stuff is derived from overworked beta-masters. The authoring is notable for its blocky, eye-straining artifacting throughout. White Comanche, intended for 1.66:1 or 1.85:1 cropping, is full frame.

Back at the dawn of DVD a dozen years ago, such imperfections wouldn't be deal-killers given the unusual, goofy nature of a set like this. But nowadays a large percentage of those reading this review are watching movies and TV shows on Blu-ray, or via high-def broadcasts. Even if you watch high-def programming 90% of the time, a well-mastered set of black and white TV shows on standard-def DVD, like the recent Have Gun - Will Travels and Gunsmokes from CBS-Paramount, still play just fine. But PD offerings that once seemed barely-acceptable to die-hard fans of old movies and obscure TV shows are quickly losing even their once minimal, let's-keep-this-as-a-file-copy-until-something-better-comes-along appeal. Even a title as clever as Trek Stars Go West. 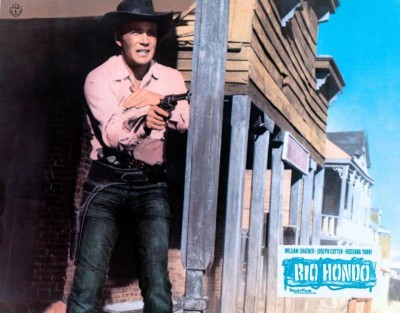 For the record, here's what's included:

"Comanche Scalps" - an August 10, 1960 episode of Tate
Leonard Nimoy is fourth-billed in the cast of this show written by series creator Harry Julian Fink, which is more a showcase for rising star Robert Redford, actually quite good. This is really the only watchable program in the entire set, and made me eager to see more of the official release from Timeless Media.

"The Ape" - a December 17, 1960 episode of Bonanza
Nimoy is back, this time as a cardsharp sharing scenes with a sharp of another sort, sexy Karen Sharpe (later Karen Kramer, director Stanley's wife), playing a saloon girl, but mainly this concerns his manipulations of a Lennie-like brute, Arnie "The Ape" Guthrie (Cal Bolder), with Hoss (Dan Blocker) in the George mentor-role (!). (I confess to being disappointed when it became clear a man-in-an-ape-skin was not forthcoming.) The packaging fails to mention that the show was written by another name familiar to Star Trek fans, Gene L. Coon. Good color but terrible artifacting. As with other PD episodes of Bonanza, the iconic (and copyright-protected) theme song is missing, replaced by generic scoring.

"The Legend of the Old-Timers" - a September 8, 1949 episode of The Lone Ranger
Disc Two gets off to a feeble start with this Lone Ranger episode featuring DeForest Kelley, then a prolific actor in Westerns and, especially, prime-cut film noir. The episode itself, one of the first in one of the first TV Westerns, is just fine, but viewers are better off seeking out Classic Media's official Lone Ranger Collection instead.

"Way Station" - a July 17, 1957 episode of The Last of the Mohicans
This offering shows some interest by the disc's producers, as it begins with a short excerpt of James "Scotty" Doohan's brief walk-on in the previous episode, "Scapegoat," which is then followed by the complete "Way Station." A nice touch. The episode also features Lon Chaney, Jr., but the image quality is poor.

"Shorty" - a November 3, 1960 episode of Outlaws
Cardsharp Leonard Nimoy is back - way down in the cast list but interestingly just a few weeks before playing that similar role on Bonanza - in this episode featuring Alfred Ryder (who also guested on Star Trek's first broadcasted episode, "Man Trap") and Edward Binns. Picture quality is poor.

White Comanche (1968)
Unlike everything else, this was actually made during Star Trek's run, presumably between the second and third seasons. A Spanish Western with Shatner and Joseph Cotten the only "names" in the cast, this is extraordinarily cheap and clunky, to the point of amateurish, and credited to director José Briz Méndez. It's hard to resist a film in which Shatner, then at his most indulgent performance-wise, playing contrasting half-brothers: good guy cowboy Johnny Moon and half-Indian, all-psychotic Notah. Sorry to say the picture quality is as bad as other PD Western collections that have included this movie: poor.

See above for general and episode-specific comments. In short, the Video/Audio quality is mediocre to poor with the exception of the Tate episode, and while I wouldn't want to accuse the disc's producers of pinching this from another source, the sharp contrast in picture quality between this and the other episodes does raise eyebrows. The sound quality is in tandem with the picture; the worse the video, generally so too is the audio. There are no Extra Features

Trek Stars Go West gets my nomination as the best DVD cover of 2010; it's a swell idea, but badly executed, not up to the level of its funny and imaginative cover art. Skip It.