Fox // PG // October 5, 2010
List Price: $22.98 [Buy now and save at Amazon]
Review by Kurt Dahlke | posted December 24, 2010 | E-mail the Author
Space Chimps 2: Zartog Strikes Back:
You don't get credentials like mine reviewing only movies you're comfortable with. Lord knows I've done my share of heavy lifting; between specific interest movies with subjects I know nothing about and unauthorized biographies of Miley Cyrus, I have challenged myself. I realize now I'm not even close to having met my match. For instance, I'm watching a CGI action/comedy aimed at 8-year-old boys. It's called Space Chimps 2 - what the hell was I thinking? And yet ... I'm oddly compelled ...

I mean, I haven't even seen the original Space Chimps! (Don't worry, the first two minutes involves recapping the first movie.) After we're up-to-speed, most of us will still wonder why there is an inner department at NASA involving chimps operating rockets and terraforming planets, but we'll certainly feel concern as totally unqualified mission control monkey Comet accidentally launches himself in a rocket. Luckily, Comet's plucky buddy chimps immediately leap to the rescue. Yet you needn't fear that you're missing the full entertainment value you might get from a 75-minute kid's movie, because you get two involved sub-plots; a comic bit with evil alien Zartog bent on revenge (voiced by Kelsey Grammer sound-alike John DiMaggio), and an odd romance between Comet and a hydro encephalic sea-monkey named Kilowatt. 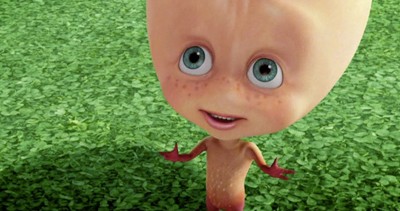 To my surprise, Chimps 2 turns out to be rather compelling. Not exactly on a narrative level or anything, the plot's really pretty basic, but more due to its gleeful imagination and smooth pacing. For you stoners out there, it also seems extremely 420 friendly. Regular shifts between Comet's adventures in space and Zartog's misadventures on Earth every 4 minutes mean your attention is constantly brought back on point. These shifts are even more arresting due to wild tonal adjustments. On Earth, Comet's team acts sassy, and Zartog scurries about in true cartoon fashion, suffering many of the same torments as Wile. E. Coyote. These scenes also enjoy judicious use of pop-culture jokes and plenty of non sequitur tomfoolery. It's all pretty amusing, engaging, and nicely un-challenging. Things are different on Kilowatt's planet, Malgor, though.

Here, and on his impromptu space flight, Comet spends many quiet moments gazing in blissful wonder at the stars, or Malgor's fantastic flora and fauna, while blissful new-agey music or sweet pop tunes play on the soundtrack. It's enough to make one want to kick back and space out. Of course just as we're about to drift off, the plot shifts back to Earth again. But before that happens, Comet and Kilowatt engage in rhapsodic playtime, hopping on huge, rubbery red-and-white spotted mushrooms - bouncy 'shrooms, they call them - or riding giant purple manta rays through the sky. Meanwhile, back on Earth, one of the human scientists in charge of the monkeys, a skinny Indian nebbish named Dr. Jagu, busts out an improbable bit of funk dancing that goes on for three minutes. 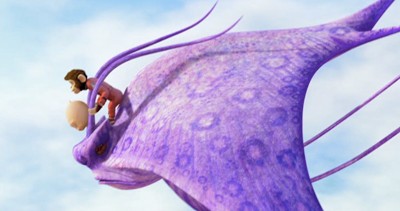 I'd say, "you can't make this stuff up," so there it is on the screen, to delight your pre-adolescent children, and any adults watching who may have managed to temporarily devolve to a similar state. Though crafted with healthy dollops of Nickelodeon Teen Sit-com timing and attitude, Space Chimps 2 throws numerous bones at adult genre fans; references to 2001: A Space Odyssey, On-Star, and a crash-landing that's sublimely silly will keep parents on their toes. Ultimately predictable, and surprisingly relaxed for what is actually a frenetic kids' movie, Space Chimps 2 in all its CG-Alien glory is probably what Avatar should have been: fun and unpretentious.

Video:
Our screener check disc does not represent final product, but the 1.85:1 ratio presentation certainly looks ravishing in this form, with super-bright colors, too. We'll update our assessment upon receipt of final product.

Sound:
Neither does our screener represent true Dolby Digital 5.1 Audio quality, but the music sounds really good, and we'll let you know about the rest when the time comes.

Extras:
Sadly, we just get two extras. Strangely, I liked them both. A "Liftoff" Music Video by Shada (including the gent who gives voice to Comet) is four minutes of energetic pop rock. Not to get too deep into it, but this riff-oriented song (the bulk of the tune grinds along with one "American Woman"-style riff) shows tons of creative promise that seems to battle with what is likely a label-imposed pop-rock sheen. Jagu's Dance - Alternate is basically the same routine with a different backing song, one that conflicts with Jagu's patter.

Final Thoughts:
Space Chimps 2 - Zartog Strikes Back won't be stirring up the Golden Globes, it's a silly kids' movie. And it has a chimp that looks strangely like Courtney Cox. But with a relaxed attitude; compelling, beautiful visuals, clever humor and lots of stuff to please the late-night crowd, this is one movie with the potential to bust boundaries. While I can't say more than Rent It, I say so heartily.