"The Social Network" marks the second time in a row David Fincher has stepped outside the "thriller" genre. However, that doesn't prevent the film, adapted from the book "The Accidental Billionaires" by the sharp mind and pen of writer Aaron Sorkin from providing audiences with a tale of betrayal, tragedy, and legal intrigue. Set aside any groans at the thought of a movie about Facebook, as the now ubiquitous site is merely an element; the heart of the story is the creative rise and emotional fall of Mark Zuckerberg, a character obviously embellished for the film, as any interview will show you the real man, doesn't come off as nearly interesting. 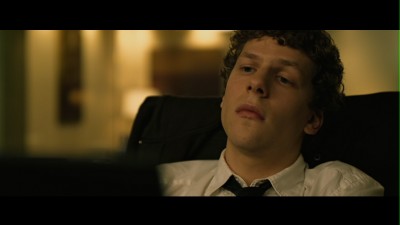 I will fully admit, the film didn't wow me on my first viewing. I found it to be a well-paced, interesting look at a group of rich, entitled elitists squabbling over money and friendships. However, on subsequent viewings, the quiet genius of Fincher as an artist springs forward and some of the film's most brilliant aspects are the elements viewers often take for granted. The film is still centered on affluent college students and this is not an easy sell on audiences, however, I defy anyone to not find an element of tragedy in the film version of Zuckerberg. Jesse Eisenberg, most known for his awkward Michael Cera-esque impersonation (only not irritating like Cera) in the very funny "Zombieland" is a sheer force of nature, capturing the hyperactive genius of Zuckerberg in the form of an emotionally needy, insecure figure who awkwardly reaches out through relatively antisocial behavior. From the opening scene where he turns his underhanded browbeating of soon to be ex-girlfriend, Erica Albright (Rooney Mara) into blatant, holier than thou insults, to the final moments of the film as a financially wealthy but socially destitute man in an empty office, Eisenberg's effortless approach to acting is worth the price of admission alone.


While I still feel Casey Affleck's chilling turn in "The Killer Inside Me" has the edge of 2010's best male performance, Eisenberg is closely at his heels. In bringing to life this tragic character, Eisenberg is paired off with several strong supporting performances to help cement his own social isolation. Andrew Garfield is, in what is likely a very unpopular opinion, the one weak point in the film, as Zuckerberg's one true friend Eduardo Saverin. Tasked with being the financial backer behind The Facebook, Garfield's performance is overly naive for a character that supposedly makes $300,000 on stock trades during the summer. Outwardly eager for his own social acceptance in Harvard's elite "final groups," Saverin's continued childlike bragging of his own social rise, even in the face of Zuckerberg's continued underhanded jabs, makes sympathy for the character hard to come by. Had Garfield exerted more confidence in the role earlier on, I might have bought into his plight more, but at the end of the day, Saverin is largely to blame for his own woes, and his growing of a backbone at the end of the film is too little too late. 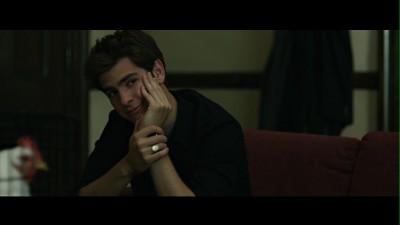 The foil to Saverin's "goody two shoes" routine is the slick and paranoid Sean Parker, handled with charm and sleazy by Justin Timberlake. Parker serves as the catalyst for Zuckerberg making the site more than just an on-campus diversion; he provides Zuckerberg with the vision for the most exclusive social gathering on the internet, taking a lonely, motivated nerd, and giving him a chance to have power beyond anything a Harvard club could offer. In the process, Parker cements a spot in the founding of the company for monetary reasons, and is the wedge between Saverin and Zuckerberg, despite Zuckerberg's own apparent apathy towards wealth. However, as complicated as the intrigue between the main trio sounds, Sorkin manages to weave the other half of the story in seamlessly, in the form of Zuckerberg's foes, Divya Narenda and the Winklevoss Twins.


As stated previously, "The Social Network" has an element of legal drama to it. Fincher and Sorkin use the dual lawsuits Zuckerberg is embroiled in as the backbone of the story, continually flashing back on elements mentioned in the ongoing depositions, and expanding on them in extended fashion. All parties cross paths directly or indirectly through the launch of Facebook, with Zuckerberg accused of stealing the idea from Narenda and the Winklevii. Although limited in screen time, the Winklevoss boys, Tyler and Cameron make a huge impact, played via the use of truly amazing CGI facial replacement by Armie Hammer with Josh Pearce as the body double. Hammer is tremendously underrated in the film, interacting essentially with himself and managing to create two identical characters that are subtle enough in personality to be easily distinguishable on screen. The film's most humorous moments come with Hammer bickering with himself over whether it is unbecoming of a Harvard man to sue Zuckerberg for what they feel is theft of their idea. One of the most memorable scenes of the film comes as they secure a meeting with the president of Harvard, only to be met with a response, that is best not spoiled, but a testament to Sorkin's sharp wit. 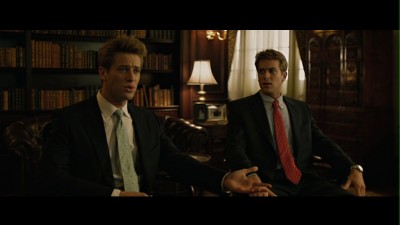 Holding these carefully plotted interactions together is the glue of Fincher's direction and the assistance of cinematographer Jeff Cronenweth. "The Social Network" is a very polished looking film, not visually flashy, but instead dignified in design, sporting a modern edge and editing that manages to expertly pace the film, unlike I've ever seen before. The first 45 minutes of the film take place over a few months, culminating with the site going live, while the remaining 75 take place over what appears to be a year, and how Fincher managed to just slow down the pace of that second section of story so smoothly is incomprehensible genius. The icing on the cake is the very un-Reznor like score from Trent Reznor and Atticus Ross; while there are elements of the music that Reznor fans will recognize, it is at times very conventional for the style of film, but incredibly unique in how deep the themes are built. It's vital part of the film as a whole that will be overlooked on an initial viewing, because like so many other aspects of the film, it is a perfect fit.


"The Social Network" isn't David Fincher's best film, but that doesn't make it any less compelling or masterful. While the final product has a few missteps: the "whiny" Saverin and a some false tension in the legal proceedings, it's a much better film than any film about Facebook should actually be. Fincher brings Sorkin's excellent screenplay to completion on-screen and in the process gives audiences a cautionary tale of a very flawed man wanting to belong, and the utter irony in bringing millions together online, while pushing the few he had away, all while making a bon-a-fide star of Jesse Eisenberg, a young actor with an astronomically bright future. In short, exactly what we expect from David Fincher. 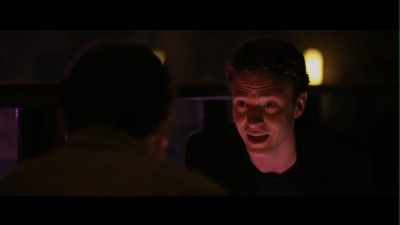 
The film is presented with a 2.40:1 anamorphic widescreen transfer, capturing the eye pleasing visual look of the film almost perfectly. A minor, but noticeable amount of edge enhancement and a few minor instances of DNR are the only red marks on report card of perfect grades. Colors are perfect from scene to scene, reproducing the unique lighting choices spot on, from the dingy warmness of Zuckerberg's dorm, to the bright, sunny exteriors of the rented home in California. Contrast levels, especially during some dimly lit sequences, ensure the proper amount of detail makes it's way out of the backgrounds, while the detail level itself is strong, matching the often soft look of scenes when necessary.


The English Dolby Digital 5.1 audio track is phenomenal, capturing the murmuring crowd in the opening scene, the hollowness of the conference rooms in the deposition scenes, and all the nuances of Reznor and Ross' score. The pivotal club scene between Zuckerberg and Parker is near reference quality, with the driving intense beat of the dance music dominating, but the strained, but crystal clear dialogue between the two making viewers truly feel like they are in the club with them. A French 5.1 track is provided as well as a 5.1 English Descriptive Audio track for the visually impaired. English French, and Spanish subtitles are included as well as English subtitles for the hearing impaired.


The first disc features two feature-length commentaries. The first and arguably best is with David Fincher. Fincher is very candid and interesting to listen to, as always. Sony however, in an instance of stupidity, has chosen to censor Fincher's use of profanity, despite the disclaimer on the package stating special features are not rated. Also worth listening to, is the second track with writer Aaron Sorkin and stars Jesse Eisenberg, Andrew Garfield, Justin Timberlake, Armie Hammer, and Josh Pence.


On the second disc of the set, an exhaustive set of special features opens with a 90-minute feature length documentary on the production of the film titled "How'd They Make a Movie On Facebook?" It's a fantastic supplement to the Fincher commentary and the type of behind-the-scenes look that seems like a distant memory on DVDs. This is not self-congratulatory studio fluff; it's real and it's informative. As with the commentary, certain profanities are censored.


A series of featurettes rounds out the disc. "Jeff Cronenweth and David Fincher On The Visuals" runs nearly eight minutes and discusses the look of the film including lighting and filming. "Angus Wall, Kirk Baxter, and Ren Klyce On Post" is a little over 15-minute glimpse at post-production work, especially editing and selection of final takes. "Trent Reznor, Atticus Ross, and David Fincher on the Score" is a roughly 20-minute segment on the scoring, from the actual recording process, to Reznor reflecting on his first feature film score. It's incredibly an incredibly insightful look into the process. "In the Hall of the Mountain King: Music Exploration" consists of four, increasingly evolving audio tracks ultimately used in the rowing race montage. "Swarmatron" is four-minutes of footage of Reznor using the uniquely electronic, custom-built instrument and discussing its use.


Finally, there's the "Ruby Skye VIP Room: Multi-Angle Scene Breakdown" is multi-angle feature on the shooting of the film's club sequence between Parker and Zuckerberg. Viewers can switch between rehearsal footage, behind-the-scenes interviews, tech scouting, and principal photography as well as the accompanying audio tracks. There's also an option to view all four angles and custom select audio. It's the perfect encapsulation of how detailed the filmmaking process is, in just one specific scene.

"The Social Network" is a well-crafted tragedy revolving around Mark Zuckerberg's cementation in history. Viewers need to approach the film as its own entity, disregarding what they know about the "true" story, and instead accept the film as it should be, inspired by those true events. The highlight of the film is Jesse Eisenberg, the lynchpin in a weave of betrayals and successes, wrapped in a smart package by Fincher himself. The DVD will easily make the top 10 releases lists of 2011, with its quality approach to supplements and stellar A/V quality. DVD Talk Collector Series.