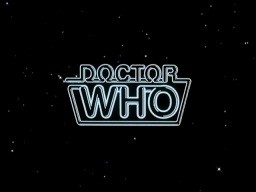 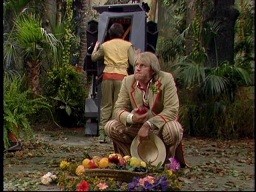 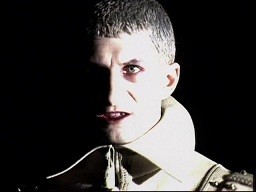 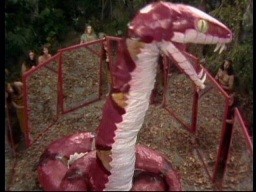 Kinda was a four-episode serial that occurred during Peter Davison (the Fifth Doctor)'s first year as the Time Lord back in 1981-1982. It is vintage Doctor Who of its time: in both the good and bad sense. Kinda has a compelling story but it's let down by one of the cheesiest endings in memory from the original series (and boy, that's saying something). Yes, long-time Doctor Who fans may remember Kinda as the story where the Fifth Doctor helps alien primitives fight a giant balloon snake with mirrors. Curious? Then read on, my friend.

In Kinda, the Fifth Doctor and his companions Tegan, Nyssa, and Adric (the 1981 TARDIS crew was one of the show's largest) land on the seemingly idyllic jungle world of Deva Loka. Nyssa (played by Sarah Sutton) is written out of the story at the start - it seems she has a severe headache and remains on board the TARDIS to recuperate. This leaves Adric and Tegan to find trouble with the Doctor, which inevitably happens in Doctor Who. And this time Tegan really steps in it as she falls asleep near some wind chimes and is possessed by the ancient evil entity known as the Mara. This leads to the highlight of these episodes: a lengthy mind game (or mindf--k, as modern parlance would have it) between Tegan and the Mara within her dream.

On this planet, meanwhile, the primitive population appears to have no need for shelter, as their habitat offers neither dangerous predator nor in clement weather. Perhaps this is why the planet has also caught the eye of a scientific team from the Earth of our future interested in seeing if the planet is suitable for colonization. However, several of the Earth crewmembers have gone missing, and the remaining humans are near the breaking point. Enter the Fifth Doctor and Adric, and the plot starts to weave its strands together.

It has probably been 25 years since I last saw Kinda - and I think I like the story now more than I did when I was young. The plot is fairly intricate; it apparently borrows from Buddhism quite a bit, but greater minds than mine have explained this connection so I won't dwell on it here. The Mara is an impressive "ancient evil trope" character, and his dialogue with Tegan in the early episodes is insidious. The remaining Earth colonists are actually interesting characters, especially Todd (played by Nerys Hughes), a scientist. Todd is a smart and capable woman, and more than adequately serves as replacement foil for Nyssa in her interactions with the Fifth Doctor. The Kinda primitives also have an interesting gender power dynamic: the women can talk but the men cannot. Plus, they share an interrelated telepathy. I would have liked to have seen these episodes explore this alien race further than they do.

Still, this is Doctor Who and what would the original run of Doctor Who be without its memorable (even if for the wrong reasons) tech and monsters? Kinda offers both in spades. For instance, the colonists have a cheesy mechanical body suit they can wear out in the wilderness that serves as a forerunner to the suit Ripley would don a few years later to battle Aliens. And then, there's the aforementioned Mara, who manifests himself in his true form - a snake - in the series' climax. I actually liked this dumb and laughable effect; it's part of the charm of watching the old series. Still, there's a new CG version if you're interested in denying yourself of an epic battle between a large balloon snake and a dozen extras holding 5 foot mirrors. By the way, I won't spoil the nonsensical logic behind that strategy: check out the episodes yourself for that kernel.

Ultimately, Kinda is a memorable romp from the early Peter Davison era. Since I grew up with this series, perhaps I'm not the best person to judge these episodes. I thought they were fun, but it could be nostalgia on my part. From what I've read in the intervening years, this particular TARDIS crew has its fair share of critics, especially of Adric. And I will say that my personal favorite companion of the bunch - Nyssa - is nowhere to be found except at the very beginning and the very end of the serial. But, the concept of the plot is interesting, there's enough threads to keep one interested, and as I suggested before, the back-and-forth between Tegan and the Mara is nicely done. Kinda itself is a serial I would recommend to Doctor Who fans new and old alike; however, I'm bumping that up to a "Highly Recommended" based upon the plentiful extras included on 2 Entertain's DVD release (much more on these below).

Note: The Mara would return in a future Peter Davison television serial called Snakedance. This story has been concurrently released on DVD with Kinda and a review will be forthcoming on DVD Talk. Decades later, a third Mara story would occur, this time in a Big Finish full-cast audio production titled The Cradle of the Snake with Peter Davison, Sarah Sutton, and Janet Fielding resuming their original Doctor Who roles along with Mark Strickson as Turlough. It is available directly from Big Finish Productions here. 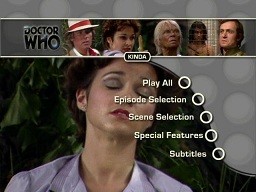 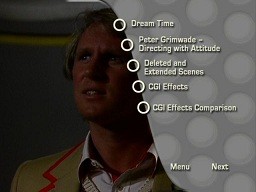 The episodes of Doctor Who: Kinda are presented in a full frame 4:3 aspect ratio that reflects its original television broadcast. The image looks as good as I've ever seen it with solid colors and okay detail - don't expect stellar blu-ray visual quality here, however, given the show's 1980s video production roots.

Wow. Where to begin on the extras? As usual for vintage Doctor Who DVD releases, Kinda arrives loaded with bonus material.

Let's begin with the audio track options. Actors Peter Davison, Janet Fielding, Matthew Waterhouse, and Nerys Hughes provide a spirited and jovial commentary for all four episodes. Plus, an additional option offers an isolated music score through each episode. If the idea of plowing through these alone doesn't appeal, then select the optional Info Text and listen to one of the previous extras while reading subtitles that provide thorough background on the production of Kinda.

Shall we move on to documentaries? Dream Time: The Making of Kinda (34:05) is a great extra with the participation of director Peter Grimwade, writer Christopher Bailey, script editors Christopher H. Bidmead, Eric Saward, and Antony Root, designer Malcolm Thornton, and a few of the secondary cast members. Peter Grimwade: Directing with Attitude (22:58) is a career retrospective, though it also feels like a continuation of the earlier doc. These are both presented in anamorphic widescreen.

And then there is the historical material. Deleted and Extended Scenes (14:37) presents cut footage spliced in with context footage from the show. The switch in visual quality is noticeable, but that doesn't detract from the curiosity factor this extra satiates. Trails and Continuity (4:16) has vintage lead-ins and end transitions from the BBC. Photo Gallery (4:45) streams stills from the show set to the episodes' score. And, the Radio Times Listings appear under PDF materials.

We're not done yet. An optional CGI effects sequence was created to replace the Mara balloon snake with a CG snake that looks like a reject from an Anaconda movie on the SyFy Channel. I'm not a particularly big fan of CG tinkering with vintage science fiction, but it's here if you're interested. A CGI Effects Comparison (1:36) shows the transmitted version and the new CGI version of the Mara showdown via split screen.

And then, finally, there's the promotional content. Coming Soon (2:20) shows clips from other Doctor Who episodes available on DVD. Commercials for the first Doctor Who season starring Matt Smith and the cable channel BBC America, it should also be noted, precede the main menu.

As you can see, this DVD will provide hours of informative extras for the obsessive Doctor Who fan. The uniformly excellent track record of Doctor Who DVD releases continues with Kinda.

Kinda is one of the trippier Doctor Who serials from the Peter Davison era of the original program and introduced the uniquely Fifth Doctor foe the Mara. It should be enjoyable enough for Doctor Who fans new and old alike, in spite of (or because of?) the final episode's memorable showdown with the Mara as it takes the form of a giant balloon snake. Given the DVD's bountiful extras, I'll go with a "Highly Recommended" DVD Talk rating.